Failed parents and the crisis of identity in the new generation…

Modernization is a concept that has increasingly become associated with urbanization. While, urbanization and modernization are essential for a developed nation, they have their own perils. One of the most alarming of such perils is the disassociation of the Indian youth from their Hindu religious identities. With busy work schedules and emphasis on modern, secular education; the parents often slack on other important fronts. Inculcation of traditional values and Hindu culture is on the forefront.

While this may seem as a redundant and fruitless exercise, with parents choosing to devote their and their child’s time in other professional or vocational skill development, the child ends up lacking on a spiritual level. Faith and culture occupy very important positions in an individual’s essence and lack thereof can be perceived as a huge void, waiting desperately to be filled with anything that the individual finds comforting.

The biggest such instance in recent times had been the Hadiya case, wherein a young girl named Akhila, not knowing better had been misdirected to adopt a faith different from her own. The naïve girl, ventured out of her house for the first time had encountered girls (Jaseena and Faseena) practicing Islam. Akhila was attracted to Islam by the timely prayers and good character of Jaseena and Faseena. Inspired by them, she learned about Islam on her own before the metamorphosis started. She started practicing Islam, refused to participate in her grandfather’s funeral rites and went to college wearing a headscarf. She also married a Shafin Jahan, through an objectionable marital website and changed her name to Hadiya.

Seeing the horrors unfolding in front of him, Akhila’s father, Asokan K. M, who has been an atheist his entire life and no doubt, brought his daughter up along the same lines, suddenly woke up from his slumber to claim “love jihad” and that his daughter had been “brainwashed” and “forced”; all while Akhila was claiming otherwise. After years of litigation, the Supreme Court upheld Akhila’s rights as an adult woman and restored her marriage.

Now, the question herein arises, who is to be blamed?

Akhila, who just wanted a feeling of comfort and belonging of faith, to have discipline and to be a part of something greater than human existence?

The college roommates, who were just preaching what they believe in?

The husband, who merely wanted to be with the woman who had voluntarily married him?

Or, the father, who having spent his life as an atheist had filled to inculcate faith and culture in his family?

The lack of family values as far as religion and culture is concerned is extremely prevalent, especially in the urban areas where nuclear families make up the majority of the populous. Though incidents like Akshila’s happen once in a blue moon, smaller incidents occur on daily basis which go unnoticed by the people. A recent instance of such an incident is a Tik Tok video by a group of youth who call themselves the “07”.

The members in the group, Faisal Shaikh, Hasnain Khan, Faiz Baloch, Adnan Shaikh and Shadan Farooqui had taken out a video in the wake of the Jharkhand lynching case which stated, “You have killed the innocent Tabrez Ansari. So when tomorrow, his progeny comes to extract revenge, don’t call him a Muslim terrorist”.

No doubt the video was aimed at inciting hatred for Hindus. In light of this illegality and immorality, the group’s Tik Tok account has been suspended and even a case has been registered against the perpetrators.

However, troubling as this incident is, it is the reaction of Hindu girls which is worrisome. The group has a huge fan following and in light of this, a number of Hindu girls have come out, offering support to the group against the unfairness of the suspension.

A brief glance at Hasnain Khan and Faisal Shaikh’s instagram page shows that despite the fact that Muslim people are calling for violence against Hindus, in a completely bizarre and puzzling turn of events, the Hindu girls were completely forgiving, criticizing the suspension and even going as far as to accuse the Hindus. 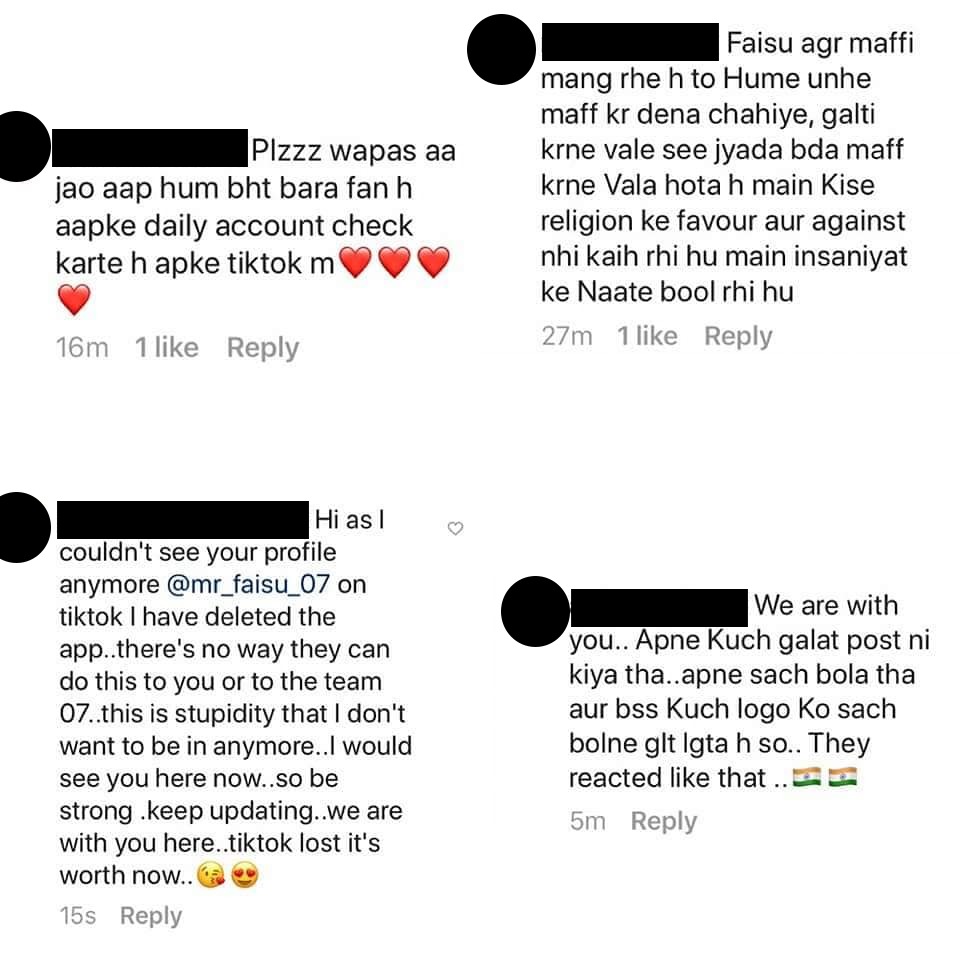 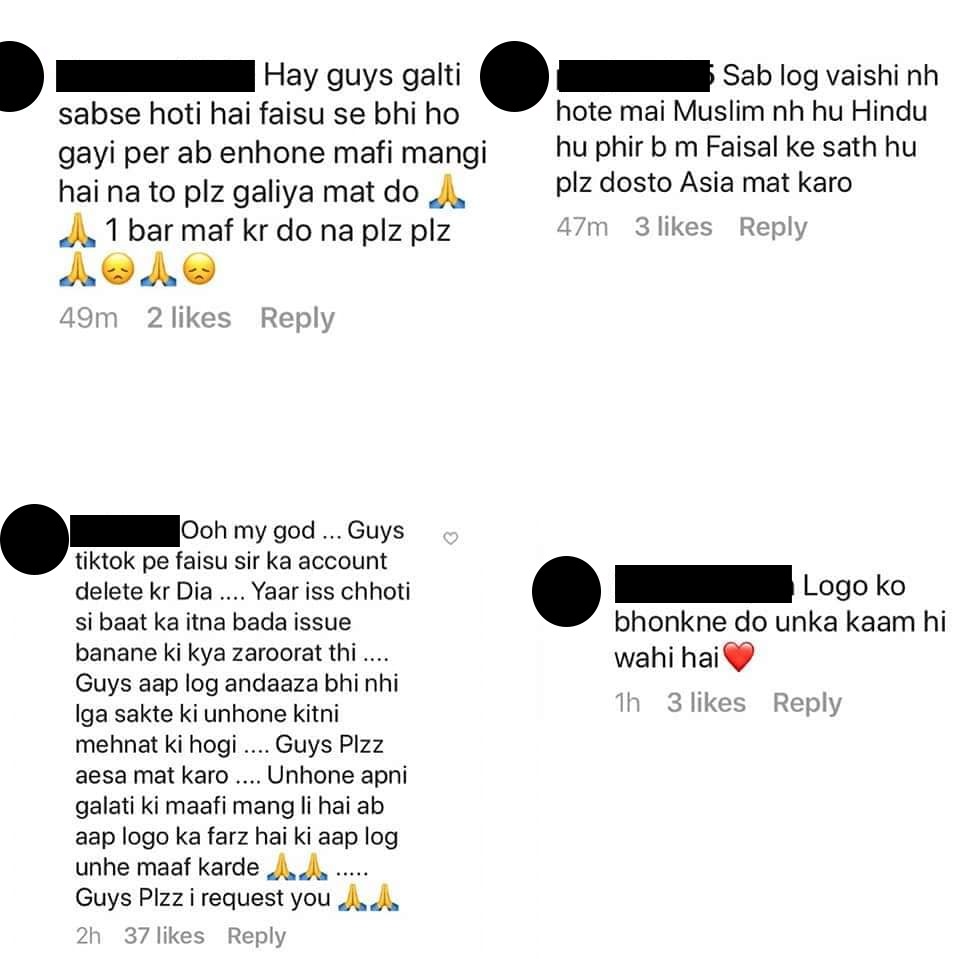 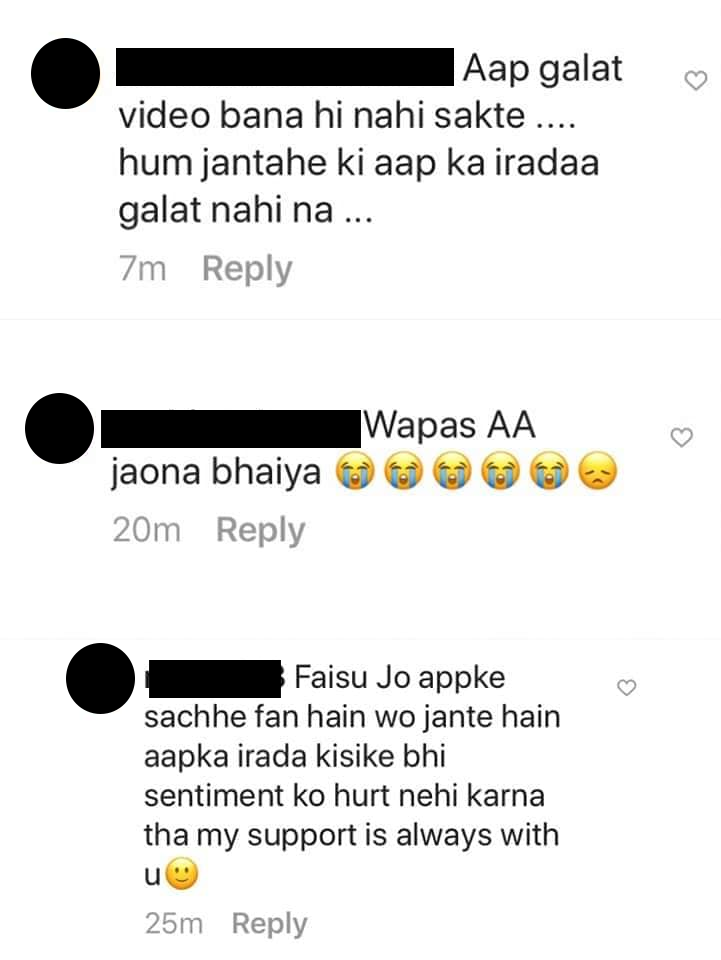 Social media, like everything else in the modern and progressive world has its boons and drawbacks. One of the more alarming drawbacks is the unholy influence on the young girls. The teenage Hindu girls, who are commenting and supporting 07’s video, are at an age where in their whole world revolves around their family life and school. Also, at this stage, whatever values the girls wanted to imbibe from their parents should already be well placed. Learning from home environment reduces after adolescence and the impact from school, friends and social media takes prevalence. In this situation, if a religious basis isn’t inculcated in the youth from an early age, or is substantially weak, the girls are more prone to get influenced from external agencies, as at this stage, they are quite naïve.

What is being clearly visible these days is that while the Muslims are decidedly protecting their faith; the Hindus are taking it for granted and thus, the importance of religion is diminishing from their lives. Islam commands strict discipline, and a majority of the children are taught Quran and praying at a very early age. Moreover, it is a cultural norm in Islam for adolescents to observe fasting and go on pilgrimages. Such discipline and ritual observation is clearly lacking in the Hindus.

It has been widely accepted that Hinduism is more than a faith- it is a way of life, and thus; individuals, especially those in the urban areas do not observe strict practices. Families in the urban areas rarely pray, observe fasts or even go to the temple. Rarely anyone in the urban area bothers to read the Bhagwat Geeta. Christmas is celebrated with much pomp and zeal, as opposed to the Hindu festivals such as Ram Navmi, Hanuman Jayanti and Navaratri, which are rarely celebrated. Only the ones such as Diwali and Holi form a part of an urban family’s calendar, which has more to do with commercialization than the actual observance of the rituals. The parents do not take any initiative towards their faith and this same attitude is imbibed by their children. Due to this ignorant and lackadaisical attitude, the very children of such urban parents today find no fault in a call for violence against the Hindus.

This sense of loss in the Hindus, as far as their faith, tradition and customs are concerned is detrimental to the existence of Hinduism. More so than that, the children are disassociated with their religious identities, which makes it easy for them to succumb to blasphemous activities. Sometimes it takes the form of a desperate want of spirituality, for which Islam comes as a perfectly gift-wrapped package, in others, it takes the form of young girls finding no fault in people spreading Hindu terror.