Taking anti-India propaganda head-on Prasar Bharati chairman Dr. A Surya Prakash slammed Vinod K Jose, Executive Editor of ‘The Caravan’ magazine for his blatantly misleading and propaganda-driven presentation during a session on ‘Religion and the Media’ at the Global Conference for Media Freedom in London. During his presentation Vinod K Jose had claimed that “a hundred Christians were murdered in India” and “the RSS engineered the pogrom against the Sikhs in 1984”.

Post Jose’s presentation as the discussions began Dr. A Surya Prakash stood up and demolished the skewed and agenda-driven presentation and said that many of the statements made by ‘The Caravan’ editor were “false” and cautioned the audience about the “inaccuracies” in the presentation.

Giving an idea of the scale of democracy in India, Dr. A Surya Prakash said that India is not only the largest democracy in the world but also the most vibrant. He also pointed out that around 600 million voters out of the total 900 million eligible voters had exercised their franchise in the recent parliamentary election. He also put out that Indian society is the most diverse in the world and further warned the audience that if they left the hall believing Jose, democracy across the world would be in jeopardy.

He also questioned the conference organizers, the governments of the UK and Canada for giving space to such propaganda-driven presentations. “I am pained by the decision of the organizers to have given a platform for such a blatantly anti-India presentation. I don’t think anyone is furthering the cause of democracy by running down the most vibrant democracy in the world,” he said. Pointing out the strength of democracy in India, Dr. Surya Prakash said, “Over 20 political parties govern India at the federal level and in the states, so it is wholly incorrect to state that one party runs the country”.

The Prasar Bharati chairman also pointed out that some activists who are not happy over the mandate given by the Indian electorate have been using such forums for peddling their agendas. Taking note of Prakash’s observations the Chairman of the session and the Minister of State for the Commonwealth and the UN, Lord Ahmad of Wimbledon said that he had the highest respect for India’s democracy.

Nonetheless given Caravans dismal record over years of agenda-driven reporting, Vinod K Jose’s presentation just continues the anti-India trend followed by the publication. Appointed as the executive editor of Caravan in August 2005 by his fellow Columbia University mate Anand Nath, grandson of Vishwa Nath, the founder of the magazine, Vinod K Jose is a vocal supporter of separatists like Syed Ali Shah Geelani and Afzal Guru, the mastermind of 2001 Indian parliament attacks.

He was also questioned by Crime Branch in New Delhi for the articles he had written in support of Geelani and Afzal Guru. He opposed the death penalty to terrorists and released a statement seeking clemency for Afzal Guru “I don’t want a fellow Indian to get the death penalty” read his statement. He is also a supporter of Maoist cause and posted the following picture with Maoist guerillas in central India’s Bastar forest. 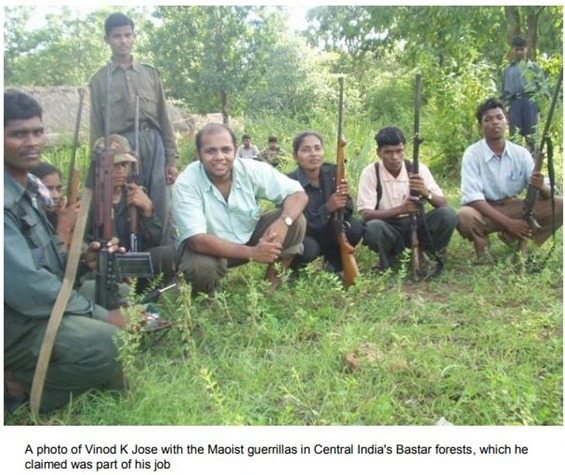 On one hand, he supports terrorists like SAR Geelani, and on the other, he calls VHP a militant and Hindu extremist group. Vinod K Jose even has problem with an economic advisor to Obama government being associated with VHP.  “The economist of Indian origin on President-Elect Barack Obama’s transition team, Ms. Sonal Shah, has one dubious credential on her resume–her relationship with the Hindu extremist group, Vishwa Hindu Parishad (VHP). This militant group was held responsible for the genocidal pogroms against Muslims in the western Indian state of Gujarat in 2002 that killed 2,000 people and rendered 100,000 homeless. Ms. Shah was the “National Coordinator” for the VHP in North America. So the lingering question is: why hasn’t the Obama team vetted enough on Ms. Sonal Shah’s Hindu extremist connections?” wrote Jose in Countercurrents.org, a leftist publication. And this agenda-driven presentation in London is just in continuation of his anti-India stance for long which has been further pointed out in this report.

Anti-India ‘NGOs’ fume as funding from Pakistan dries up