No Result
View All Result
Newswire
Rahul ahead in Orange Cap race, Rabada leads for Purple Cap 18 mins ago
Covid-19 remains public health emergency of int’l concern: WHO 22 mins ago
TikTok gets another reprieve from US ban 30 mins ago
Apple One with all services under single plan now available 36 mins ago
Greece, Turkey pledge mutual aid after 6.7-magnitude quake 40 mins ago
Political parties in Bihar have 2025 in mind while contesting 2020 polls (Comment) 42 mins ago
Next
Prev

The impact of American tariffs on Chinese economy has been very visible in the last few months. Encouraged by the Chinese losses, Donald Trump has announced that US will increase the tariffs on 200 billion dollars of Chinese goods to 25 percent from the existing 10 percent. The talks and negotiation to end the trade war is going on between China and United States and a Chinese delegation is expected to reach Washington on Wednesday. However, Trump is not pleased by the progress on trade talks and this was the reason behind increase in tariffs.

“For 10 months, China has been paying Tariffs to the USA of 25% on 50 Billion Dollars of High Tech, and 10% on 200 Billion Dollars of other goods,” said Trump. The 10 percent tariff on 200 billion dollars’ worth of Chinese imports was imposed on 24th of September last year. Trump threatened to increase the tariff to 25 percent by the end of the year if a trade deal is not struck. Four months in the ongoing year have passed but no deal has been struck and therefore Trump has decided to keep the promise. “The 10% will go up to 25% on Friday,” said Trump. 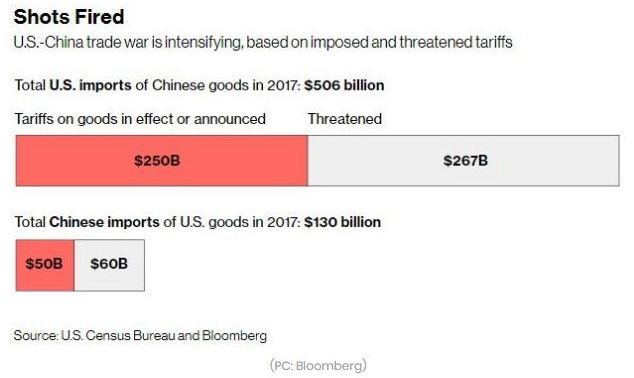 The US has a trade deficit of almost 700 billion dollars of which China accounts for almost half. Imposing import tariffs is rebalancing the trade relations of US with countries like China, Japan, Germany, Mexico etc. Trump is vehemently opposed to the current trade relations between America and China because they are heavily skewed in favor of China. In 2016, China was the largest goods trading partner with 578.2 billion dollars in total (two way) goods trade during 2016. Goods exports totaled 115.6 billion dollars; goods imports totaled 462.6 billion dollars. The U.S. goods trade deficit with China was 347.0 billion dollars in 2016. Trump was opposed to the fact that the Asian economy deliberately keeps the value of its currency low, therefore, making its exports more competitive in the international market. The American manufacturers were losing to Chinese because the labor was cheap there, and goods produced in America have become incompetitive.