In recent times, Twitter, as a social media platform has emerged to be as important as any leading national daily. It is the primary medium through which the tech-savvy and workaholic population of India gather their updates on country, politics and international events. It has also enabled the political parties to directly interact with the people, facilitating an enhanced leader-public interaction. More importantly, Twitter was also viewed as an alternative to mainstream media as those organizations are prone to biases and infiltration. However, the social media platform seems to have disappointed the people in this regard.

Twitter as a social media platform has always encouraged left winged voices, an advantage which the liberal elites in the country exercise to the fullest. However, in recent times, this encouragement isn’t simply limited to ideologies anymore but has expanded to the political spectrum. There has been a massive crackdown of the right wing voices on the platform, especially since the countdown of the Lok Sabha elections.

The most recent of the occurrence of this bias has been Twitter India’s own account. The handle was seen promoting the Congress party, which is at the forefront of the opposition parties against the current government BJP. BJP follows a centre right wing ideology and Congress is at the left of centre. Instead of being a neutral platform, Twitter India had not only re-tweeted about the Congress party president, Rahul Gandhi’s campaign but had also promoted it. Thereafter, it had done the same with the Congress General Secretary and the other heir of the dynasty, Priyanka Gandhi. Her interview with a blatantly leftist journalist, Rajdeep Sardesai was re-tweeted and promoted by Twitter India’s official handle.

Now I understand why so many pro-Hindu, pro- @narendramodi supporting accounts are being suspended by @TwitterIndia. Obviously, they are being paid by @INCIndia to promote ?? pic.twitter.com/U9aBRogGFs 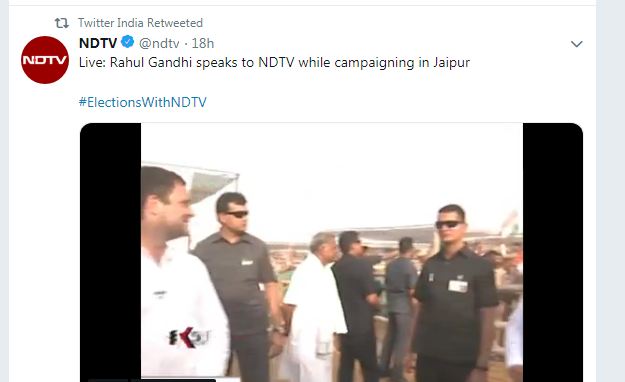 Twitter’s bias towards the leftist ideologies isn’t hidden from anyone. The social media’s CEO, Jack Dorsey has been quite vocal in his views against the right-wing ideology. Moreover, his vendetta against Indian right wing had reached its peak, wherein during his first trip to India, he attempted to create a divide between the citizens by holding a placard, “Smash Brahminical Patriarchy”. What is ironic here is that he attempted to inculcate “social liberation” for a country about which he knew nothing of; neither about its people nor about its problems. Nevertheless, hypocrisy is felt when it is realized that Dorsey would not be encouraging the same liberalism in other countries; such as, he will not go to China and demand free and fair elections there. India encourages an individual’s freedom to express so Dorsey decided to be liberal.

However, he has not extended the same freedom of expression on his own platform, which is precisely what Twitter is meant to do. Not only has the social media platform encouraged the left-liberal propaganda but has also banned several pages purporting rightist ideologies. The forefront of those is a handle called ‘True Indology’. The handle used to state specific historical facts using official documents and excerpts to clear the misconceptions the public held. The historical facts often went against the narrative that the leftist organizations wanted to preach and the disdain they felt over the ‘True Indology’ was visible. Soon after, the account was banned from twitter.

Jack Dorsey is entitled to his personal views, as is any individual. But his duty as a person holding an important position is to differentiate his views from his platform. Due to his blatant bias, the leftist views aren’t limited on ideological lines anymore and are interfering in the politics of the country. In the midst of the crucial elections, such biases will end up interfering in the free and fair electoral process of the country, highly detrimental to a democracy like India.