True Indology has been the primary and most popular account for all Indian historical exposes. Twitterati often use the account for fact checks on various issues pertaining to Indian history. The account, with the help of verified documents and excerpts from books and official accounts, accurately proves the discrepancies to spread genuine knowledge among the people. In the past, it has debunked many lies and false narrative spread by the liberal cabal in the country. In this regard, a number of such people who want to distort history for their own political and personal gains, suffer quite a lot. Due to this fearless attitude of True Indology, the account has been suspended a number of times when it exposed the real narrative, contrary to what was being peddled by the liberals. Recently, the account had been under radar for debunking a lie spread by The Wire Senior Editor, Arfa Khanum Sherwani. Following that, a day after a clearly leftist suspended IAS officer threatened the account, it has been suspended.

In an effort, motivated by a need to undermine the Yogi government and the Hindu history of the Gorakhnath temple, Arfa Khanum Sherwani stated, “In Yogi’s Gorakhpur, at the Imambada. Land on which Gorakhnath temple (Adityanath is its ‘Mahant’ or head-priest) stands was granted by a Muslim ruler, Nawab Asaf-ud-Daula of Awadh. He granted land to this Imambada too. India is far more diverse than what our hateful leaders project it”

In Yogi’s Gorakhpur,at the Imambada.
Land on which Gorakhnath temple(Adityanath is its ’Mahant’ or head-priest)stands was granted by a Muslim ruler,Nawab Asaf-ud-Daula of Awadh.
He granted land to this Imambada too.India is far more diverse than wht our hateful leaders project it pic.twitter.com/bmx6NqDwAu

In a befitting response to this, True Indology had sought to debunk the false claim. Bringing the fabrications in light, the history expert’s account had brought out several excerpts from historian’s accounts and the ASI.

As is clearly visible from the accounts, Gorakhnath temple has a recorded history of 800 years old, believed to be established by Gorakhnath himself. Gorakhnath was believed to come to the city of Gorakhpur in the Treta Yuga, the second of the four Yugas in Hinduism, believed to be the age of Lord Rama. 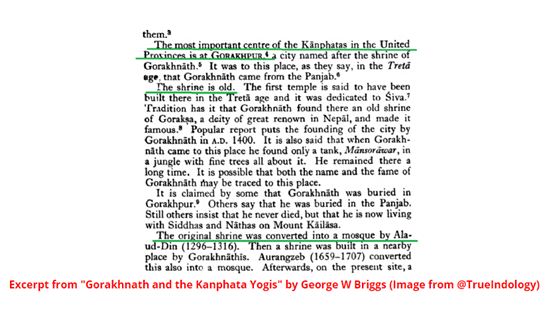 In a striking contrast to the claim that the land was ‘donated’ by the Nawab, the Gorakhpur Imambada itself was built on the former temple site. Following Cunnigham’s Archaeological survey of India, Sita Ram Goel lists the Imambada among former temple sites in his book ‘Hindu temples’. 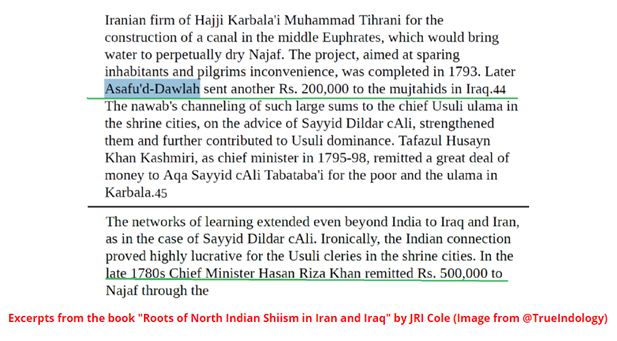 Nawab Asaf-ud-Daula, the Nawab claimed to have graciously ‘granted’ the land, was not even born during the time of the existence of the temple. As has been established above, the temple, which has a recorded history since the 13th century, was destroyed and converted into a mosque by Khalji. However, the Nawab ruled during the 18th century, centuries after the Gorakhnath temple.

There is not a single record or inscription which indicates that Nawab donated land for Gorakhpur temple. The only ‘source’ of this left liberal brigade’s claim is a recently fabricated spurious local myth that Nawab met Gorakhnath.

Due to the busting of this obvious lie, a lot of left liberals are perturbed as it causes a hindrance in their fake propaganda. In light of this, several left liberals including, a suspended IAS officer, had come out spewing annoyance. This officer, suspended for being suspected in the ‘blanket-tea scam’, has claimed to be a ‘student of history’ and has threatened to get the Twitter account of True Indology blocked. On an earlier occasion as well, when the account was setting the record straight for Arfa Khanum Sherwani, over the celebration of Holi, the same suspended IAS officer had gotten himself involved in the scenario. He had been caught quoting wrong information, and was publically called out by True Indology, outlining the culture and history of the sub-continent. With his pseudo intellect completely busted, the suspended officer, asserting his superiority had resorted to threats against the account. He threatened to get the True Indology twitter account blocked and even claimed to use his contacts of IPS officers to further breach the cyber privacy and disclose the identity of the admin operating the account.

Now, in light of the threats, the Twitter account of True Indology has been suspended. The twitter account suspension, however, is arbitrary. True Indology did not spread any false narrative or anything in furtherance of an organized propaganda. They merely sought to correct the misconceptions held by the people and busting the lies spread by left liberal brigade, by justifying their views with the help of verified documents and excerpts from historical accounts. Fearless in its approach, True Indology had sought the truth, irrespective of the left liberal narrative or what the powerful bureaucrats want the citizens to believe. This is where they blundered as even though India is a free democracy, the powerful often prey on the innocents. Now, the account has been banned, the decision, no doubt taken under the pressure of the liberal lobby.

India’s Defence Cyber Agency to become operational in May