PepsiCo, an American multinational which produces soft drinks and snacks, has sued four Gujarati potato farmers. The company asked the farmers to pay Rs 4.02 crores for ‘infringing its rights’ by growing the potato variety used in Lays chips, which is a product of the company. The company filed a lawsuit and the case was to be heard in Ahmedabad court. Gujarat government has stood for the farmers and it will join the ongoing legal battle to fight for the potato farmers. “We will be joining in the matter as a party to support farmers,” said a top government official. 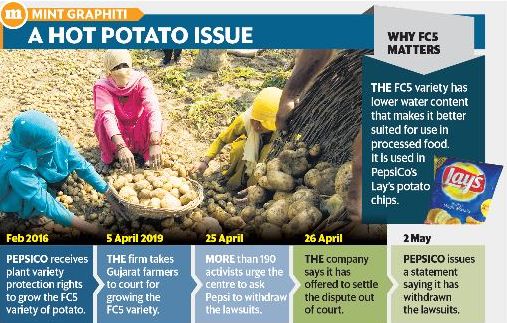 After Gujarat government decided to support the farmers, the company withdrew the cases. “After discussions with the Government, the Company has agreed to withdraw cases against farmers. We are relying on the said discussions to find a long term and an amicable resolution of all issues around seed protection,” said a PepsiCo spokesperson. This is a victory for the potato farmers and Gujarat government. Apart from the pressure from Gujarat government, the protest against PepsiCo by potato farmers union, onion farmers union was also responsible for company’s retreat. The company also fears boycott by the consumers, given the angry reaction against lawsuit on social media. 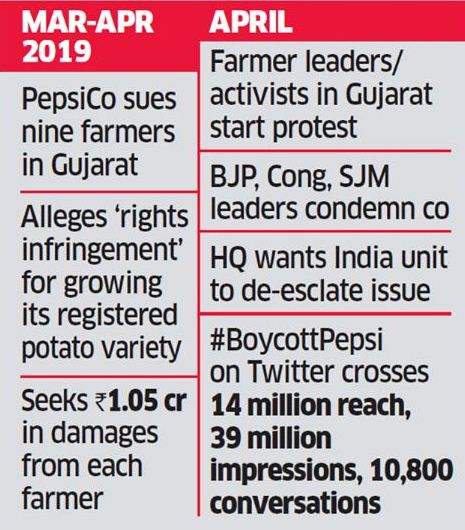 The company has sued nine potato farmers in the last two years for growing the potato variety used in Lays chips and withdrew case against all of them after Gujarat government stepped in on the side of farmers. Given the fact that intellectual property rights movement is in its initial stage in the country, the PepsiCo case would set a precedent.  “It is important that no wrong precedent is set, given that this is a test case which could affect other farmers across the country,” said Anand Yagnik, the lawyer representing four farmers from Sabarkantha district.

In the last few years, potato production in Gujarat has grown at a very healthy rate. It produces 33 lakh tonnes from the 1.21 hectares of land dedicated to potato farming. Banaskantha, a district in northern Gujarat became the largest potato producing district in the country by overtaking Agra district in western Uttar Pradesh.

Earlier, the farmers asked the Protection of Plant Varieties and Farmers’ Rights Authority (PPV&FRA) to make submission on their behalf and fund the legal proceedings through National Gene Fund. “These farmers are small, holding around 3-4 acres on an average, and had grown a potato crop from farm-saved seed after they accessed the potato seed locally in 2018,” read the letter sent to PPV&FRA.

Agriculture has grown exponentially after Narendra Modi came to power in the state. The growth of agricultural produce was in double-digits in state in last one and a half decade. The opposition has accused Modi government of being anti-farmer. But it is the Modi government which implemented PM-KISAN under which more than 12 crore farmers’ families would get 6,000 rupees per year. The pro-farmer stance of the Gujarat government helped the agriculture to grow at double-digit rate. The farmers in Gujarat are in a better condition compared to the condition of farmers in any other state of the country. The state became the largest cotton producer under BJP government. Other states can learn from Gujarat on agricultural practices and policies.