Credit growth in the infrastructure at a 5 year high

Slow credit growth due to Twin Balance Sheet problems (the banks in the country could not lend due to capital shortage and companies did not apply for loans because they were not able to pay back the money borrowed earlier) has been a problem for economic growth since the Modi government came to power. In order to clean up the burden of Non-Performing Assets, RBI implemented very strict norms on lending and credit dried up. The banks were also not well capitalized given the 10 lakh crore rupees NPA burden. The slow credit growth resulted in a slowdown of the economy. However, as the institutional structure of IBC is in place to solve the NPA problem and banks has been capitalized with 2.11 lakh crore rupees from government, the credit growth has started to pick up.

The large companies faced hard time in last few years and the credit grew at only 1 percent. However, this year loan to corporate grew at 8.2 percent to reach at 24 lakh crore rupees. “Our sense is that a large part of the spike is because of working capital requirement of large corporates,” said Prakash Agarwal, head financial markets, India Ratings and Research. “Because of GST, the working capital cycle of corporates may have gotten elongated which warranted a slightly larger requirement of working capital.” Infrastructure has taken major chunk in credit with 18.5 percent this year compared to decline of 1.7 percent in last year while credit to ‘other infrastructure’ grew at 53 percent. Telecommunication sector which expanded exponentially in last few years secured 36.7 percent more loan compared to last fiscal year. The retail loan grew in double digits at 16.4 percent to 22 lakh crore rupees. 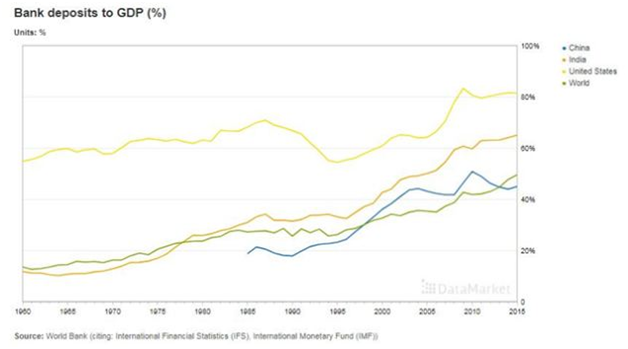 The credit to GDP ratio is around 52 percent while deposit to GDP ratio is 67 percent. The credit to GDP ratio is very low in India compared to the global average of 104 percent and China’s 155 percent. The deposit to GDP ratio in the country is high compared to global average of 49.5 percent and Chinese average of 44.95 percent. So, India has better deposit rates but the credit growth is still lower due high lending rates. The previous governors of RBI (Raghuram Rajan and Urjit Patel) kept the lending rates very high even by conservative estimates. The high loan rates hurt the economy as the lending grew at very low pace and thus economic activities slowed down. RBI is considered among most conservative central banks and the cost of capital in India is very high compared to other emerging markets around the globe.

The Modi government brought Insolvency and Bankruptcy Code (IBC) to solve NPA issue. The difficult phase for banking is over and banks got a substantial amount of money back through resolution of many bank loan cases. The Central government also decided to pump money in public sector banks to increase capital adequacy. Now the things have become better and it is expected to improve further because banks have enough capital and the corporate sector is willing to take loans given the low rates. The growth in credit will result in investment in markets and therefore economic growth will improve further.

Before Bofors, Rajiv Gandhi was involved in questionable deals with Boeing and Airbus