The real estate consultancies have estimated that housing across major Indian cities has become more affordable under the Modi government. The factors responsible for this is government subsidies and incentives, lower home loans rates due to the cheap cost of capital, high-income growth in last few years, low inflation in the housing sector. The investment of black money in the real estate sector ended the monumental step of demonetization. Demonetization brought the real estate prices to new low and curb on black money has kept housing prices low. Under the Pradhan Mantri Awas Yojana (PMAY)-Urban, the government gives incentives and subsidies to Economically Weaker Section (EWS) and Low Income Groups (LIG). This brings down the price of home by 1-3 lakh rupees for EWS and LIG. 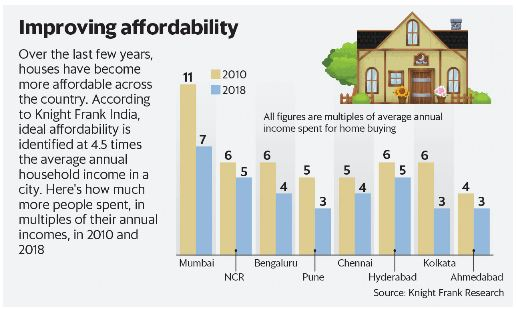 JLL India, a real estate consultancy firm published Home Purchase Affordability Index (HPAI). As per the report, “Affordability improved across India’s key markets from 2014 to 2018 led by favourable home loan rates,” In 2013, under UPA government only Hyderabad was affordable among 7 major cities (Mumbai, Delhi NCR, Bengaluru, Chennai, Pune, Hyderabad and Kolkata) of the country, the situation improved drastically under Modi government and now all of them except Mumbai are affordable. A city is considered affordable if the price of a 1,000 sq.ft apartment is less than 4.5 times of the average annual household income.

The primary reason for increased affordability is low housing inflation and high-income growth. The property prices grew only by 2 percent between 2014 and 2018 while the average income growth for the middle class was 9 percent. The 7 percent additional income made the cities more affordable. The income of the middle class also grew under the UPA government but the property prices rose exponentially. The Congress party has not been able to tackle down the black money investment in real estate and this pushed the property prices by 15-20 percent every year. The average property price growth under Modi government has been 8-10 times lower compared to the UPA era.

The property prices are expected to remain low in the next few years and affordability will increase. Therefore if Modi government is voted back to power, every middle-class family would have their own house by 2022. “Affordability levels will continue to improve over the next three years for all seven cities. Over the same period, we expect a steady increase of 3-5% in property rates and 8-9% increase in average annual household income and home loan interest rates to remain range-bound,” said Samantak Das, chief economist and head of research, JLL India.

RBI has reduced the policy rates by 50 basis points in the last two monetary policy meetings. The home loan rates are expected to be cheaper in upcoming months and this would further increase the affordability. The government also plans to bring cement in 18 percent tax bracket from 28 in next GST council meeting. The input cost would be lower and the houses would be sold at cheaper prices in upcoming months. If the Modi government is voted back to power, the chances of middle-class families owning a house would increase.