Congress is in for another embarrassment in 2019 polls

by Mayank Narayan
in Trending
0

With just a few days left before the nation goes in to vote for the 2019 general elections, clouds of doubts over Congress’ performance are getting clearer. The party, coming up with its new plans, has also decided to field their president from a minority dominated constituency Wayanad, Kerala. This comes after Smriti Irani has emerged as the popular candidate in their erstwhile bastion in Amethi, Uttar Pradesh.

The party claims that the move will be critical in ‘rejuvenating the South’ but it is surely not doing any good for itself in terms of votes. After getting limited to just 44 seats in the 2014 general elections, prospects for congress in the upcoming 2019 elections also look meek.

Dr Praveen Patil, Founder & CEO 5Forty3 Data labs, in his article in ‘The Gaze’ has provided a deep insight in Congress’ current situation and most importantly its prospects in the 44 seats where it registered a victory in 2014 general elections.

We have been tracking the 44 seats where Congress defied the 2014 wave… Guess what, INC is in big trouble outside the 8 seats of Kerala that it had won.
If you thought 2014 was the nadir of the Congress party, think again!https://t.co/8Nj2gmGj5o

“In the 2014 anti-Congress wave, the grand old party managed to win 44 Lok Sabha seats spread across 5 different zones. These 44 MP districts are important demographics that defied the overwhelming Modi wave and overcame the anti-Congress sentiments.” 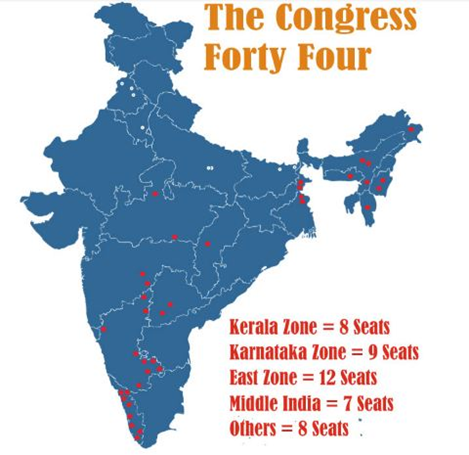 After the makeshift alliance in Karnataka with the JD(S), Congress has been fighting an uphill battle in the state. With people losing patience over unfulfilled promises, the party’s electoral plans might also remain patchy.

According to the article, “In the Karnataka zone where Congress had managed to win a maximum of 9 seats in 2014, there is secular decline in support to the party across the 8 districts. In fact, the situation is such that apart from the Bangalore Rural parliamentary constituency, Congress is facing extremely tough battles in all the other 7 seats. For instance, take the case of Gulbarga LS seat which is represented by Mallikarjun Kharge the leader of the UPA in parliament that is seeing a tougher fight this time than in 2014. Four strong Congress leaders and former ministers have deserted the party and are now helping BJP defeat Kharge in Gulbarga district. As of today, the only positive factor for Kharge is that he is outspending BJP by almost 2:1 in this otherwise uphill battle of Gulbarga”

States like Madhya Pradesh and Rajasthan, where they were successful in registering a marginal victory towards the end of 2018, have not seen considerable improvement in Congress’ position, However, they are to benefit slightly from marginal decrease in BJP’s popularity.

The article goes on to suggest, “The central zone consisting of Maharashtra, Telangana, Madhya Pradesh and Chhattisgarh. Considering that Congress had performed pretty well in two of these states just 3 months ago, we were expecting a solid performance by the party here. Surprisingly, Congress position has not improved at all as compared to 2014 even in this region, but what may give it a bit of solace to Congress is that BJP’s position has marginally declined here.”

In the North East, where NDA has been registering victories one after the other, the Grand Old Party’s position is extremely fragile.

“In Assam and the North-East, Congress is virtually fighting to stay relevant in the longer run as 2019 is beyond reach for them.”

Except for Kerala, the support for the party in the other four zones has further shrunk which is not a good indication as they are already struggling to find alliance partners. Rahul’s detour of Kerala might help him secure a seat in the 17th Lok Sabha, however, it sure is not going to help the sinking ship of Congress.

Follower of Dharma, Student of Politics and Governance, yoga enthusiast and a Chemical Engineer.