The dates for the 2019 elections have been announced by the Election Commission this evening at 5 pm for the 543 Lok Sabha seats. The dates were announced by CEC Sunil Deora during a press briefing held in Vigyan Bhawan. The election will be held in 7 phases in April-May. The dates are (phase-wise): 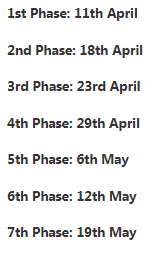 Results will be announced on 23rd May. In 22 states, voting will be held in a single phase.

This will signal the start of a gigantic voting exercise that will see Prime Minister Narendra Modi seeking another term in office and the opposition attempting to join forces to put up a strong fight. The present Lok Sabha term will end on 3rd June 2019.

The state of Jammu & Kashmir, which has been under the Governer’s rule (subsequently, President’s rule) since 2018 will be going for parliamentary polls in 5 phases.

The Model Code of Conduct, which lays down the dos and don’ts ahead of the elections for the political parties and their candidates, has come into effect with the announcement of the dates.

Reminiscing the past, in 2014, Prime Minister Narendra Modi’s party, the BJP, became the first party in three decades to win a majority on its own; the BJP scooped 282 of the 543 seats in Lok Sabha, where the majority mark is 272. The BJP-led National Democratic Alliance (NDA) won 336 seats. The Congress was voted out of power after two terms and was reduced to just 44 seats. It could not even qualify for the post of the “Leader of the Opposition”, for which a party needs 10 per cent of the seats in the Lok Sabha.

CEC also announced that VVPATs will be used in these elections along with EVMs. He also added that 90 crore voters will cast their vote.

These are the first elections in which those born after the 21st century will be eligible to vote, so high number of youth participation is anticipated. According to reports, 84 million new voters will cast their votes this election.

Most people watched ‘Birdman’ but very few understood it