The art of pseudo-liberal propaganda

Purpose: Why this article?

The goal of this article is to bring forth to the esteemed reader, the operational strategy of a “Pseudo-Liberal” in an objective manner.

Importance: Why should I read this article?

Time and again, history has shown that the success (or failure) is largely determined by the tools that are employed. For example, the nation of a geographically tiny island in Europe (the British) officially ruled the whole of India for nearly 90 years due to the tools they employed effectively; a combination of “Gun Powder” and “Divide & Rule Strategy”. Similarly, the people of India were able to overthrow the mighty British Empire, once again due to the powerful tool of “National Unity”. Having emphasized the importance of a tool, be it in any aspect of life from social to political to spiritual, let us begin this journey to explore the tools of a “pseudo-liberal”.

Definition: Who is this “pseudo-liberal”?

In simplest of terms, a “pseudo-liberal” is basically an individual who utilizes liberal human values (like liberty and equality) for personal gains be it for monetary gains (money or assets) or for fame (awards or influence).

Characteristics: How can one identify a pseudo-liberal?

As the name indicates such an individual inevitably indulges in hypocrisy, thus deluding the very human values one stands for. For example,

Tools of a pseudo-liberal

Direct propaganda, which is the primary force of a pseudo-liberal relies on the powerful strategy of “half-truth”. “Half-truth” is a strategy which takes the viewer’s confidence by reporting an event partially, and gradually leads the viewer towards the propaganda by selectively omitting the information. For example, “Mr. Narendra Modi accepts a green shawl but refuses a skull cap” is the totality of the event. But the headlines highlight the aspect of “the refusal” while deliberately omitting “the acceptance” part of the totality.

Indirect propaganda: Here comes the second tool of a pseudo-liberal which is designed to operate on the level of emotions. It is said that laughter lightens the heart. Propaganda can be easily coated with a humour which can penetrate and loosen the emotions. Once the power of emotions is lowered using a humour (stand up comedy or laughter shows), the direct propaganda then takes over. These are the two principle tools used by pseudo-liberals in achieving “their” success. 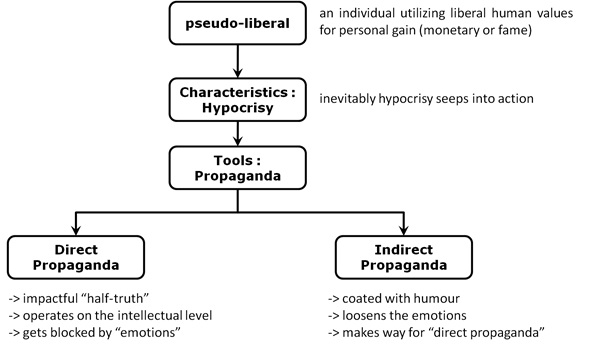 While Sadguru bats for stricter action, Delhi govt. sits on files to save Tukde-Tukde gang