In a bid to counter the rising popularity that BJP has garnered in the run-up to the Lok Sabha elections 2019, Congress has released the ninth list of their Lok Sabha candidates. However, what has surprised many is the inclusion of Karti Chidambaram in the list. According to the list, Karti Chidambaram will contest the elections from the Sivaganga constituency in Tamil Nadu.

Karti Chidambaram said, “I firmly believe the strength of the party and the alliance will help me win the Sivaganga seat. This is the second time I am contesting elections.”

Apart from Karti Chidambaram, 9 other candidates have been revealed by the Congress party in the recently released list. Interestingly, Karti Chidambaram is contesting from the seat as he did in 2014 when he was pitted primarily against BJP National Secretary H Raja, though both of them ultimately lost to AIADMK’s Senthilnathan. Interestingly, Sivaganga is the same constituency from where the party had successfully fielded P Chidambaram in 2004 and 2009. 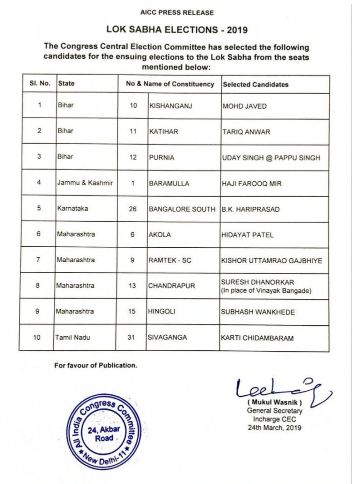 Karti Chidambaram is the son of former union minister P Chidambaram. He is a businessman, who has been accused of embezzling funds worth billions of rupees in the controversial Aircel Maxis case. He was arrested by the CBI in a money laundering case in 2018 and is currently out on bail. Fun fact, almost his entire family is currently out on bail, having been accused of indulging in corrupt transactions in various cases.

This also exposes the penchant for corrupt candidates within the Congress party. The fact that they don’t care a straw about clean candidates is reflective from their alliance with DMK. Let it be known, that most of the top brass of DMK, especially leaders like Kanimozhi, have been accused of embezzling funds to the tune of millions in the 2G scam.

Former UPA minister and grandnephew of DMK founder M Karunanidhi, Dayanidhi Maran was accused of indulging in corrupt transactions in the same Aircel Maxis case, in which Karti Chidambaram and his father have been accused of the same. As such, it would be interesting to see whether the people of Sivaganga fall for this decision or teach Karti Chidambaram a tough lesson, as they did in 2014.

A Hindu urged Malala to condemn atrocities against Pakistani Hindu girls. She blocked him