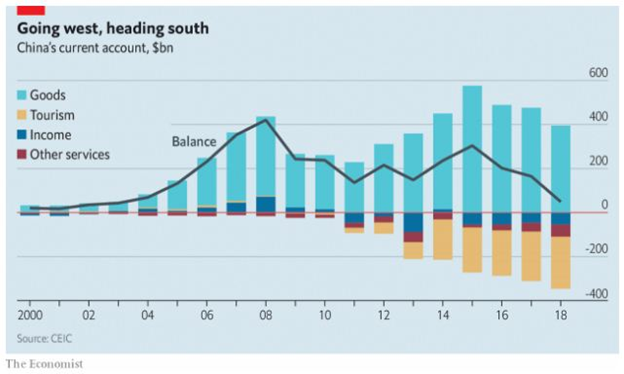 For the last three decades, the country posted double-digit growth riding on exports and savings. China became ‘factory of the world’ and this enabled the communist government to post the largest current account surplus in the world. The saved money was accumulated in foreign exchange reserve which has reached 3 trillion dollars, more than the GDP of India for the fiscal year 2018. The communist government sitting on the pile of 3 trillion dollars reserves, flooded the world with cheap capital. Xi Jinping came up with One Belt, One Road initiative under which China gave cheap loans to countries across the world to build infrastructure.

The only conditionality of getting cheap loans from China was to award the projects to Chinese companies. China has huge leverage to countries like the United States because it financed the deficit American government through its current account surplus. The countries across the world were indebted to China because it gave cheap loans, financed the government deficit and made investment in companies. With the narrowing current account surplus and the prospect of posting a deficit, the leverage China has over the world will slowly diminish in upcoming years.

The ongoing trade war has taken a heavy toll on the Chinese economy and its exports. Chinese exports witnessed the biggest fall in three years in the month of February. The exports plunged by 20.7 percent in comparison to February last year. The news of the exports fall has taken a heavy toll on stock markets which plunged sharply. The fall in exports is substantially greater than 4.8 percent drop estimated in the Reuters poll of economists. The imports of the country also fell by 5.2 percent. The high tariff by the American government is the major reason behind the sharp fall in Chinese exports. “Tariffs are weighing on shipments to the US,” said Julian Evans-Pritchard, Senior China Economist at Capital Economics.

The trend in the last few months gives a clear indication that the Chinese growth story is over. For almost 4 decades, the Chinese economy registered near a double-digit growth but now it is not able to sustain the same. The country has posted quarterly growth of 6.5 percent in the September quarter. This is the lowest quarterly growth in the decade and China has never been in such a bad condition since the global economic slowdown of 2008-09.

Winter’s here! Now, Chinese soldiers are falling like snowflakes in the winters of Ladakh