The Insolvency and Bankruptcy code is making defaulters pay their dues

Hundreds of promoters who argued that they do not have money to pay back the loans to banks are now lining up to pay their dues. Now suddenly money fell in their lap out of thin air after the Modi government implemented the Insolvency and Bankruptcy Code (IBC). The newly implemented insolvency law has the provision that the promoters could not bid for their company if the case is admitted in National Company Law Tribunal under IBC. One such company, Jaiprakash Associates has made a second attempt to pay up 10,000 crore rupees for debt repayment.

The proposal comes after NBCC, a state run construction company and Suraksha Assets Reconstruction Company made presentations to a Committee of Creditors (CoC) to take over Jaypee Infratech. In a desperate attempt to wrest back control of the company, Manoj Gaur offered to clear dues within 90 days of the settlement complete all the real estate projects within four years. If 90 percent of the lenders and home buyers vote in favor of Gaur’s latest offer, the case could be withdrawn as per section 12A of IBC. 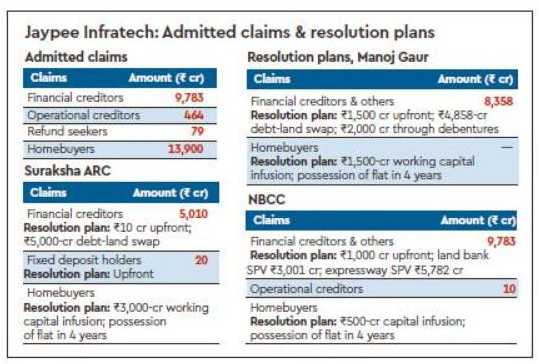 Jaypee Infratech has a 9,800 crore rupees debt with many lenders which include IDBI, IIFCL, Axis Bank, Bank Of Maharashtra, Corporation Bank, ICICI Bank, IFCI, J&K Bank, LIC, SBI, Syndicate Bank, Srei Equipment Finance, and Union Bank. The home buyers will also be treated at par with home buyers as per the recent amendment in the IBC law.  Jaypee Infratech is developing 32,000 flats primarily in Noida and Greater Noida of which 9,500 have been delivered.

According to corporate affairs secretary Injeti Srinivas, 3 trillion rupees have been recovered so far over two years due to the implementation of IBC. 3500 cases with defaults of around INR 1.2 trillion rupees were withdrawn from the NCLT because creditors recovered money by threatening the debtors about going through IBC. However, the pace of resolution under IBC is still slow despite the fact that law has put a time constraint.

The gross NPA of the country is INR 10 trillion rupees which is equal to 6 percent of the economy of the country or equal to the GDP of West Bengal.  India has the second largest share of bad debts in the world with 9.6% NPAs of total loans. Only Italy is ahead of us with 16.4 % of NPAs, while other major countries like the US, China, and Japan have 1.1, 1.7, and 1.3% of NPAs respectively. The huge NPAs hurt the lending capacity of banks and as expected, a credit crunch took its toll on economic growth. The government has to put 2.11 trillion rupees in public sector banks to revive the credit and push capital adequacy to Basel III norms.

The Insolvency and Bankruptcy Code (IBC) is proving to be the most powerful weapon against the NPA problem, even the Economic Survey 2018 mentioned that the new Insolvency and Bankruptcy code (IBC) was helping to improve the health of the banking sector.  Earlier several Indian companies were defaulting on their loans intensely because initially there was no law to dissolve their companies. The promoters were sure that the management of the company will not go out of their hands. They were taking loans from the government banks by bribing the employees with the intention of never returning the loans back. Since India brought the Insolvency and Bankruptcy Code, companies are now running after the banks to pay back their dues, because the IBC rules barred promoters of companies that are classified as non-performing assets (NPAs) from bidding for these companies.

Amar Singh donates his Azamgarh property to the RSS