One problem Indian companies and financial markets have faced since decades is low investment by common people in stock markets. The crunch of retail investor has forced the companies to go to banks and other financial institutions for capital required to start new operations. They were also dependent on Foreign Institutional Investors (FII) to raise good amounts of capital. But this huge problem is on the way to get solved as the number of retail investors has grown exponentially in recent years. Middle class families are diverting their money ‘dead investments’ such as real estate and gold to stock markets. The rising number of dematerialized accounts (Demat account – A type of accounts which enables the person to invest in stocks and bonds) and exponential growth in mutual fund valuations is a proof of this. 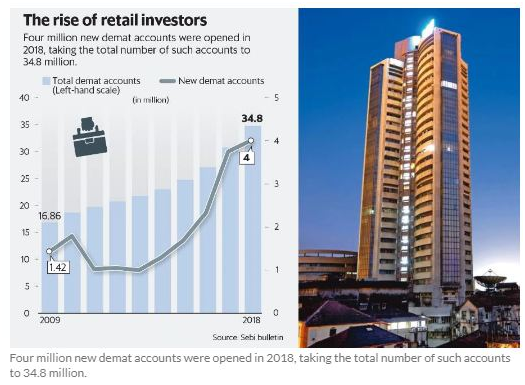 The number of Demat accounts has grown by 4 million in 2018, this is a 13 percent increase from the previous year. The total number of demat accounts in the country doubled in last decade. In 2009 there were 16.86 million demat accounts in the country and it rose to 34.8 million in 2018. This shows the rising appetite of the Indian middle class to take risks for good returns. According to Nikhil Kamath, co-founder and chief investment officer of the brokerage firm Zerodha, “with the push towards financial inclusion, a new set of participants have bank accounts now. We see a considerable influx in the middle-income groups which are now diversifying from gold and real estate into the financial markets. Along with easier access to stock markets, we see the number of accounts opened in India increasing each year exponentially.”

However, the exposure of the Indian population to stock markets in still very low. Less than 10 percent of Indian people are active in stock markets while for developing countries it goes up to 90 percent. But, the number of active people in the stock market in growing exponentially.  The number of registered investors at the Bombay Stock Exchange (BSE), one of two major stock exchanges in India has witnessed 14.22 percent growth last year. According to the data available with BSE, registered investors or clients (direct equity investors and mutual fund investors using BSE platform) has grown to 4.01 crore as of August 24, 2018 riding on 49,95,854 new investors added last year.Maharashtra has experienced the sharpest rise in the number of retail investors. It added 10 lakh clients (13 per cent) while the neighboring state of Gujarat added over 8 lakh investors. States like Uttar Pradesh, West Bengal , Bihar, Odisha which is very backward in terms of percentage of people investing in stock market has also witnessed rise. Uttar Pradesh added 3.4 lakh new investors while Tamil Nadu and West Bengal 3.34 lakh and 3.01 lakh respectively. The national capital territory of Delhi added 2.64 lakh investors. Odisha saw a 21.8 per cent jump in new investors, Bihar and Haryana grew at 19.7 per cent and 16.1 per cent, respectively.

The investment through mutual funds is also growing at exponential pace since the introduction Systematic Investment Plan (SIP).  The mutual funds made stock market investment accessible to common people of the country and democratized the system for small savers. The return in Indian stock market is significantly high due to the good performance of Indian companies, this is also one of the reasons behind the positive sentiment of investors. In another milestone for the Indian Economy, the Indian Stock Market has overtaken Germany to become the seventh largest in the world. According to a report by Bloomberg, India surpassed the equity market of Europe’s largest economy, Germany for the first time in seven years.

The rising number of investors in stock markets is healthy for the economy of the country.  If the investment is in the stock market, then the company gets the money and invests in further projects, which increases market activity and hence spurs economic growth. The government has the records of investments in the stock market and it taxes the gains from investments in equities. The government collecting more taxes is good for both the individual and society, because the money collected from taxes will ultimately be used for the development of the country.