In the last few days, there has been a debate on the issue of unemployment in the country. The latest data on the unemployment in India which is yet to come in the public domain requires to be verified. The National Sample Survey Office (NSSO)’s periodic labour force survey (PLFS) has compelled the media to reach a misleading conclusion based on half-baked data. The comparison of PLFS findings with Employment-Unemployment Surveys (EUS) has shown large jump in unemployment in the country. PLFS is a two-year pilot program which seeks to answer the problems in data collection on jobs, it includes a quarterly urban and yearly rural survey on jobs data.

However, the PLFS data and EUS data cannot be compared as both of these use completely different methods of data collection. To quote an article by NITI Aayog CEO, Amitabh Kant, “The PLFS estimates India’s total population in 2017-18 to be lower than the EUS 2011-12. If we were to accept all such comparisons at face value, we should also be having the headline that India’s population declines in the last 6 years.” But there is no case of a population decline and almost all official estimates have acknowledged that population in the last 6 years have increased only. On the other hand, the PLFS data estimates that the level of urbanization in the country in 2017-18 is same as 2011-12.  Again every credible organization including NASA’s satellite imaginary has shown exponential growth in urbanization in the country.

The PLFS data also shows that the absolute number of people employed in the country has declined by 20 lakh per year since 2011-12. However, there is no reason to substantiate the findings that the number of jobs declined in the last 6 years. The GDP of India has grown by more than 50 percent in last 6 years with exponential growth in infrastructure development. The noteworthy fact is that the infrastructure sector has been a major source of employment. The PLFS data also points out a decline in labor force participation rate but does not mention the rising number of years the youth spends in the country.

Moreover, the PLFS data cannot be given much heed as the sample size is very small. The survey was conducted only in 55,000 households which accounts for just 0.03 percent of 160 million households of the country.  On the small sample size, Kant writes, “In urban households one household giving wrong answer in each area will show labour force participation rate number in the range of 25 per cent.”

If the PLFS survey is to be considered as a standard employment survey, the methodology and the sample size need to improve. The comparison should start from next year when PLFS survey 2018-19 comes out as it will give a proper base of PLFS survey 2017-18. Till then, various data from different organizations can be used to get the real picture of employment generation in the country.  As per the data from the Employee Provident Fund Organization (EPFO), the number of new subscribers to social security schemes is at an all-time high. A total of 73.50 lakh new subscribers have opted for EPFO benefits from September 2017 to November 2018. In the month of November 2018 alone, 7.32 lakh new formal jobs were created which is higher in comparison to 4.93 lakh in November 2017, as per EPFO payroll data. This is a 48 percent increase in jobs compared to the previous year.

The Employee State Insurance Corporation (ESIC) and the National Pension Fund (NPS) presents a similar picture on formal job creation in India. From September 2017 to November 2018, almost 1 million people were registered with ESIC. As per NPS data, the country is adding more than 600,000 jobs in the state and central governments.

As per an article by TV Mohandas Pai & Yash Baid in the Financial Express, the transport sector generated 34 lakh jobs in FY 18 while in the first 9 months of FY 19, almost 28 lakh jobs were created. The data from Society of Indian Automobile Manufacturers (SIAM) and the Tractor and Mechanization Association (TMA), the apex bodies for the automobile and farm mechanization, (for tractor sales) give a clear picture that job creation has grown at a steady pace in the sector. 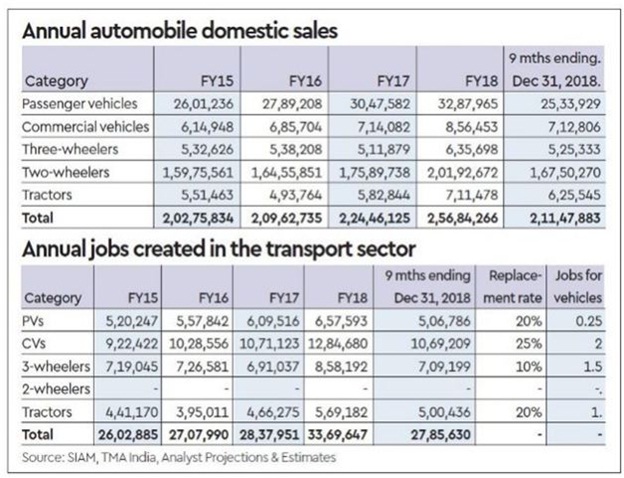 There are various agencies which measure unemployment with entirely different methodologies leading to different conclusions. The 2017 data published by International Labor Organization (ILO), a UN agency suggests that India’s unemployment rate stood at 3.5% in 2017 (3.3% for males and 4.2% for females), much lower than the global average of 5.4%.

The middle class of the country is leaving low-quality jobs as enough number of formal jobs are being created in the country. The major problem in the country is a lack of high-quality jobs but not jobs. To put it in perspective, if one looks for household help i.e. mechanic, electrician, car washer, delivery boy, one seldom gets it, as they generally charge more than a so-so engineering grad. A battery rickshaw puller in Delhi earns more than an engineering grad, therefore, India needs to create more ‘formal high-quality job’.