by Shantanu Shekhar
in Opinions
0

On Monday, in what can be called as yet another backlash for the ruling Telugu Desam Party in Andhra Pradesh, its Lok Sabha member from Amalapuram constituency in East Godavari district, Pandula Ravindra Babu quit the party and joined the main opposition, Yuvajana Sramika Rythu (YSR) Congress Party.

However, the disillusion of TDP leaders with the leadership of Chandrababu Naidu does not end here. Last week, a TDP MLA from Chirala, Amanchi Krishna Mohan decided to leave the TDP and joined the Jaganmohan Reddy-led party. 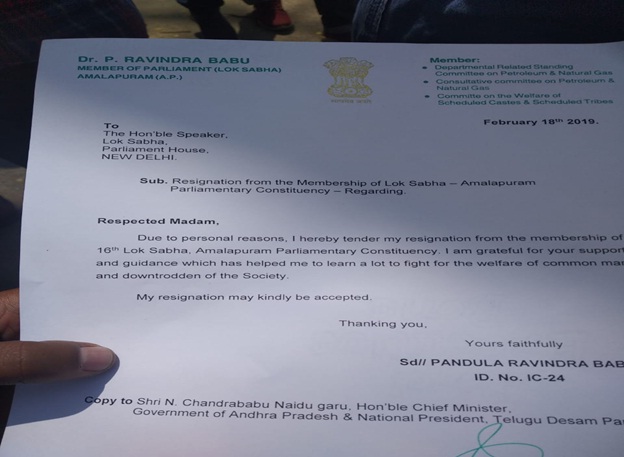 After the grand failure of the Mahakutami, Andhra Pradesh CM and TDP Chief Chandrababu Naidu is trying his best to keep himself relevant in both the national and state politics. Over the last few months, he has been conducting meetings with the leaders of various regional and national parties, seeking their support in his bid to form an anti-BJP coalition. He enthusiastically brought the motion of no confidence in the parliament against the Modi government and has been on a spree of mindless tirades against the same.

Naidu, in his attempt to stay politically relevant and to keep BJP away, earlier hinted about forming an alliance with arch-rival YSR Congress chief Jaganmohan Reddy. Speaking to News18, Naidu had said, “If at all he (Reddy) wins any seats, let him come and support us, nothing wrong in it.”

Ravindra Babu, former Central Services Officer, was elected to the Lok Sabha for the first time in 2014 on TDP’s ticket. However, Naidu’s attitude of sidelining the people of Andhra and his hunger for power disenchanted Amalapuram MP and he decided to join YSRC. “I am happy to have joined the YSRC. It is like homecoming for me,” added Babu after meeting Reddy.

He further took a jibe at Chief Minister N Chandrababu Naidu for ditching the people of Andhra in the name of a special economic package after several flip-flops on special category status. “The state will not prosper as long as Chandrababu Naidu remains the CM,” he added.

According to an opinion poll by Republic TV-CVoter in December, the YSRCP could win 14 out of the 25 seats in Andhra Pradesh, and the remaining seats may go to the Congress-TDP alliance. As per the survey, YSRCP will get a vote share of 41.6 percent while the TDP-Congress alliance would be able to bag 38.2 percent of the vote share only.

With elections round the corner, the decision by Pandula Ravindra Babu to leave the party comes as a major jolt to the TDP. Moreover, Andhraites also want to get rid of the false promises and outdated drama of the TDP Chief.  It is only a matter of time until the public teaches him a stern lesson for his histrionics in the upcoming assembly elections of 2019.