As India starts projects to use its share of water in the Indus Water System, Pakistan has started a fundraising campaign which is being supported by judges from the Supreme Court of Pakistan. The crowd funding drive aims to raise 14 billion dollars to build two dams and install water reservoirs. As per the website of the apex court of Pakistan, 70 million dollars have been raised so far from Pakistanis living in rich western countries like the United States and the United Kingdom. However, some people in the country saw it as a departure of the judiciary from its role and interference in the role of the executive. Dam building is the not the responsibility of the judiciary, said Bilawal Bhutto-Zardari, chairman of the Pakistan People’s Party.

Water scarcity is one of the biggest issues of Pakistan with many organizations estimating water shortage in the country by 2025 if dams are not built. Pakistan’s Prime Minister himself urged the Pakistanis living in other countries to donate generously. He called upon the expatriate Pakistanis to take part in this ‘jihad’.

Water of about 140 million acre feet (MAF) flows to Pakistan from the three western rivers (Indus, Jhelum and Chenab) of Indus Water Basin. As perthe Indus Water Treaty, 1960 Pakistan is allowed to use almost 80 percent of the water from the three western rivers. India has full rights over three eastern flowing rivers (Sutlej, Beas, and Ravi) of the Indus river basin. However, over the years India has generously given uninterrupted flow of water from these rivers to Pakistan.

There is no scarcity of water flow. In fact, as much as 29 MAF of water flows to the sea because Pakistan does not have dams and reservoirs for the storage of water. The country needs to store 25 MAF for immunity from water scarcity but the Pakistani government does not have money to build dams and reservoirs. The money donations and crowd funding will not be enough to build the needed dams and reservoirs. “Its useless to say that dams will be built by contribution,” said Sardar Riaz Ahmed Khan, a former development secretary in Pakistan occupied Jammu and Kashmir. 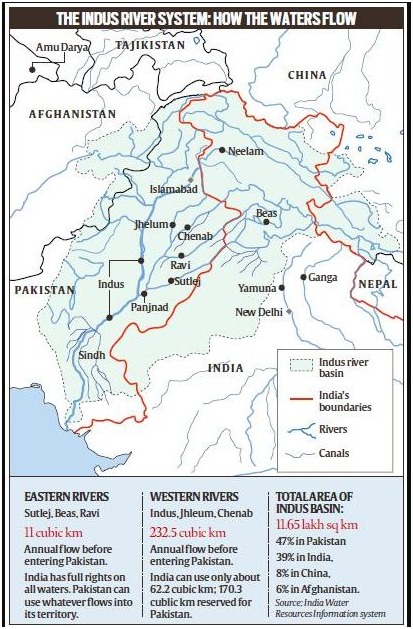 Recently, Union Minister for water resources, Nitin Gadkari has said that water from three Indian rivers will be used to nurture the Yamuna project.  India has been generous towards Pakistan for decades regarding the use of water of the Indus river system. But Pakistan’s ill-advised actions like the Pulwama attack have forced the Indian leadership to deal strictly with them.The projects include the construction of two dams- Ujh dam and Shahpur Kandi dam and the Sutlej-Beas link in Punjab.

After the Uri attacks, the government decided to use IWT as a weapon against Pakistan. The government is set to construct dams across the Indian part of the river and will make full use of its own share which Pakistan has been doing for long. The country is working on five ambitious hydroelectricity projects – Pakal Dul (1000 MW), Ratle (850 MW), Kishanganga (330 MW), Miyar (120 MW) and Lower Kalnai (48 MW). These are either to be built or planned in the Indus river basin in order to make full use of the Indus river basin. This will contribute in the socio-economic upliftment of the people of the region. Ujh dam, Shahpur Kandi dam and Sutlej-Beas link in Punjab are other projects by India to achieve its goals.