A picture of PM Modi on Tank has gone viral on social media yesterday. The mainstream media also used the image in most of the articles, the image is from Hazira near Surat in Gujarat where PM inaugurated an Armoured Systems Complex (ASC) of Larsen &Turbo (L&T). The newly built complex would manufacture K9 Vajra self-propelled Howitzer guns. Defense minister Nirmala Sithraman was also present at the inauguration event. L&T would manufacture self-propelled artillery Howitzers, future infantry combat vehicles (FICV), future-ready combat vehicles (FRCV) and main battle tanks in future at the ASC. 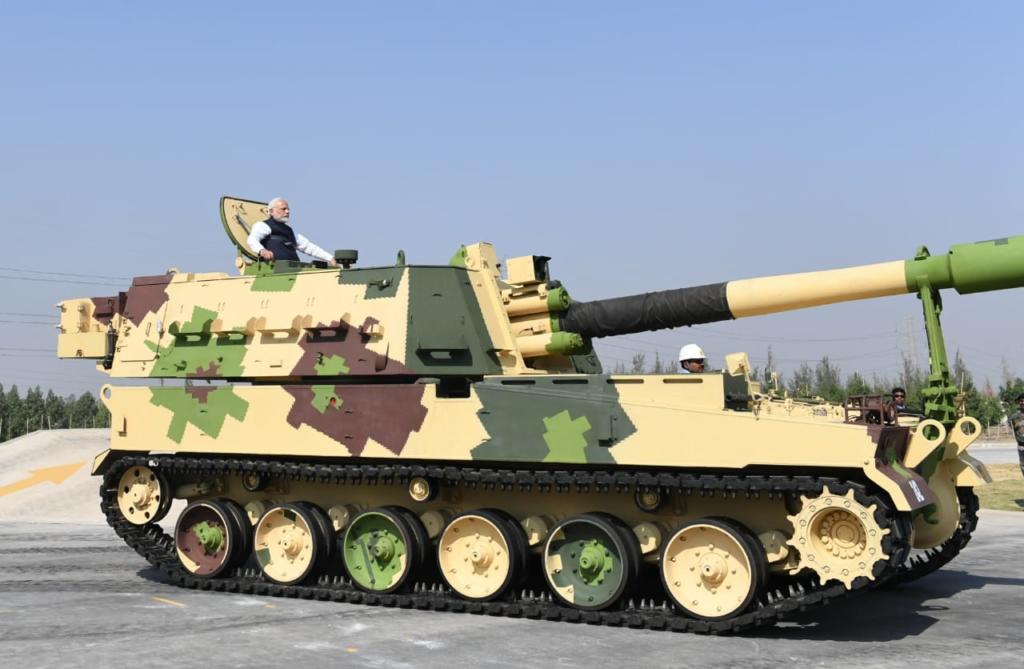 The company bagged 4,500 crore rupees contact from Defence ministry in 2017 to supply K9 Vajra-T 155 mm/52 calibre tracked self-propelled gun systems to India Army. This is the largest contract awarded to a private domestic defense company by the Ministry of Defence. 100 gun systems would be delivered in next 42 months by the L&T to India Army, the company bagged the deal under ‘Make in India’ initiative of Modi government. Under the initiative, the government will focus on manufacturing major defence equipment in the country rather than importing. “I congratulate the entire team of Larsen & Toubro for building the state-of-the-art K-9 Vajra Self Propelled Howitzer. This is a significant contribution towards India’s defence sector and protecting the country,” tweeted PM Modi.

Had the privilege of inaugurating the Larsen and Toubro Armoured Systems Complex in Hazira, Gujarat.

Boosting ‘Make in India’ in the defence sector is our endeavour. I am glad that the private sector too is supporting this pursuit and making a valuable contribution. pic.twitter.com/2zJynr5aCw

India’s L&T has major experience in the defence sector. Earlier the company used to make composite subsystems for the BrahMos and Akash missiles at the Advanced Composites Facility, Ranoli, Vadodara.

“L&T’s Hazira manufacturing complex was envisaged in the 1980s as the manufacturing hub for heavy equipment manufacturing projects catering to nuclear power, oil and gas, process plants and defence sectors. The world-class facility has been at the forefront of technology to meet various infrastructure, industrial and defence needs of the nation. The complex at Hazira adds another feather in the cap of L&T’s global manufacturing ecosystem and serves to build India’s defence requirements,” said A M Naik, Group Chairman of L&T.

L&T wants to build a fully indigenous battle tank for the armed forces of the country. “By involving 400 SMEs and developing 13,000 parts indigenously, the company is moving in the direction of manufacturing a totally indigenous battle tank without having to depend on external help,” said J D Patil, senior executive vice president, L&T Defence. “For now, we have to depend on external technology. Under the programme, we have partnered with South Korea’s largest defense company Hanwha. We had offered the programme to the government and Army tested the prototype for 3.5 years. After success of the testing, the order was placed,” he added.

The efforts of the Modi government to promote domestic manufacturing in defence sector have saved millions of dollars. The heavy defence equipment which were imported earlier are now being manufactured by public and private sector companies like DRDO, Reliance Defence in the nation itself. The Defence Procurement Policy of 2016 introduced ‘Indigenously Designed Developed & Manufactured’ provision (IDDM) to promote ‘Make in India’ in the sector. The ‘Make’ procedure is for both, the government-funded manufacturing and industry-funded manufacturing with provisions for MSME. The offset policy was also tweaked to allow easy transfer of technology and enhance domestic manufacturing. The draft of Defense Production Policy, 2018 aims to make India a manufacturing hub of defense equipment. The focus of DPP-2018 will be to invest adequate sources to develop critical technology for manufacturing state-of-the-art military equipment including fighter jets, attack helicopters etc.