by Akshay Narang
in Economy
0

In the recent past, the opposition has been particularly vocal about the allegation that the Modi government has not been able to generate enough jobs for the youth of the nation and that unemployment is going up rapidly. Congress president, Rahul Gandhi has been particularly vocal about the claim that joblessness has become a major issue during the tenure of Modi government. On October 2 last year, Rahul Gandhi claimed, “Modi made a false promise to you. He cannot give you employment. But we will work 24 hours a day to give you employment. We will waive your loans too. We have done it in 2009; we can do it again.” Rahul Gandhi has been trying to corner the Modi government on this issue time and again.

However, the opposition propaganda now stands totally negated even as the “Naukri Hiring Outlook 2019” report gives a rather encouraging picture of employment opportunities in India. The report has been released by naukri.com which happens to be the top job website. The report gives an overview of the results of its biannual survey, ‘Naukri Hiring Outlook 2019’. 3310 employers from across the country participated in the survey. 84 percent of the surveyed recruiters are said to be anticipating an increased hiring activity which observes a 20% increase in comparison to last year (July – Dec 2018). When it comes to the first half of the year, growth coming from new job creation and replacement hiring combined are being anticipated by 56% of the recruiters whereas 12% of the recruiters surveyed said only replacement hiring will take place. 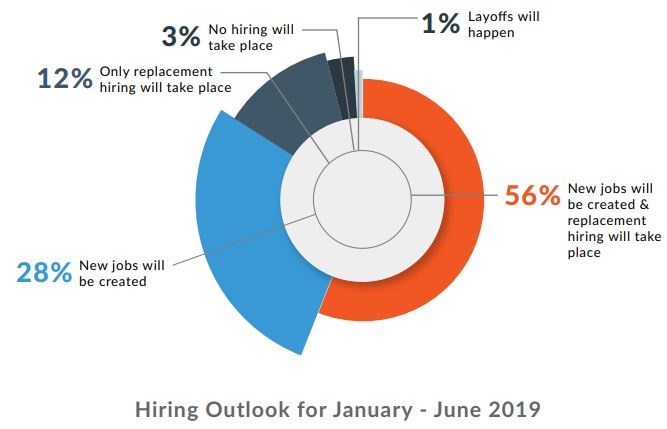 Half of the recruiters who were surveyed said Hiring activities are expected to be the highest in Sales & Marketing followed by the IT-Software functional areas. According to one-fourth of the surveyed recruiters, there will also be considerable hiring in Operations, HR and Accounts domains. Coming to experience levels, the survey revealed that maximum hiring could take place in the 3-5 years’ experience band followed by the 1-3 years’ band. What further reflects upon the optimism created when it comes to recruitment is a sharp decline in the layoff numbers with only 1% of the total surveyed recruiters anticipating layoffs. 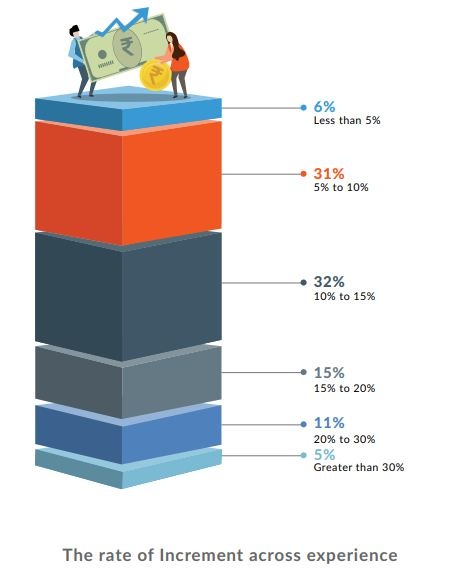 Sumeet Singh, Chief Marketing Officer, InfoEdge India Ltd., said, “The Hiring Outlook highlights positive hiring sentiment among the recruiter community with both replacement hiring and new jobs creation taking place simultaneously in the first half of the year. Key industries have continued to show growth. The same has been demonstrated by the Naukri JobSpeak. The momentum gained for recruitment is likely to continue into the new year.” 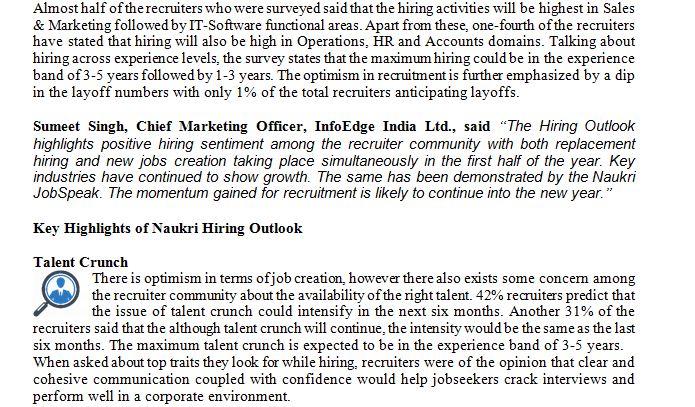 From this survey, it has become clear that the entire propaganda of opposition concerning the lack of employment opportunities in India is a mere figment of the imagination. The survey results also corroborate PM Modi’s claims that sufficient employment opportunities are being generated in the country. Last year when the opposition had brought the no-confidence motion, PM Modi had outrightly rejected the criticism that the government had failed to create enough jobs. At that time, the prime minister had said that over one crore jobs had been created in the country over the last one year. Now, the results of the present survey corroborate the fact that India is generating enough jobs to make full use of its demographic dividend. The opposition in general and the Congress in particular, have misled the country and its youth about the employment opportunities in the country. Now, that they have been exposed by the Naukri Hiring Outlook report, they will in all probability face the music when the country goes to polls in near future.