Migrant workers, a boon to host states in Inter-State migration

Migration has defined India for centuries. After Independence, when the socialist policies presented little opportunity to the people of the country, the population started migrating to foreign land. Today, Indian Diaspora is the second largest in the world with an estimate ranging from 30 million to 60 million. The Chinese though constitute the largest Diaspora on earth, do not receive the amount of remittances India receives because Indians are financially very successful overseas. Even in the ancient times, the people from peninsular India had their impact on Southeast Asia in a positive manner. The cultural influence of the states of Odisha, Tamil Nadu, Kerala, Gujarat and other coastal states is still visible overseas. Crossing borders of India defined ‘migration’ in the country for decades, the area which remained unfocused remains the inter-state migration.

The economic liberalization of 1990s presented the states with the opportunity to grow at their own pace. Economic growth is unequal in most of the cases due to various reasons including geography, government, culture, and quality of human capital. Therefore, some states and regions clearly out shined others in terms of economic growth and opportunities. Inter-state migration started at large scale since 2000s. The growth in migration also increased ethnic tension between local population and migrants moving from different parts of the country. People from states like Uttar Pradesh, Bihar, Odisha are especially targeted due to cheap labor, they provide to factories and households. The poor local population resent the fact that migrant population helps in keeping the price of labor low which ultimately hurts them. There are many other problems like cultural differences, caste and class tensions soon and so forth.

These differences have led many violent protests by local population. Recently, migrant workers of north Indian states are being targeted leading the exodus of factory workers from the state of Gujarat. The similar trend was visible in Maharashtra in 2008 after workers of Maharashtra Navnirman Sena (MNS) attacked north Indians. The leaders like Alpesh Thakor and Raj Thackeray exploit the vulnerability of migrant workers to score political points. This trend is not only noticeable in north and west India but the migrants to southern states also face the similar problems. The Odia migrants are disliked by some sections of Tamilian population, Biharis by some sections of Keralites soon and so forth. However, the constitution of India gives complete freedom to people from any part of the union to migrate anywhere in the country. Therefore, unscrupulous leaders like Alpesh Thakor and Raj Thackeray are likely to be punished by the law enforcement agencies if there is a strong and decisive government. The main problem lies in providing welfare benefits to poor migrant laborers. 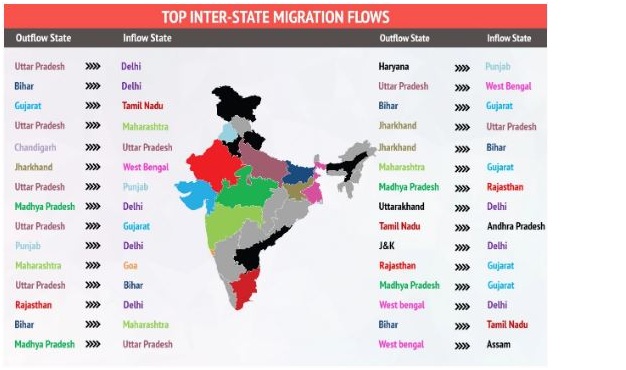 Krishnavatar Sharma, Co-founder and director, Aajeevika Bureau wrote a report for World Economic Forum which claims “seasonal migrants dominate the low-paying, hazardous and informal market jobs in key sectors such as construction, hotel, textile, manufacturing, transportation, services, domestic work etc. They lack access to better health services, which results in very poor occupational health. Since they cannot afford private hospitals, they often go back to their villages once they fall sick. This affects their employment opportunities, as well as the loss of wages.” The scale of people and problem is so huge that work of an NGO will not make any substantial difference to the living conditions of people. Policy level interference by machinery of state is required to solve the problem faced by migrant workers.

The government appointed a panel led by Partho Mukhopadhyay from the Centre for Policy Research. It suggested that workers lose social welfare benefits on intra-state and inter-state migration. Therefore, adding portability to social welfare benefits is most important to improve the living condition of migrant workers. The Economic Survey recommended ‘an inter-state self registration process’ as migrant welfare requires ‘inter-state coordination of fiscal costs of migration. The report by government-appointed panel states “the first step to ensuring universal access under the Food Security Act is to allow portability of PDS benefits within the state followed by agreements between states so as to guarantee portability for inter-state migrants.” The inclusion of migrant workers in Sarva Shiksha Abhiyan plan and portable universal healthcare for workers in organized sector was also suggested. Most of the migrant workers will be covered under Modicare scheme which identifies beneficiaries on basis of SECC, 2011 and is not registrations based. The Panel suggests the government to make further efforts to avail facilities to migrant workers. The states also need to ensure that there are no restrictions to employment and skill development of the migrant workers.