As per the Tax experts, there are four major reasons behind exponential rise of tax to GDP ratio. “Effect of demonetization, proper use of digitally collected information by the tax department, fewer cases of scrutiny, and ease of refunds may be the top four reasons from higher tax collections,” said SP Singh, Partner at Deloitte India. As per the Income Tax data, corporate tax collection registered a 55 percent jump while individual tax collection witnessed 26 percent rise in the last three financial years. Corporate tax collection rose from Rs 32.28 lakh crore to Rs 49.95 lakh and individual tax jumped to Rs 58,576 lakh crore from the previous Rs 46,377 lakh crore. 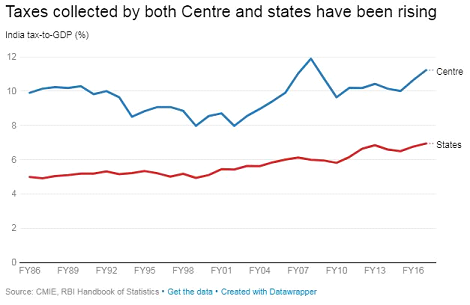 Tax to GDP ratio has grown at a steady pace but the country still lags behind BRICS and ASEAN countries in this respect. Sanjay Kumar, Senior Director, Deloitte India said that “Indonesia, for example, has 11.8% tax collection to GDP ratio. On the widening of the taxpayer base, we are still below a general estimate that taxpayers’ base should be about 10 crore.” India has the lowest Tax to GDP ratio among BRICS countries. As we can see from the data given above, most developing countries have a low ‘tax to GDP ratio’. In order to move from a developing nation to a developed one, a nation must increase its citizens’ tax compliance. Ever since the Modi led government came to power in 2014, it has taken one step after another for the promised crackdown on black money. Demonetization, coupled with the Real Estate (Regulation and Development) Act and the Goods and Services Tax bill, has been an integral part of this initiative. The cumulative impact of the structural changes coupled with an integrated environment proved more effective in the crackdown on black money. In isolation, the bills were not as effective as they are, after all the above enactments have come into force. Therefore, a fair evaluation of the impact of these steps can only be done in a post-GST environment to determine the efficacy of the policies. 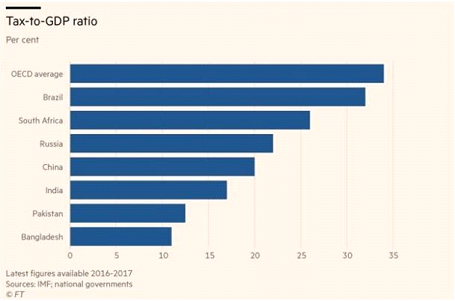 If Tax to GDP ratio is low, a country cannot afford basic amenities like health and education for its citizens. Universal access to these primary needs is required to build human capital and improve the standard of living. India has recently introduced Universal Healthcare through the National Health Protection Scheme (Popularly known as “Modicare”). The increased ‘tax to GDP ratio’ means that more money goes directly into government coffers and ultimately percolates down to citizens of our country. This money would go a long way in making India a welfare state, the kind that Deen Dayal Upadhyay had envisioned.