Facebook has boondoggled user preference for videos, for more than four years now. The social media giant did so to get more expensive ads from advertisers. Facebook is not alone is the game of inflating user preference for videos, Snapchat and Twitter did the same. However, social media users still prioritize text over videos. “Overall, our study shows that online news video consumption is growing in many countries, but more slowly than some in the industry had hoped or predicted,” wrote Antonis Kalogeropoulos of the Reuters Institute for the Study of Journalism at Oxford University in 2017 in a research paper. The paper looked for growth in video consumption between 2014 and 2016 and found that medium is growing but not at the pace splashed by social media organizations. 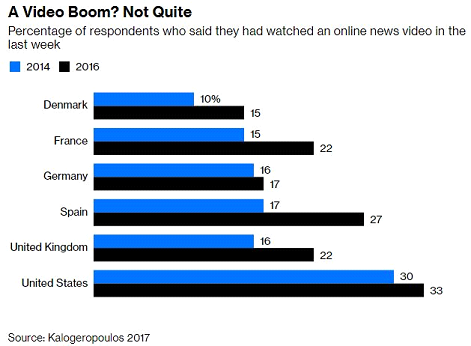 An average social media user in developed countries still prefers text over video. The social media giants misled the news publishers about the video appetite of the masses, which resulted in heavy investment by publishing companies in video production. The growth in video consumption was primarily driven by “the power of social media platforms to push online news video in their algorithms to make them more prominent,” wrote Kalogeropoulos. The push for video content came from the growing hunger of social media companies for advertisement revenues. The most important source of income for companies like Facebook, Twitter, and Snapchat is the advertisement they show in form of videos, texts and graphics. 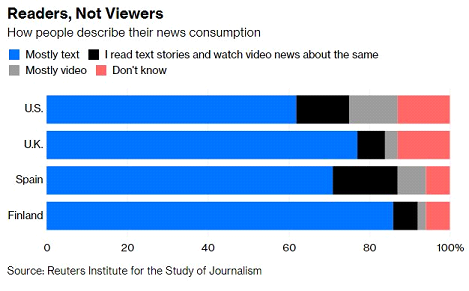 Over the past few years, Facebook has repeatedly modified its algorithm to push for video content despite low demand from consumers. According to researches video is less efficient way of getting information, one can typically take in 150 to 160 spoken words a minute, but the average reading speed is about 230 words per minute. In recent years, Facebook has gone ‘rogue’ in compromising with user preference and data. In addition to forging user preference and pushing its own will to make the company profitable, the social media giant also sold private user data to political consultancies without the consent of their users. Data security has been major problem with Facebook in recent months. The issue is with revenue model of Facebook, selling user’s private data is the major source of revenue for the company as it helps companies target their niche audience. The social media giant accepted that it sold user data to four Chinese companies including Honour and Huawei.

Recently, Facebook released a statement that personal data of more than 14 million (1.4 crore) people has become public between the period of 18th May to 27th May. Before that the company found itself in the middle of Cambridge Analytica data scandal. The scandal was first major case where pubic came to know that their private data on Facebook is being used by companies without their consent. The private user data is used for political advertisement targeting and consumer targeting by data analytics companies like Cambridge Analytica. Facebook CEO, Zukerberg had to testify before US Congress in data breach scandal. Many public fund shareholders of Facebook backed the proposal to remove CEO Mark Zuckerberg from chairman position over the issue of ‘multiple cases of data breach’. The stock prices of Facebook have moved southward, in the month of July at one point of time the company lost almost 150 billion dollars of market capitalization in a day. The issue of data breach became more important due to politicization of social media platforms. The conservative pages have accused Facebook for ‘shadow banning’ of non-liberal content.

Is the international community done with Saudi Arabia

The importance of being Ajit Jogi

Roses on the outside, thorns on the inside – What’s really cooking between PM Modi and Trump

Raj Thackeray vs Sharad Pawar in Pune: The new Hindutva icon is challenging the wily old fox in his turf

“Bharat Mata ki jai is creating a militant India,” Manmohan Singh shows why he is Sonia’s most loyal companion