In India, tax evasion and money laundering used to be as normal as doing business. The atmosphere prevailing was of ‘Matsya Nyaya’ where big fish eats small fish because justice was not delivered in a time constraint and sometimes not delivered at all. Rule of law is not for the rich and powerful, they could cheat the government and the system by using money and political connections. However, the atmosphere is changing slowly. The humor about ‘rule of law’ is diminishing because government has decided to punish the guilty and reward the people who conduct business as per the rule of law.

Two most important decisions taken to establish ‘rule of law’ was implementation of Insolvency and Bankruptcy Code (IBC) and crackdown on ‘shell companies’. Business people like Vijay Mallya, Nirav Modi used to get loans from public sector banks but they had no intention of paying it back. Honest taxpayers had to pay for the lavish lifestyle of people like Vijay Mallya because banks get recapitalized through tax money. The IBC code made sure that companies could be dissolved if they are not able to pay back loans and promoters will not even get a chance to bid for their own companies once the case goes to the National Company Law Tribunal (NCLT) through IBC process. 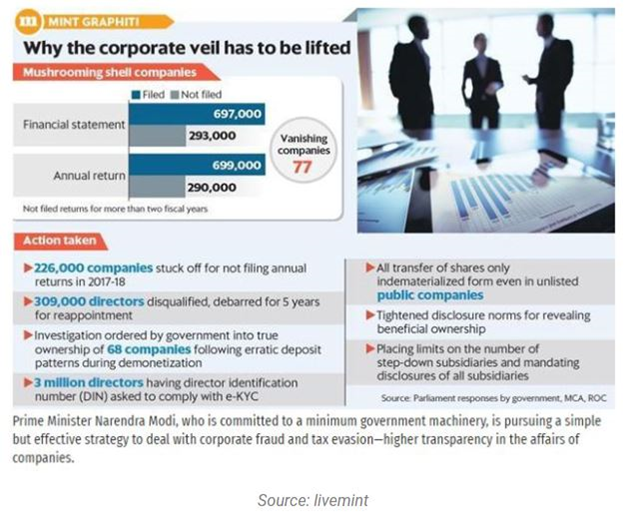 The next step to establish rule of law and stop tax evasion was crackdown on shell companies. These companies were opened only with the intention of money laundering and tax evasion with no independent business of their own. Shell companies were used for almost every big corporate fraud.  In the case of Nirav Modi’s fraud, almost 150 shell companies were identified. The shell companies in the Nirav Modi scam were registered in the name of his family members. The Nirav Modi scam cost billions of dollars to the Indian public sector banks with PNB alone losing $1.77 billion. At present, the Modi government is probing deposits of almost 1 billion dollars in 20,000 such companies, indicating that the shadow economy of India runs deep, accounting for almost 25 percent of GDP.

The government had deregistered 55,000 shell firms in second phase of crackdown. 2.26 lakh shell firms were already deregistered in the last financial year and 3.09 lakh directors were disqualified in the first phase of the drive. “So far as the shell companies are concerned, in the first phase, we have struck off around 2.26 lakh companies, which were not only non-compliant firms but also most of them were bogus. More than 400 companies were working from a one-room set up. In the second phase, we have already struck off around 55,000 companies and more are on the anvil,” said minister of corporate affairs PP Chaudhary. In June, government has said that it has identified 2.25 lakh companies and 7,191 limited liability partnerships (LLPs) on the basis that they did not filed financial statements in the last two years.

Government is using various means to take on shell companies. The government and Reserve Bank of India (RBI) have started discussions about making a database of all electronic payment transactions. This will help in establishing a money trail to probe money laundering cases and operations of shell companies. While the government’s main focus will be on probing the corporate transactions, it will also have data of individual transactions. In the upcoming months, many companies have to Geo-tag their registered offices in the statutory filings with the Registrar of Companies (RoC). And this will allow investigation agencies to notice shell companies in case too many offices are registered at the same address.

John Abraham’s latest movie will be about Batla House encounter