According to a public notice issued in the leading dailies of the country, the Hindi channel of New Delhi Television Limited, popularly known as NDTV India, is all set to become a paid channel from the midnight of 15th September 2018. The darling of leftist cabal and liberal intelligentsia in the country, NDTV India has for long been suffering from a decline in viewership. NDTV had earlier posted consolidated net loss at Rs 23.14 crore for the quarter ended September 30, 2017 while it had also suffered net loss of Rs 22.91 crore in the same corresponding quarter a year ago. The company faced with dwindling viewership which has resulted in apathy from the advertisers is trying hard to stay afloat. The bid to convert a free to air channel into a paid one too is driven by the motive to make some profits or at least break even which the channel has failed to do in the last many years. 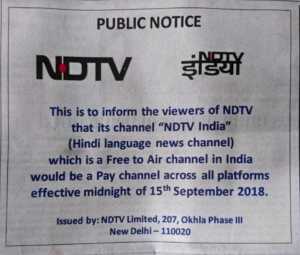 Both the viewership and the profits for NDTV have been dwindling for the past many years. It had sold 7.38% of its stakes in its subsidiary, Red Pixels Ventures, to A R Chadha and Co. to save itself from the deepening financial crisis in May earlier this year. The sale had been done reportedly to meet its working capital requirements and for payment of outstanding rent. A workforce reduction by almost 25% by the NDTV too had made the headlines back in 2017 under a restructuring strategy. NDTV 24×7 slipped to the fifth spot as far English news channels are concerned last year itself. This became visible in terms of financial losses also.

The major difference between a free to air channel and a subscription based channel are the sources of revenues it relies upon. While a free to air channel is dependent on licensing fees and advertising income for its revenues a subscription based channel has to remain content with the onetime subscription fees. NDTV India has received the cold shoulder from advertisers and public owing to the type of content it pushes around. Advertisers seek out and prefer channels which have a wide pool of audience so that they can push their products to the intended target audience. NDTV’s stance and style of reporting on almost any incident has frustrated a large segment of the Indian audience across age and culture, audience who have since switched to other TV channels and websites for their daily quota of news, leaving Prannoy and Radhika Roy no other option but to opt for a subscription based model.

Switching to a subscription based model is a last ditched attempt by the owners to stay afloat financially, but it is more than likely to fall flat considering the type of content which NDTV India offers. Paid channels work because they usually have some exclusive content on offer, a cricket series in India, some exclusive television shows would work in the country but it is highly unlikely that a news channel will get satisfactory subscriptions. There are hardly a few stories which remain exclusive in the highly competitive world of journalism today; people become loyal to one news channel when they agree with the opinions being pushed around by the news channel. News is readily available for free and with most people disagreeing with the opinions put forth by NDTV it is highly unlikely that people will opt for the subscriptions in huge numbers. The company which is already facing massive losses is soon going to face even more dire issues when it tries to placate its shareholders in the board meetings.

Income Tax data released, some states clearly outshine the others