Income Tax data released, some states clearly outshine the others

The recently released Income Tax data presents some very exciting facts before us. People from the states of Maharashtra and Delhi together pay 53 percent of country’s total income tax. The income tax data was released for the first time in the country’s history after the repeated calls by many economists.  The previous governments despite all their lip service about greater transparency for data did not release the Income Tax (IT) collection data since the IT laws were implemented in 1961. The opposition repeatedly accuses the government of fudging the GDP numbers and non-transparency in Central Statistical Organization (CSO). Although the fact remains that they were running the country like a nanny state and ignoring the citizen’s rights to know the government’s facts and data.

Modi government’s release of Income Tax data to the public raises some interesting questions which could be used in the course correction of public policies. The state of Uttar Pradesh with 16.50 percent of country’s population contributes only 4 percent in the total IT collection. Maharashtra with 9.28 percent of the population contributes 39.9 percent of total IT collection. The grave inequalities are due to various reasons which include some states being richer and others being poor. Rich people continue to in live in cities like Mumbai and Delhi due to a good quality of life in these cities offer and head office locations. Industrialization of some states while many still dependent on agriculture results in high per capita income differences in the country and this is the reason behind this disproportionate ratio.  Delhi with a tiny 1.39 percent of the nation’s population contributes to 13 percent of total Income tax collection. 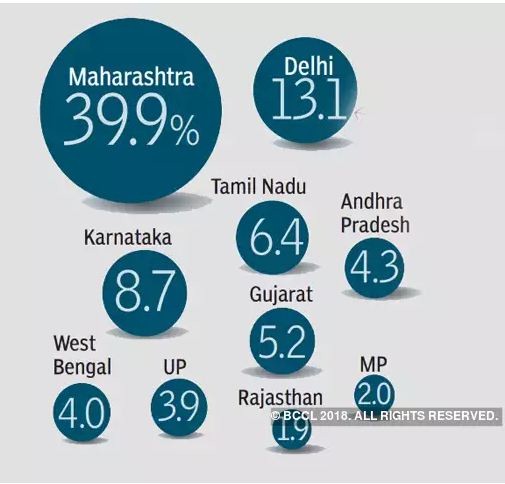 The income tax share of other states with large populations is at a dismal rate. Bihar constitutes for 8.60 percent of total population of India, but it is not even in top 10 of highest income tax paying states.

The state of West Bengal which was an economic powerhouse at the time independence with Kolkata as its hub contributes to just 4 percent of total income tax collections. In initial days of Income tax implementation in the 1960s the tax collection from the state was ‘probably’ the highest but now languishes among the bottom few.

The IT department never tried to make tax collections more democratic under the previous governments. The income tax collections were limited to metropolitan and big cities and this is the reason behind states with large metropolis like Maharashtra, Tamil Nadu, Karnataka’s excellent share in income taxes. In many districts, the IT department does even have an office to look after the collection and feedbacks. To make the collections more democratic the government must build IT department offices in every district with a sizeable population. Modi government tried to democratize the income tax collection with its drive against black money. The steps of demonetization, crackdown on shell companies and Benami property act have made the evaders fearful. This resulted in the increase in the number of direct taxpayers from 6 million to 10 million in four years of Modi government.

Has AAP finally seen the writing on the wall?