After Raudra Hanuman, Artist Karan Acharya is back with stoic Shri Ram

by Abhishek Bhardwaj
in Culture
0

Mangalore based vector artist Karan Acharya whose ‘Raudra (Angry) Hanuman’ poster created ripples across India, is back with another vector art. This time it’s Prabhu Shri Ram himself.

His new artwork, stoic Bhagwan Ram as he calls it is now popular in the social media circles ever since it was unveiled by him. The ‘angry Hanuman’ artwork became a viral phenomenon, finding its way on to t-shirts, car windshields and Facebook profile pictures. The portrayal of Hanuman in Rudra form was quite unique as compared to the previous depictions of the widely revered deity. Even PM Modi mentioned and praised Karan Acharya for his art by terming it as the “pride of Mangaluru” and had slammed the Congress party ecosystem for attacking Karan and his artwork. All this took place while the campaign for the Karnataka state elections was in full swing.

Karan Acharya, the artist runs a company Paridhi Media Works with his wife Pooja, brother in law Gurudeep and friend Havish. Speaking about the idea of stoic Shri Ram, Karan Acharya had earlier said, “The art on Shri Ram was ready a month ago and I have an idea of launching T-shirts with the image on it.”

His t-shirt was launched on Thursday in Bengaluru and it became quite the rage in the city too, this was followed by another series of social media frenzy. “We launched the T-shirts with vector art on Shri Ram online in Bengaluru on Thursday. I had uploaded the image only to wish people who observe ‘Ramyana masa’. I never expected such a huge response,” Karan said. He went on to explain the reason behind the expression which Bhagwan Ram has in his vector avatar, according to Karan, “The Ram that I created has a stoic expression, which reflects the moment when he was about to kill Ravana.”

Take a look at the art work: 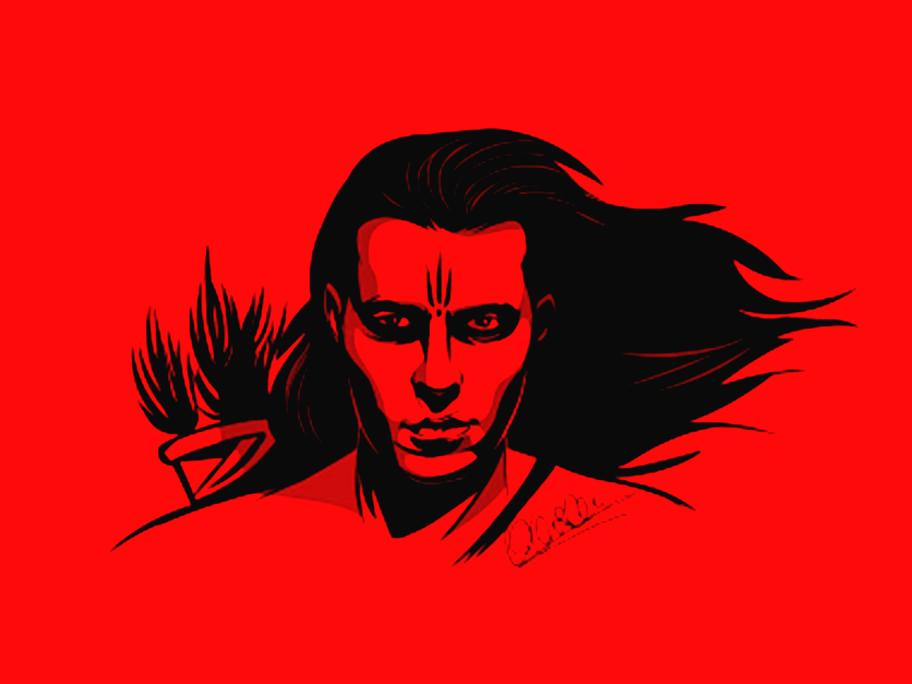 Sage Valmiki describes the scene in the following two Shlokas in the Yuddha Kand of Ramayan:

That enraged Rama, stretching his bow well and with an attentive mind, hurled that arrow which can tear off the vitals, towards Ravana.

That arrow, which was inviolable as a thunderbolt hurled by the arms of Indra and irresistible as Yama the lord of Death, fell upon Ravana’s chest.

Needless to say that the determined look on Shri Ram’s gentle visage, his flowing hair, and the focused eyes perfectly depict the war readiness of Shri Ram as he sets his mind on killing the demon king of Lanka, a deed for which he was born as the 7th incarnation of Bhagwan Vishnu.

Karan went on to add how he had no motives of making profit in mind when he launched the angry Hanuman art piece but also mentioned that some companies went on to make profits by selling the artwork created by him without his permission or even attribution. This time though he wants to change this scenario and wants companies to take his permission and give away a part of the royalty for selling his artwork. More importantly he is hopeful that the companies will willingly come up to him in order to ensure better business in the future.

Talking about his future plans Karan went on to add that he has plans to work on a Maa Sita vector artwork next. “People have been tweeting me to work on Bhagwan Narasimha and Bhagat Singh, but I have Sita from Ramyana in mind, which I want to create with an emphasis on women power,” he said.

For a generation obsessed with Instagram and Musically, Karan Acharya stands out as a mascot of sanity. Adding a touch of cool is a great way to bring the deracinated Hindus and teens and millennials back to the fore of Dharma . It won’t be unwise to say that the transition from Superman to Hanuman has been smooth and a well received one at that. Hope Bhagwan Shri Ram artwork is a roaring success as well!

After boasting about Kerala’s healthcare, CM Pinarayi Vijayan will go to US for treatment