In yet another jolt for the Congress as the Karnataka elections loom around the corner, it has become clear that the JD(S) is not going to join its forces with the Congress. This is a telling blow for the Congress which seems to be putting a futile struggle to retain power.

A furious Deve Gowda appeared to have taken objection to the casual and insulting statements made by Rahul Gandhi. He also took a dig at Sonia Gandhi and called out her act of betrayal when she withdrew support during Deve Gowda’s Prime Ministerial term. In fact, Deve Gowda has made it clear that there is no question of coming into an alliance with the Congress and he would be happier in sitting on the opposition benches. The Congress is on a serial blunder spree, from having released irresponsible statements against Yogi Adityanath, to calling PM Modi a “northern import”. 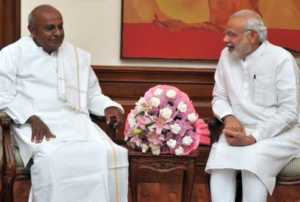 Deve Gowda tried to downplay the praise by PM Modi but could not hide his aversion to the Congress and a softer view towards the BJP. He made it clear that whatever PM Modi said was sufficient. He  recalled how he had taken the vow of giving up on politics if Modi came to power. However, when he went to submit his resignation, PM Modi forgot all political differences and made it clear that ‘whatever one may say during political campaigns out of a heated atmosphere should not be taken that seriously‘. Having taken this moment to remember the friendly gesture extended by PM Modi, Deve Gowda is giving hints and making it further clear that there is no possibility of even a post-poll JD(S)-Congress alliance in Karnataka.