For Bollywood, the media and these trolls particularly, little Geeta’s rape is fair game.

Case 1: A girl is abducted, tortured, allegedly raped and brutally murdered in Kathua, near Jammu.  Before digging deep into the narrative, articles shamelessly defaming the Sanatani community, and absurd trends of ‘Rapistan’, ‘Religion of Rape’, ‘#IAmHindustan’, involving some elite and not so famous artistes were trended. The concerted campaign to defame (justice was never the priority) bore partial success when even the heads of international organizations like IMF had to speak on the issue.

Case 2: Geeta (name changed) is lured by a teenager to a Madarsa in Sahibabad, where she is held captive for days, and brutally gangraped by the teenager and the cleric teaching in the Madarsa. It is only after the parents file a complaint that the police manage to trace and rescue the girl. As of now, the teenager and the 34 year old cleric have been arrested and put behind bars.

Except for a social media trend (#JusticeForGeeta), nobody, mind you, nobody said a word on this issue. From the intelligentsia to the PR hungry Bollywood elite, a deathly silence was maintained on this issue. Only a few right wingers, coupled by some sane voices on Twitter, are continuously keeping the flag of #JusticeForGeeta aloft. As expected, the placard gang, who would switch to ‘Sparta’ mode on cases like Kathua, refused to comment either on this or on the blatant defense of the atrocious ‘casting couch’.

However, what added salt to the wounds was a series of tweets which in the name of #JusticeforGeeta, advocated a bizarre suggestion: Geeta was allegedly in love with the juvenile rapist and wants to marry him. The request of these online abusers (trolls in intellectual lingo): Marry Geeta off to the rapist. Marry off an 11 year old girl to a 17 year old rape accused?? If you don’t believe it, see the following screenshots: 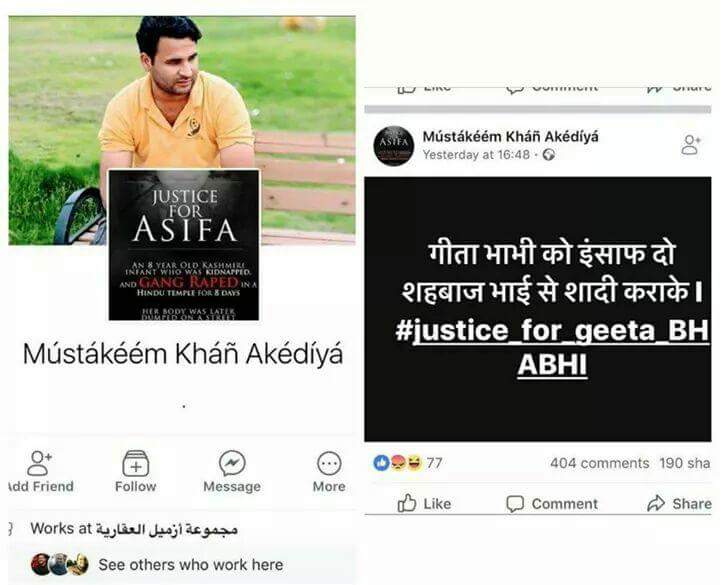 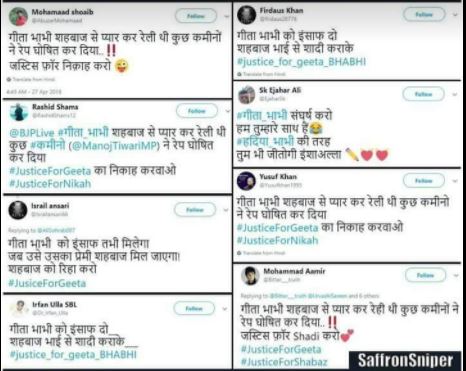 Notice the irony. Only a couple of weeks , when the entire nation was in turmoil owing to the Kathua case, some diligent users dug into the narrative being peddled and demanded a fair trial, along with a CBI enquiry. Such people were named and shamed as ‘rape supporters’ and ‘rape apologists’ by the very same gang which allegedly fought for the justice of the victim, while throwing away ethics to the wind by revealing the name of the victim as well.

Not only that, some found this incident as a tool to peddle their horrible agenda, as this tweet from an NSUI (Congress Party’s student union) leader reflects: 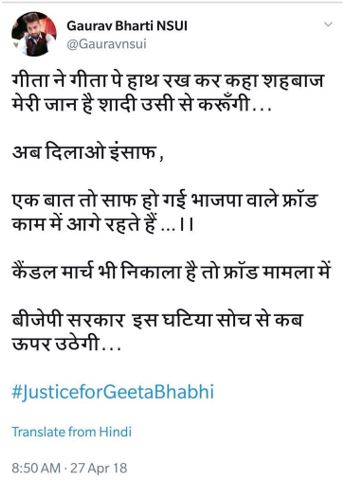 However, when the ‘peaceful’ trolls, mostly hailing from the community that must not be named, called for marrying off Geeta to the juvenile rapist, not one of these persons protested against this macabre call. So according to this logic, anybody who calls for a fair trial in the Kathua case is a ‘rapist and rape supporter’, while calling for a rape victim’s marriage to a rapist is maintaining the Ganga Jamuni Tehzeeb? Nothing could be more hypocritical than this. Now I understand why Rajput women were compelled to commit ‘Jauhar’ in the past.