by Mayura Rao
in Trending
0

As the Karnataka assembly elections approach, Siddaramaiah’s Congress which has still not recovered from the Nalapad saga, is once again in the news for all the wrong reasons. Veerappa Moily, an ex chief minister and a veteran Congress Party leader who is currently the chairman of the party’s manifesto committee, tweeted: “INC needs to solve money in politics. We can’t afford to have road contractors and their nexus with the state PWD minister determine how candidates are selected for the upcoming assembly elections.”

Immediately after this tweet, his son Harsha Moily too retweeted the same. The tweets were later deleted and the veteran leader now says that he does not know how it happened, although he hasn’t  filed any complaint about his account being hacked.

The Congress Party spokesperson Dinesh Gundu Rao has expressed on Twitter that although Mr. Moily has retracted his statement, it was an unfortunate comment on the PWD minister Mahadevappa’s good work in Karnataka’s road infrastructure construction.

The tweet by  Dinesh Gundu Rao indicates that Mr. Moily’s tweet was no mistake. It comes across as a clear sign of the ongoing infighting in the state unit of the Congress Party prior to the upcoming elections. Many believe that the infighting is related to candidate selection for some seats. 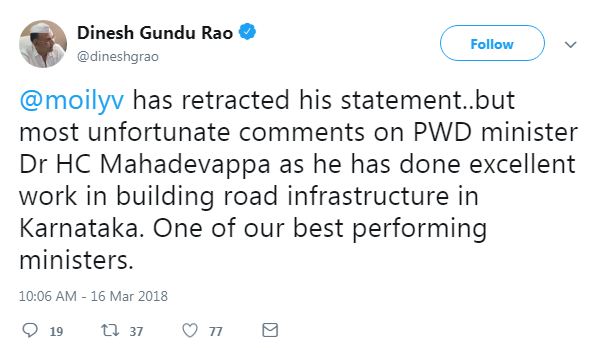 Mahadevappa’s name had earlier appeared in the infamous diary that was recovered from MLC Govind Raju’s house by IT officials, an incident which had sent shock-waves in the country since it allegedly contained information about kickbacks to the party’s leadership in Delhi. Mahadevappa is a close aid of Siddaramaiah. Allegations have cropped up against his son for his links with the sand mafia, and ironically, it is his son who chairs the Government Vigilance Committee that looks into the implementation of housing schemes. Speculation is rife about  a rift  between Mahadevappa and Moily, as the former allegedly denied a ticket to Moily’s son Harsha, which has not gone down well with the Congress veteran.

The BJP has hit out at the Congress Party over this issue. The famous  handle of the Karnataka unit of BJP had this to say about the controversy: 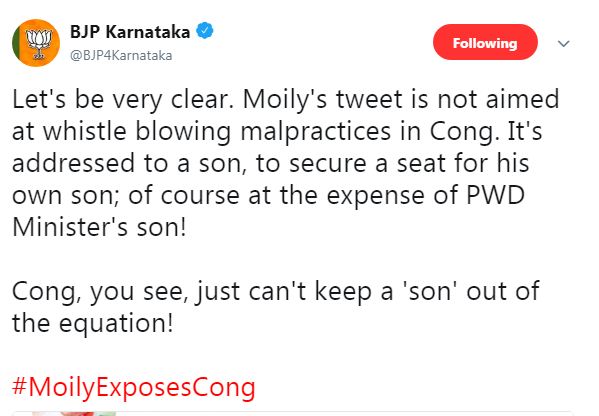 But the fact that a senior leader like Moily had to resort to Twitter to express that the Congress Party has to sort out corrupt practices is a worrying new low in an already decadent culture under the reign of Siddaramaiah. And that a veteran leader in Congress Party had to delete his tweet and claim he did not know how the tweet went out of his handle speaks volumes about how free can fair the functioning of the party is under a high command culture.

Whether this infighting in the Congress Party is symptomatic of a sinking ship remains to be seen. Clearly, this is a party that is struggling to stay afloat, even in those parts of the country that it governs. It seems to have lost its act completed.  Many believe this national party will soon lose the only big state it holds.

At 5’4”, Yogi Adityanath is a billion hopes tall

Mayura Rao is a Freelance Creative Writer and a passionate blogger, a travel freak and humor buff who believes in vehemently voicing out the hypocrisy prevalent around us.