EDIT: THIS IS WHAT THE NEWSPAPERS SAY ABOUT YOGI ADITYANATH’S PERFORMANCE IN TRIPURA. 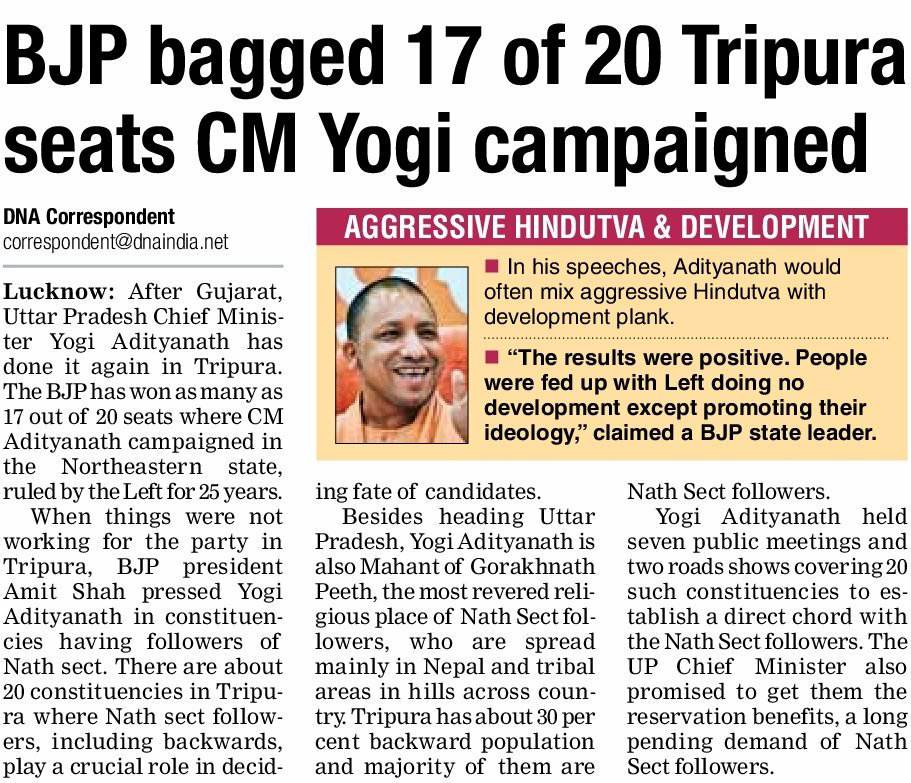 AND THIS IS WHAT WE WROTE EARLIER IN THE MONTH OF FEBRUARY.

Tripura is the second most populous state in the north east and BJP making inroads will be a significant development. The state of Tripura has been in media for all the wrong reasons with corruption scandals under the Manik Sarkar govt regularly making news. Manik Sarkar Government will face its toughest test to retain power in the wake of rampant anti-incumbency. The emergence of a strong BJP has provided an alternative to Tripura, that Congress never could. Yogi Adityanath has been relentlessly campaigning in Tripura.

Ever since Yogi Adityanath became the CM of Uttar Pradesh, his popularity seems to have soared. In no time he became the BJP’s go-to man for election campaigns, he effectively takes a lot of load from PM Modi’s shoulders. He has been campaigning in election-bound states for quite some time now. His tour in Gujarat yielded rich dividends. BJP won more than two dozen seats in places where Yogi Adityanath campaigned. Even in Karnataka, CM Yogi has been campaigning effectively. The way he rattled CM Siddaramaiah is commendable. The opposition has Karnataka in its election season is facing a combination of appeasement polity by its CM and soft Hindutva by Rahul Gandhi. CM Yogi’s style may help the BJP in springing a comeback here. CM Yogi is touted as a crowd puller only second to PM Modi and has proved his governance acumen as well. Most BJP fans consider Yogi Adityanath a natural successor of PM Modi.

Following the footsteps of Gujarat and Karnataka, BJP fielded CM Yogi for campaigning in the Tripura assembly elections too. CM Yogi is expected to address many rallies in the state and had public meetings at Kamalpur, Kanchanpur and Jubrajnagar. The party also requested him to extend his previously planned visit of one day and his campaign schedule was packed with rallies, road shows and temple visits. There was a lot of enthusiasm for CM Yogi in the state and the BJP believes he may add the necessary firepower to uproot decades of CPM rule under Manik Sarkar.

But Yogi Adityanath happens to be the Chief Minister of Uttar Pradesh, and Hindutva has never been a core issue in Tripura ever. So, what is Yogi Adityanath doing in the state and why is he so important for the BJP campaign? The answer lies in the influential Nath Community of Tripura.

in the quest to sway more voters, the Nath community can provide that essential push or a decisive jump in BJP’s fortunes and propel it towards a comfortable majority. In Tripura, a considerable population of Hindu Bengalis belongs to the Nath community and they follow Shaivism. Naths are classified as an OBC group in the Centre’s list, and they are quite an influential community in Tripura.

About ten lakh Nath sect followers reside in the state and they can decide the fortunes of as many as ten constituencies in 60 seat state assembly. These 10 seats hold a lot of importance in a closely fought election. Incidentally, Yogi Adityanath is the head of the Gorakhnath Mutt which happens to the fountain head of the Nath sect. Yogi Adityanath doesn’t just belong to the sect but is the unanimous leader of it. The religious head of the community campaigning in the state would be just the right push for the community to go out and vote for BJP.

Tripura is fundamentally important for CM Yogi Adityanath as well as it will demonstrate his prominence in the Nath community. An electoral success in the state also may help Yogi to further his national foot print and emerge as a Pan India leader.

Best Performing Universities to get Autonomy, Will be exempted from UGC inspections