by SKanth Polly
in Opinions
0

Now all I needed were some friends to join me. I started asking my friends. The following are few of the responses I got.

I wondered if I made a wrong decision in booking my flight tickets to Nairobi without so much as consulting my friends. I didn’t know what to do. I knew I could count on Sushma Ji’s Twitter handle if anything went wrong, and that does speak volumes about the confidence Indians have in their Foreign Minister.

I left for Nairobi not knowing what to expect. I boarded my flight from Mumbai and after six hours, I reached the Kenyan Capital. The moment I deplaned I was greeted with the word Jambo (Kenyan way of saying Hi or Hello) by the flight crew. I greeted them back with Hello.

I waited in the queue to get my visa. It was a lengthy process. The person in the counter was scrutinizing each document. When my turn finally arrived, I walked up to him. He greeted me with a Namaste. I was surprised. I said Namaste.

I handed him my passport. He glanced through in a jiffy and asked with a smile, “First time in Kenya? “

“Have a great stay in our country, we really like Indians coming to Kenya, “he said and stamped the visa on my passport.

I took my luggage and walked out of the airport. The first billboard I saw as I came out was of Airtel – Africa’s biggest network. I took an Airtel sim and called my driver.  I was waiting in the arrivals when my driver Peter came along in his Maruti Swift. I was surprised to see a Maruti in Nairobi. I felt as if I were still in India.

I got into my car and on the way to my hotel, I started conversing with Peter.

“Which part in India are you from? “he asked me.
“I am from Hyderabad, “I answered.
“Oh, south of India “he replied.

I was surprised. Frankly speaking, I didn’t even know which part of Kenya was Nairobi in.

“What else do you know about India, “I enquired.
“Indians are good people, they have small businesses in Kenya, they give employment to many Kenyans, “he replied.

That sounded nice. As I glanced outside on the streets, most of the tuk-tuks and some of the trucks were either Tata or Mahindra made.

“Many Indian vehicles in Kenya?” I said.
“Thanks to Kenyatta and Modi, “he replied.

I wondered who Kenyatta was. I googled, and found out that he was the President of Kenya.

“How is Kenyatta? “I enquired.
“Kenyatta is good, but he is not as good as Modi, “he answered.
“Why so? Is he corrupt “I asked him.

“No Kenyatta is good, he is the best we got here in Kenya but he isn’t as good as Modi, I heard Modi works very hard, sleeps very less, tell me which leader works so hard for their countrymen? How is Modi? “he said all in one breath.

“Modi ji is fine, how come you know so much about our PM Modi?” I asked him.
“He visited us recently and who can forget him playing the drums in Tanzania, such a humble gentleman. You can’t expect Putin or Trump doing that, “he remarked.

We stopped for lunch at a dhaba (or whatever they call them in Kenya) on the way to Mara and I was pleasantly surprised upon seeing rice, roti, dal and green peas masala for lunch.

“I didn’t expect Indian food for lunch,” I said to Peter.

“Indians fought along with us for our freedom struggle, they are a part of us and their cuisine is a part of Kenya,” he remarked. I was surprised I didn’t know anything about the history of Kenya.

We had a four-hour drive to the Mara and I slept in the car. Peter woke me up when we were half an hour away from the Mara. There was a herd of zebras crossing the road. There was greenery all around.  We stopped for fuel at a remote village near Mara. I got down the car and went into the store, as I was looking around the magazine shelf, I was pleasantly surprised seeing a magazine called African Business with a picture of Modi and Abe on the cover.  I was excited and bought the copy, as I didn’t really know anything about the businesses in Africa. 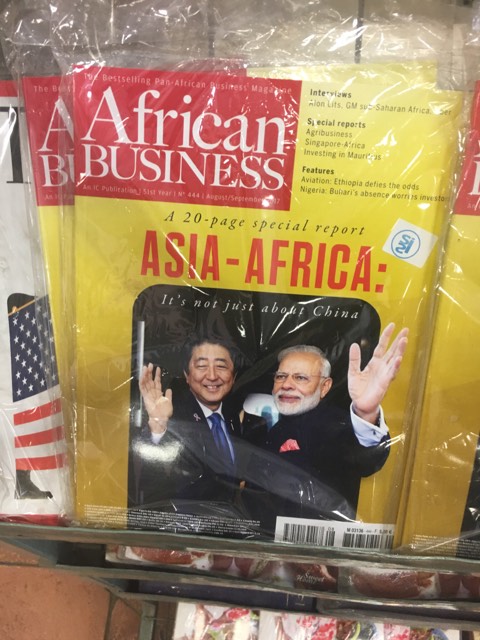 I showed Peter the magazine I have bought. He said, “Told you so, we all love Modi ji, but why is he standing with a Chinese guy,”

I told him, he was not a Chinese guy but a Japanese Prime Minister to which Peter replied “Good, hope Modi never allies with the Chinese, they are bad. They are trying to colonize Africa,” he replied.

I reached my hotel and settled down in my room for the night. I had a safari at 6AM in the morning. This was the time I started reading the magazine. It showed how China has been exploiting the poor economies in Africa and even had political control in counties like Djibouti, Chad and Zambia. China funds construction of infrastructure such as roads and railroads, dams, ports, and airports. China is the largest trading partner in Africa. There is a growing sense of fear of colonization in Africa, that’s where Japan and India come in. To prevent Chinese monopoly in Africa by providing African countries with safer, cheaper and better alternatives.

The next two days, I spend most of my time in the jungles, seeing hundreds of zebras, wildebeests and deer, I spotted many elephants, cheetahs, hippos and crocodiles. The lion was elusive, and we didn’t spot any on the first day. One the second day after searching the grasslands for hours we finally spotted a pride of lions. The lion was sleeping under a bush alone, while the lioness and the cubs were sitting together under a tree. As our car went past the lion it looked right into my soul and growled as if saying “Do not mess with my pride”. I took a spectacular photo of the lion and my safari came to a royal end.

I left for the airport next day and in the airport, I said good bye to Peter.

“Do come back again,” he said with a smile.
“I will definitely come back to see the lions,” I replied.
“Oh for that you don’t need to come so far,” he remarked.

I began to wonder, when foreigners in an under developed country respect PM Modi so much, why do few of our countrymen hate him. Then one of Peter’s quotes struck me – wild dogs, hyenas and vultures hate the lion. Sounded just about right!

Shiv Sena! Arguably the Most Confused Political Party of India

ALL LIES DEMOLISHED: How NYT Columnist Asgar Qadri Used Fashion as a Weapon to attack Modi and India