Kejriwal Accused Khattar for Doing Nothing about Pollution in NCR, Khattar Nailed him in a Scathing Reply

Delhi is engulfed under a blanket of smog. Visibility is low. The air has a distinct smell about it. The air is so heavy that you can feel it around you. Everything has turned grey. There is a thin grey film on trees, on car windscreens and on every conceivable object under the sun that rises and sets without much ado. This might sound like an excerpt from a novel describing the morning after World War III, but it’s the reality. The shocking reality of Delhi. Winter chill has set in, there is slight nip in the temperature and its eerily calm. So, every particle that goes up, stays right there unless inhaled by somebody.

The problem with the efforts afoot to solve Delhi-NCR’s pollution woes is that while they are high on optics and are peppered with the catchiest of slogans, they are not even remotely linked to the problem. Consider, for example the most recent ban on fire crackers by the Supreme Court. It seemed like an excellent thing to do to cut down on crackers which, undeniably contribute to the pollution in the city. The move was hailed as revolutionary and a lot of citizens willingly or otherwise complied with the Supreme Court’s orders. The quality of air post diwali, was much better than last year when Delhiites woke up to near blindness and a persisting choking sensation. Sadly though, the killer smog has returned to Delhi with a vengeance. Over the last two days, air quality has been so poor that it has prompted Delhi’s Chief Minister, whose favourite job seems to be reviewing movies, to label Delhi a gas chamber. Suffice it to say, that the Supreme Court’s directive banning sale and purchase of crackers during Diwali is a classic example of ‘Kahin pe nigahein, kahin pe nishana’.

The Delhi government mulled over bringing back the Odd-Even Scheme after claiming that the scheme brought down Delhi’s pollution levels last year. Experts across the spectrum ended up disagreeing. According to most experts, two weeks (for which the scheme was functional) was too short a span of time to arrive at a decisive verdict. Furthermore, air pollution caused by private vehicles is a tiny fraction of the total air pollution. Most of it comes from construction and industries. And of course, from burning of crop stubbles in nearby Haryana and Punjab for which Arvind Kejriwal launched a verbal tirade against both Punjab and Haryana CMs.

Arvind Kejriwal on Wednesday sent a letter to Manohar Lal Khattar and Capt. Amarinder Singh, his Haryana and Punjab counterparts and entreated them to conduct a meeting to find a solution to pollution menace in the National Capital Region. 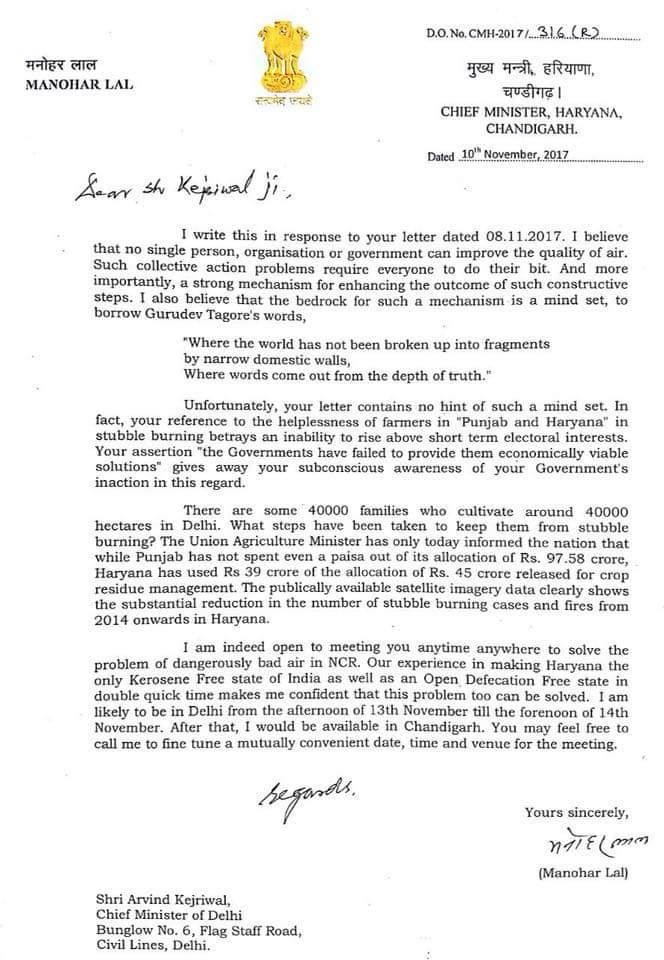 Kejriwal also blamed Khattar and Capt. Amrinder Singh for their failure in curbing the problem of stubble burning and utterly failing in the task of providing farmers in their states with a suitable and economically viable crop residue management system.

Manohar Lal Khattar is a man of very few words but he decided to respond to Kejriwal’s leter with utmost calm and hard cold facts.

In less than 300 words, Khattar made the following 5 points absolutely clear:

1.) That Kejriwal is doing nothing about Crop Residue management in Delhi

2.) That Khattar Government has proactively worked in this direction and there is enough data to prove that the government is on the right track

3.) That Kejriwal can never rise above partisan and electoral politics

4.) That Haryana is now Kerosene and Open Defecation free, a subtle dig at the MCD-Government tussle in Delhi

5.)That Khattar is ready to debate, deliberate and discuss about the problem face to face with Kejriwal, another subtle dig at Kejriwal’s Shoot & Scoot politics.

But we hope and sincerely believe that CM Kejriwal will appreciate CM Khattar’s gesture of replying to a non-serious politician like him and even inviting him for a genuine debate. And it is heartening to know that Kejriwal has accepted the invitation and will meet with Khattar to find out a cure to the problem that has rendered Delhi unliveable.

PM Modi Extends His Hands Towards Stalin and Karunanidhi?