Temple Grants to These 2 Hindu Schools in Karnataka were Stopped. The Reason is a Classic Case of Hypocrisy

Time and Again, people from educated class have questioned donations received by the Hindu temples- “why people donate money to temples instead of feeding the poor?” It is a general misconception that all the money that is donated to temples, goes into the pockets of the Mandir committee headed by Brahmin priests. People hardly know about the contributions made by various temples for social welfare and they are unaware about the fact that many Hindu temples run orphanages, old age homes, schools, dispensaries, etc.

The Mookambika temple of Kollur in Udupi district of Karnataka is one such temple, which helps many schools run. From 2007-2008 to 2016-2017, the temple had granted a financial help of Rs. 2.83 crore to two Hindu schools- Sri Rama Vidya Kendra in Kalladka and Sri Devi Vidya Kendra in Punacha.

The two schools are run by Sri Rama Vidyakendra Trust, which is led by an RSS activist Kalladka Prabhakar Bhat in Dakshina Kannada district. The grant was formalized when BJP-JD(S) alliance was in the government. The aids were used for midday meals, textbooks and uniforms of students.

The Mookambika temple manages 7 other schools in Kundapur taluk in Udupi district, one of which is a government school while the other six are unaided schools. This year, the temple decided to extend the grant to Sri Rama Vidya Kendra and Sri Devi Vidya Kendra. However, the Congress-led Karnataka State Government stopped the temple grant to both the schools. The Karnataka Government passed an order on July 31, 2017 cancelling the adoption of the two schools. The order claimed that as per the Hindu Religious Institutions and Charitable Endowments Act (HRICEA), 1997, no Muzrai temple can adopt any private educational institution. The government claimed that granting fund would be a burden on the temple. Karnataka State Dharmika Parishad defended the Karnataka government and called it illegal for any Muzrai temple to provide such grant. The Dharmika Parishad members concluded that the funds for several such schools including the Kadaba Saraswathi School should be cut off. RSS activist and the head of Sri Rama Vidya Kendra Trust Mr. Kalladka Prabhakar Bhat accused district in-charge minister B Ramanath Rai of playing vindictive politics against his schools.

If we analyse the HRICEA clause of 1997, Karnataka government’s hypocrisy becomes quite apparent. Section 7 of Chapter III in the Act categorically states that all those working in the department should profess Hindu religion [Link to the Clause]. However, there were seven Muslim and Christian employees in the department enjoying the job, which were meant for Hindus. A clear-cut violation of rules.

The government and the Dharmika Parishad explained that Muzrai temples cannot provided grant to any private schools. However, a Kannada local daily recently published a report claiming that funds from the Kateel Parameswari temple had been diverted to 5 Christian private schools. 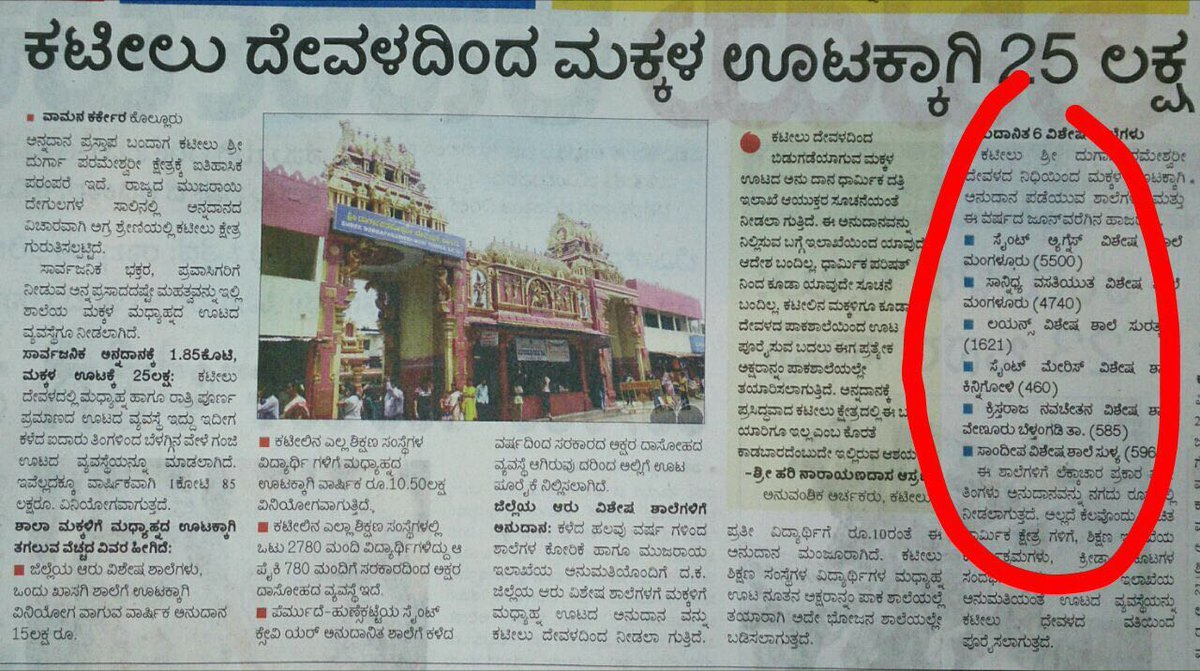 The names of the schools are as follows: –

So in one case the Government thinks that the temples were overburdened because of funding one set of schools while on the other hand, temples feel no pressure while funding another set of schools. Of schools. Though the government can claim that the funds were provided to special schools for challenged kids, but it does not change the fact that these schools are private schools just like the previous two schools. Rules should and must be the same for all.

The Sri Ram Vidya Kendra is famous for its unique way of imparting knowledge. Renowned actor Golden Star Ganesh had praised the school, its teachings on human values and culture. About 94% of the students from Sri Ram Vidya Kendra and Sri Devi Vidya Kendra schools are from the minority and backward classes, which include Dalit, Adivasi and Backward Castes. The withdrawal of the temple grant has affected about 4000 students. The students and their parents protested against the withdrawal of the grant that provided textbooks, uniforms and most importantly, the midday meal to their kids. Raising empty steel plates and bowls, the students and their parents protested in front of the Bantwal Taluk Office on B.C. Road. 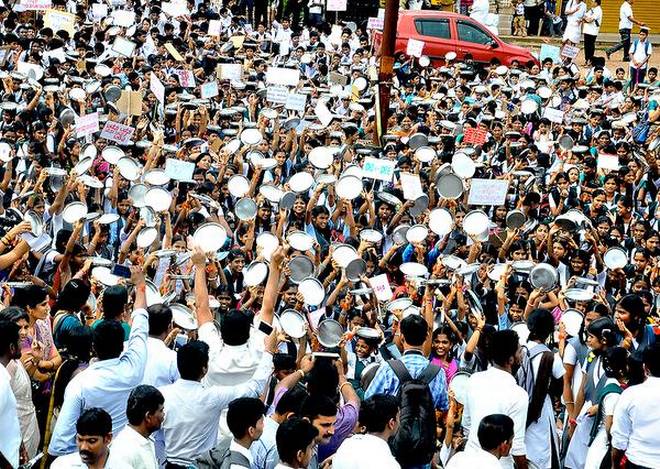 On August 14, Twitter User Mahesh Vikram Hegde started a twitter campaign with hashtag #Bhikshamdehi and #JusticeforKalladka. Kalladka Prabahakar Bhat had announced that he would go begging and arrange food for the children. The campaign gathered huge support and former union minister Janardan Reddy visited the schools offering a financial help of Rs. 26 lakh. By August 23, several people donated money for the school and the campaign collected an amount of Rs. 38 lakh and 5000 kg of rice for the schoolchildren.

Is it “hate politics”?

RSS activist’s accusation that B. Ramanath Rai is playing “hate politics” may have some substance. B. Ramanath Rai is MLA from Bantwal constituency in Dakshina-Kannada. Some unidentified assailants attacked an RSS activist named Sarath Madiwala near the Bantwal Town Police Station. Sarath died later due to injuries. During the funeral procession of Sarath, several miscreants pelted stones on the procession, which further created tension. Kalladka Prabhakar Bhat severely criticized the administration for the murder of the RSS activist and the degrading law and order machinery. In response to this, B. Ramanath Rai adamantly said that the RSS activist was trying to convert schools into a factories of communalism.

What is a Muzrai temple?

The Department of Religious and Charitable Endowments (DRCE) is a government department, which administers  Hindu temples, mutts and religious institutions as implied by the Hindu Religious Institutions and Charitable Endowments Act (HRICEA). For an example, in 2002, the Karnataka government collected Rs. 72 crore from 251,000 temples and returned Rs. 10 crores to the temples. The rest of the fund was used for other purposes including Rs. 50 crore financial help to Madrasas. The DRCE is also popular by the name of Muzrai department in Karnataka. Temples, which are under the HRCEA, are called Muzrai temples. The term “Murzai” was probably coined by Tipu Sultan.

Be it the salary of the priests, selection of committee staffs, appointment or recruitment of employees, etc everything is decided by the government. In cases, government can even sell the assets or lands of the temple.

The Absurdity of Pollution Control Measures in Delhi is Disturbing