If These Discoveries Don’t Make You Start Taking Your Sleep more seriously, Nothing Will

by Dev Desai
in Cinema
0

We spend a third to a fourth of our lives in this activity, which is approximately the same time that we spend at our work places and while everyone frets so much about their choice of careers, hardly does anyone pay any attention to this activity. What I am referring to is SLEEP. It comes so naturally and almost effortlessly to most of us, that we hardly think seriously about it. Nonetheless, from generations it has been a part of folklore across the world, be it Kumbhakaran in Ramayana or Sleeping Beauty from the West. And now, even the Nobel committee is taking notice of this oft ignored aspect of our lives.

The Nobel Prize 2017 for Physiology and Medicine was recently awarded to Jeffery C. Hall, Michael Roshbash and Michael W. Young from the United States of America for their path-breaking discoveries uncovering the perplexing circadian rhythms or biological clocks in animals (Source). While it has been known and speculated since centuries that sunlight affects the growth and development of animals and plants- be it sunflowers always facing the sun or the birds migrating from one hemisphere to another in accordance with daylight hours and seasons- what was not known was how such a phenomenon occurred at the physiological level and it was a subject of intense research. In 1970s it was hypothesised that there is a certain unknown gene called ‘period’ which influences and regulates the circadian rhythm (a 24 hour sleep-wake physiological cycle) in fruit flies (fruit flies have been the model organisms for an extensive array of genetic studies and we have a lot to thank these tiny creatures for whatever knowledge of genetics we have today). In 1984, Hall and Roshbash from Brandeis University, Boston and Young from Rockefeller University, New York collaborated on a research project which succeeded in isolating this elusive ‘period’ gene in fruit flies. 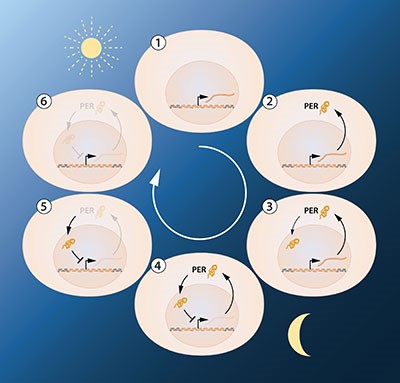 A gene is a basically a segment of DNA which ultimately gets expressed as a protein and it is the protein which performs the function at the cellular level (the central dogma flows like- DNA transcribed to mRNA and mRNA translated to protein- but for all practical purposes it suffices to know that the DNA of a gene gets expressed as a protein). Similarly, period gene is expressed as the ‘PER’ protein and the levels of PER protein oscillate in a 24 hour period setting the circadian rhythm of a fruit fly (SOURCE). But like every machine that man makes has a control and fine tuning mechanism, so do the genes, enzymes and other paraphernalia of life at the molecular level. So further research by the three scientists let to the discoveries of two more genes- timeless and double-time. The protein made by the timeless gene, TIM, binds to the PER protein and then it acts as a feedback loop (an omnipresent aspect of molecular regulation are these feedback loops- both negative and positive) inhibiting production of the PER protein. While the protein product of double-time has an opposite effect- it retards the accumulation of PER in the cell thereby preventing the negative feedback loop from acting. Thus, in a nutshell the complicated chemistry between the three proteins, makes the level of the PER protein oscillate in accordance to the 24 hour cycle of the fruit fly.

Once the fundamentals of the circadian rhythm were explained in fruit flies by the Nobel winning trio, it was soon realised that a similar but more complicated mechanism is at work in humans. 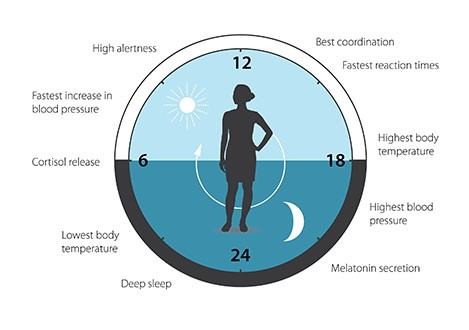 While to the layman, circadian rhythm means sleep-wake cycle, for a biologist, it is much more than that. Not only do our levels of alertness and activity vary between the two states of sleep and wakefulness, the entire physiology of the body acts differently. Various endocrine organs secrete different levels of hormones in sleep and wakeful state, the autonomic outflow varies and so do pulse rate, respiratory rate and temperature control. The cornerstone of circadian rhythm in humans is the hormone melatonin secreted by the pineal gland located in the brain. Darkness increases melatonin secretion while exposure to bright lights during night time decreases it. When we fly from one time zone to another, our body’s biological clock takes time to adjust the cycle of melatonin release according to the new daylight hours and hence we experience jet lag. Melatonin itself acts on each and every cell of the body and regulates production of different enzymes, proteins etc to tune the body to state of sleep or wakefulness.

SLEEP: WHY? HOW MUCH? HOW TO IMPROVE SLEEP QUALITY?

As mentioned at the onset of the article, sleep is something which binds one and all, and yet most of us do not think much about it. Guyton and Hall Textbook of Physiology defines sleep as unconsciousness from which a person can be aroused by sensory or other stimuli. There is an intrinsic mechanism behind falling asleep. That the central nervous system (brain and spinal cord) has a distinct consciousness and wakefulness promoting pathway in the form of the reticular activating system has been known since long. So a few decades ago, the passive sleep theory hypothesised that sleep is a passive process manifesting due to the exhaustion and reduced firing of the neurons in the reticular activating system after firing throughout the day. But later on it was realised that sleep is a much more complicated active phenomenon with distinctive sleep promoting areas in the CNS (namely preoptic area, thalamus etc).

Sleep itself is of two types- Non Rapid Eye Movement (NREM) and REM. We sleep in several 90 minute cycles comprising four stages of NREM followed by REM and then the next cycle commences. NREM is the deep, peaceful, dreamless sleep, while REM is associated with dreams and movements of muscles and eyeballs, in fact brain activity in REM is similar to that in the wakeful state. Both the stages have different mechanisms and serve different functions, though neither has been fully understood.

What exact function does sleep serve, is a matter of active research. It is hypothesised that our central nervous system is the biggest beneficiary of this period of decreased intentional activity and uses this as shut down time to repair, rejuvenate and organise (well put by psychiatrist Allan Hobson as: “Sleep is by the brain, for the brain, of the brain). Supposed functions of sleep range from rest and energy conservation to memory consolidation via reorganisation of synapses (synapse is the junction in CNS where one neuron touches the other). But experiment after experiment has shown that sleep is necessary for life and adequate sleep must for a healthy life. In fact, rats not allowed to sleep die within a matter of a few days and data from Centre of Disease Control, America (Source – CDC) shows co-relation between less than adequate sleep and a higher risk of obesity, smoking, chronic heart disease, hypertension etc.

What constitutes adequate sleep varies according to age. Toddlers sleep for a greater part of the day while as we age, our requirements gradually stabilise around 7-8 hours of sleep per day (Reference table, Source).  Quality of sleep is as important as duration. While there are hi-tech sleep labs and departments of sleep disorders coming up in several leading hospitals to help diagnose it, the rule of thumb is that if you do not feel refreshed and rested even after sleeping for adequate time, then chances are there is something wrong with your sleep quality (of course, other disorders like hypothyroidism or chronic diseases need to be ruled out at first). Obstructive Sleep Apnea (disorder associated with snoring) is a common disorder which affects the sleep quality of the patient as well as his or her partner.

So now that it’s clear, how important sleeping is, in case you are sleeping less, it’s time to let sleep take precedence over overtime work or that late night TV show. If you think you face problems with sleep quality, there are some simple steps you can try and they are known as ‘sleep hygiene’. They include having fixed times for sleeping and waking, avoiding stimulants such as coffee or tea in the evening, cutting down on exposure to bright lights (especially for those who are used to being absorbed in their mobile phones and tablets till late night), ensuring that everything from the mattress to temperature in your bedroom is comfortable etc. If you need further help, always feel free to contact a medical professional, BUT DO NOT CONSUME ANY OF THE OVER THE COUNTER SLEEPING PILLS BY YOURSELF or in doses exceeding those prescribed by a competent medical professional, because these pills have serious side effects including risk of coma and death. As they say- ‘The best way to see what tomorrow brings, is to sleep through the night’, so cast your worries away and get yourself a good night’s sleep.

French Economist Thomas Piketty Presented Some Disturbing Stats about Inequality in India, Every Stat Turns Out to be a Lie

Ravish Kumar Spread a Fake News Story that could have led to Caste Wars. No clarification from him yet.