Ravish Kumar Spread a Fake News Story that could have led to Caste Wars. No clarification from him yet.

Ravish Kumar is considered a fearless, smart and witty journalist who has the daredevil attitude to ask any damn question to any damn authority. The most iconic, and probably the most famous show/episode by Ravish Kumar was the “blackening of TV screen” amidst the JNU Row where he strongly criticized the current ‘intolerant’ environment of the nation. He accused people of India of becoming intolerant in the garb of nationalism, and batted strongly for Freedom of Expression. What he tried to suggest by blackening the screen is that some people, most media houses (which excludes NDTV), the current regime, the people and possibly the entire world have reduced a liberal debate into debauchery.

Ravish Kumar has been very prompt in blaming the current government for brainwashing people’s minds and turning them into bigots. The most recent example was the case in which two unidentified people allegedly attacked a 17-year old Dalit and slashed his back with razors for a silly reason- sporting or twirling his moustache.

This incident sparked a huge controversy and the Social Media reacted strongly. As expected, the media houses covered the news day and night. Media houses like NDTV and news portals like “The Wire”, “The Quint”, etc started to make an impression in the minds of the citizens of India, that India is intolerant towards its lower caste population and Dalits are killed and manhandled for slightest reasons. Dalit activists started revolution on the Social Media against the attack on the Dalit teen for “sporting moustache”.

Social Media flooded with protest messages containing a logo of a pair of moustaches with a crown underneath it, followed by the text “Mr. Dalit”. People posted photos of themselves twirling their moustaches as a mark of protest. 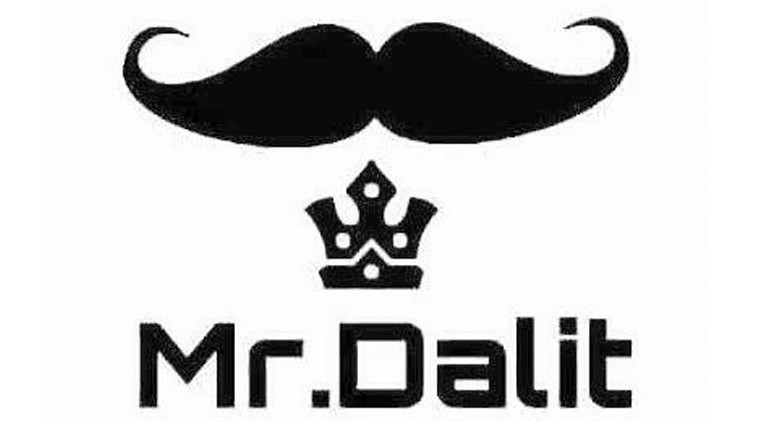 According to the news reported, the incident started on September 25 2017. The 24-year old Piyush Parmar is a resident of Limbodara village of Kalol taluk of Gandhinagar district. Three members of upper caste Darbar community allegedly abused Piyush and his cousin Digant Maheria by hurling Casteist comments when they were returning to their homes after watching Garba in their village. The boys avoided the group and returned to their home. According to Piyush, the group later came to their house and started assaulting them for “sporting a moustache despite being from a lower caste community”.

“As it was dark, we could not see them. When we went near the place from where the voice was coming, we found three members of the darbar community there. Just to avoid any scuffle, we ignored them. As we reached our house, the darbars came to our house and started abusing us again. They first assaulted my cousin Digant and then started beating me, repeatedly asking me how can you sport a moustache despite coming from a lower caste community,” Parmar told Times of India.

Digant Maheria, the cousin of Piyush was also allegedly beaten. On September 26, the Kalol Police registered an FIR against the trio from the same village, identified as Mayursingh Vaghela, Rahul Vikramsingh Serathia and Ajitsingh Vaghela. The FIR was lodged under IPC sections 323 (voluntarily causing hurt), 504 (intentional insult with an intent to provoke breach of peace), and 114 (abetment), besides the atrocities act.

On September 29, another similar incident happened with 30-year old Dalit called Kunal Maheria from the same village. According to the reports, he too was beaten by some people from Rajput community for sporting a moustache despite being from Dalit community.

“When I was visiting my friend on Friday night, Bharatsingh Vaghela and some others intercepted me and verbally abused me. Vaghela told me that I cannot become a Rajput by just sporting a moustache. When I ignored him, Vaghela beat me up with a stick,” Maheria said on Sunday. A complaint was lodged against Vaghela under IPC section 323. Vaghela was arrested soon. As with the first incident, this incident was also covered by the media, thoroughly.

The third incident took place around 5.30 PM on October 3 2017. Digant Maheria, the 17-year old cousin of Piyush Parmar, was returning from school after his exam when two unidentified person allegedly attacked him and slashed his back with razors. According to the report published by Deccan Chronicle:-

“Digant was present when Piyush was thrashed. On Tuesday, two men, who were wearing masks, intercepted Digant when he was returning home after giving his exam. The bikers told Digant that they have received Rs. 1.5 lakh to attack those who had lodged the FIR,” alleged his uncle Kirit Maheria. 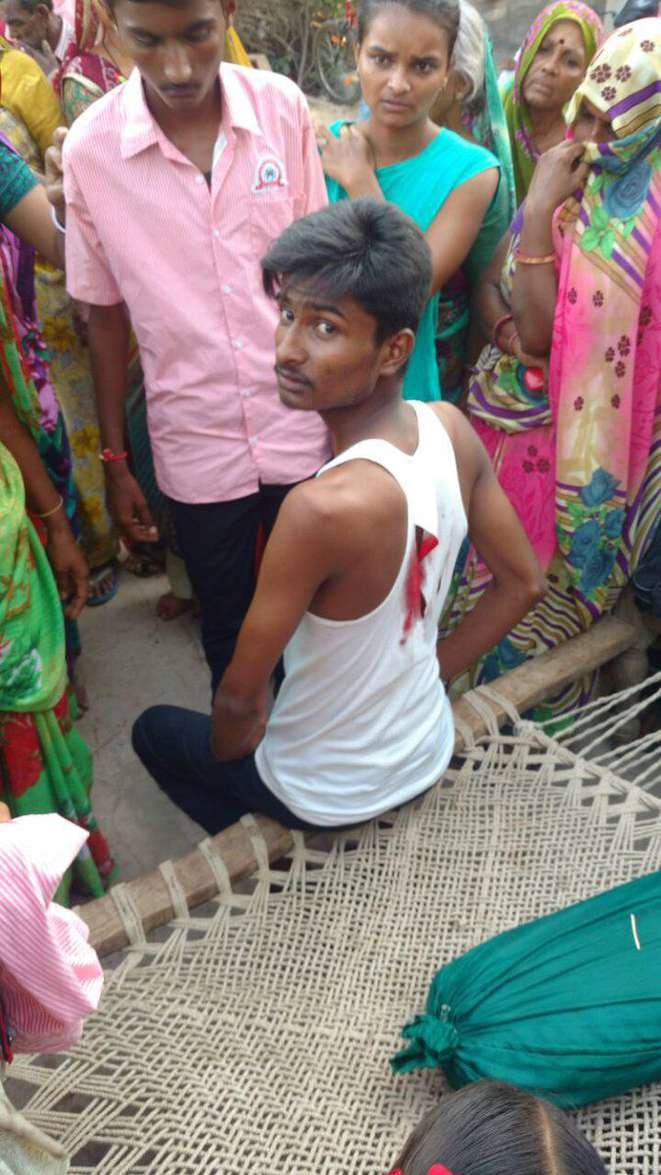 For more than one week, the media houses carried out descriptive coverage on their TV talk-shows until recently. Suddenly, they lost the zeal. The local police were investigating all the three cases and they found a strange thing.

According to the report published in Indian Express on October 4, the Gandhinagar SP Virendrasingh Yadav expressed his surprise, “The boy was attacked with a blade by two men on a bike who had covered their faces. When we investigated in the village, we were surprised that those nearest to the place of the incident did not hear any scream”. That was indeed surprising. Two people slashed his back multiple times, and the boy did not shout for help. He was not a mute, after all. The police formed three teams to investigate the case. The investigation revealed these findings:-

The Gandhinagar SP Virendrasingh Yadav said, “We also questioned his two friends and their parents who said they slashed their friend’s back on his insistence”. The police team made the findings public in a press conference where the father of the Dalit conspirator and so-called victim was also present. The father had also admitted his son’s mistake. SP Yadav said that since the three teens are minor, they are not escalating the matter because that might ruin their career. I must say that the Gujarat administration is a compassionate one where a teenager, who made a false accusation that had the potential to instigate riot in the region, was not sent to juvenile home. In contrast, the West Bengal police was trying to send a juvenile boy to jail instead of juvenile home because his Facebook post had caused a riot at Basirhat, West Bengal.

According to Indian Express’ report, Digant said- ““I am not under any pressure of anyone. I did it with the help of my friends. I do not know why”. Still shocked and ashamed for his son’s deed, Digant’s father said, “I don’t know what to say. My head is too full. I was there at the press conference and I admitted that my son was wrong. That is all I have to say. He has done it in the stupidity of his age, I guess. The boys who helped him live in front of our house”.

With the truth finally coming out, it is evident that there is a much bigger conspiracy running in the background to create chaos in the nation. It is time we all need to be alert.

The most important question is- “how will the media channels and Dalit activists react to this conspiracy?”

Will the Dalit activists criticize the boy for his misadventure or will they remain silent?

Will the media houses like NDTV and TV journalists like Ravish Kumar eloquently cover the news regarding the staged attack?

Will Ravish Kumar carry out his responsibility of responsible journalism by telling his audience that at least one out of three Dalit Beating cases in Gujarat was staged for publicity? And the rest are being probed.

To end the discussion with, let me put forward a question to Ravish Kumar. “Dear Sir, you once blackened your TV screen during the JNU-row. What will you blacken this time when the case is found to be staged?”

If These Discoveries Don’t Make You Start Taking Your Sleep more seriously, Nothing Will

From Being Unprepared for a 2-front War 19 Months Back to being Fully Prepared: How Modi Gov Boosted IAF in Record Time

The Tej Pratap-Kid’s conversation may be funny, but the kid has pointed at a systemic rot

How history was monopolized by Congress