Hindus in Mauritius have Made Hindus all over the World Proud

by Kushagr Sharma
in Culture
0

Mauritius is a small island off the coast of Africa. What makes the country so interesting is that it is the the only country in Africa which is Hindu majority. 670,000 Hindus reside in thi tiny and picturesque country, There are many Hindu Temples in Mauritius. However, this Navratri was special, the Hindus of the island achieved a very special feat. While Indians back home were busy debating Mamata Banerjee’s diktat on the immersion timings of Durga Idols, and whether Ram Mandir will be built or not, Mauritius went ahead and built the tallest statue of Durga Mata in the world.

Isn't our beloved Matarani wonderful? 6 days to #Durgotsav2017. Like and share the video. Tag all your friends to invite them. Jai Durga Maa…Sat 30th Sept 2017: Matarani ka Jagaran (bhajan & kirtan chanting) as from 6 p.m Sun 1st Oct 2017: Durga Puja as from 9h45 a.m by Gurujans from India & Mauritius

The huge statue of Durga Maa is found on the banks of Ganga Talao, a crater lake in the district of Savanne. Ganga Talao was discovered in 1887 by a Pundit who had a dream that there was a lake in Mauritius which was connected to the Holy Ganga in India. He went searching for this lake and added Ganga jal into the lake creating a Ganga for Mauritian Hindus, far away from Maa Ganga.  Ever since its discovery Ganga Talao has become a holy lake for Hindus who come from all over Mauritius to take a dip in the Talao. Eventually a beautiful Sagar Shiv Mandir was established on the banks. Then in 2015 a statue of Bhagwan Shiv was unveiled, it is the one of the tallest statues of Shiv Ji in the world.

On the 30th of September and 1st of October Mauritius unveiled the tallest statue of Maa Durga in the world.

This statue of Maa Durga is measured at 108 feet, 33 meters high. This making it the tallest Durga Mata statue in the world (surpassing Deshpriya Park Durgotsav in Kolkatta, India (80 feet high).

Construction of this “jewel of Indian art” started in 2011, the funding came strictly from donations and nothing was ever sourced from public funds. The project required six years of hard work, meticulous designing and it was built by workers from India and local sculptors and engineers in conformity with Hindu scriptures. The statue itself required 2,000 m3 of concrete and 400 tons of iron. The Murti of Devi Maa is located close to the murti of Bhagwan Shiv. The Murti of Bhagwan Shiv called Mangal Mahadev has already become a landmark and as a result, a key tourist attraction for the country. The Murti of Durga maa will also further bolster tourist attraction as it too will become another key place to visit for all tourists. 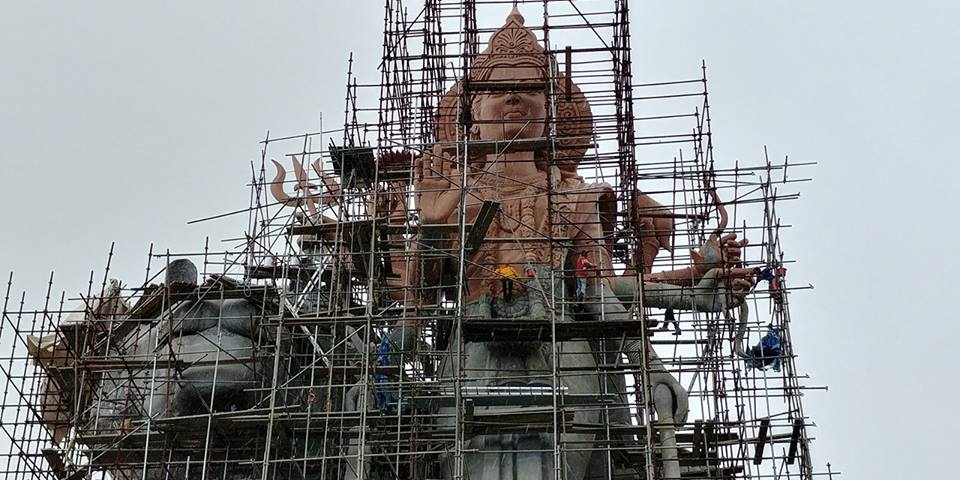 To unveil the Murti, A grand Durga Puja took place with attendance from Mauritians of all faith. The puja was planned months in advance in conformity with the Shubh Muhurat. It is heartening to see how Hindus away from India, have kept their beliefs and traditions strong despite being away for so long and so far away.

A coordinator for the trust of the temple, Mr Bheechock says he has already written to the Guinness Book of Records and LIMCA World of Records in hopes of getting this record registered. Maa Durga will provide her divine blessings to all the people of Mauritius in one way or another regardless of their beliefs. So next time you are in Mauritius, do make it a point to visit Ganga Talao, take a holy dip in the lake and soak yourself in the beauty, splendor and benevolence of Bhagwan Shiva and Maa Durga.

Rahul is Renovating Congress, by Replacing one Sonia Loyalist at a time

Finally a Non-BJP leader talks sense about GST and Demonetisation, After all those pointless rants

World Health organization to World Halal Organization: the Islamization of WHO

India was essentially a Kleptocracy under Nehru-Gandhi