by Krishna Baalu
in Opinions
0

Gauri Lankesh a Left lenient, mediocre journalist from Bangalore was brutally shot dead by unknown assailants in front of her house. This killing was brutal and condemnable by all fairness and so was aptly condemned by one and all keeping aside, the ideological affiliations, except the exception of a few silly social media activists who were rejoicing over her death. It is understandable if silly fellows, haul in support of her killing on Social Media, but it is not acceptable if well-known Intellectual cartoonists jump into conclusions and deliver a verdict in favour of Leftists by tarnishing the Right Organisations, without any evidence and much before the investigation into her murder began. This is what the renowned journalist Arnab Goswami has exposed neatly the fraudulent preparations of the so-called activists, who were preparing banners, naming RSS/BJP for the murder within hours of her murder.

It is relevant to mention here the latest development in the investigation before we analyse these cartoons on Gauri Lankesh murder. By the afternoon of 8th August, the clouds were mostly cleared and the real suspect has emerged. SIT suspects the Naxal Leader Vikram Gauda behind this murder. This news was telecast by a Kannada TV channel on 8th afternoon. The coverage detailed the Naxal factions and how Vikram Gauda was disturbed by the plans of Gauri Lankesh to make his other major group for a surrender before the Chief Minister of Karnataka. As the negotiations were advanced, the panicked Gauda decided to eliminate Gauri Lokesh. This is what a section of SIT believes, as per the TV reports.

As we are well aware Cartoon caricature is a powerful mean to send a strong message. If the depiction is ill intended, then a wrong message will be sent. I chose 4 cartoons drawn by 3 popular cartoonists (one unknown ) on Gauri murder. Two cartoons pointing fingers at Right Wing organisations, and the other 2 have neatly exposed the hypocrisy of the left libs. 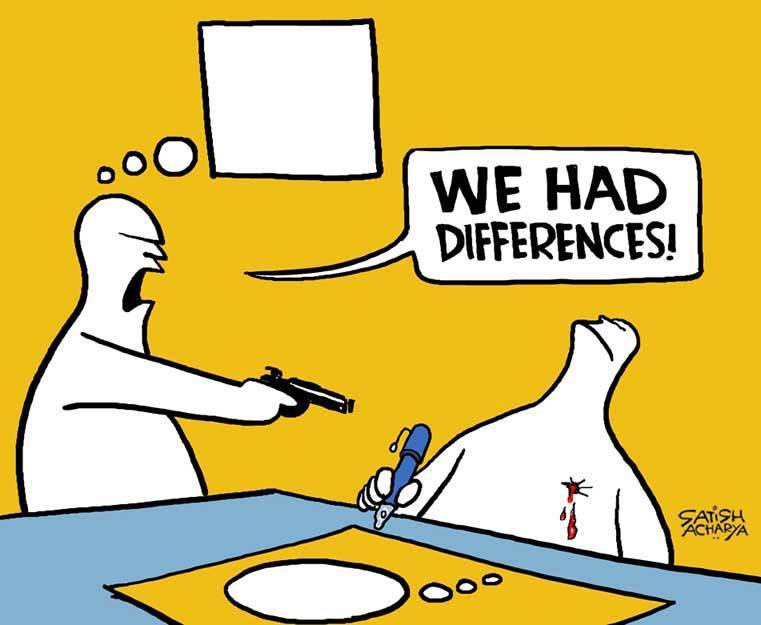 This Cartoon by Satish Acharya is a clever depiction, yet it squarely points the finger towards the Right Wing organisations. Gauri Lankesh is not depicted here. Some writer is shot, by an unknown person, shouting ‘we had differences’.

The writer though does not look like a female, but obviously, it’s Gauri Lankesh. The cartoonist too would agree because of the timing and context. The other side is the killer and is an unknown one. He too looks similar human to the killed one on the other side. When critics bombarded the post on FB, questioning the cartoonist for holding or depicting the Right wing organisations as the killers, he replied simply saying ‘I did not name any’.

This defence is logically absurd.

2) If the killer is to be inferred as an enemy with in, meaning, a disgruntled folk, with in the Leftist groups (Naxal leaders- this is what strongly suspected as of now by the probing SIT team ) then even the clash of ideology has no relevance but absurd too. It can be best described only as a ‘vendetta killing’.

3) If the killer is to be inferred as a person belonging to a Right Wing organisations, like RSS/BJP/VSP then and only then, this cartoon can be taken at its face value and accept the point that it aptly conforms to the intended message of the cartoonist. Because this is how the whole crowd which was mobilised by the Left wing Political parties, were shouting blaming RSS/BJP for killing the journalist for the simple reason of ‘difference of opinions’. This is what Rahul Gandhi too blamed RSS/BJP for killing the opponents when they do not agree with the ideology of Right Wing.

what so ever be the cartoonist’s apologies, it is not a neutral depiction but lewd one in taking sides, tarnishing Right Wing organisations w/o evidence. 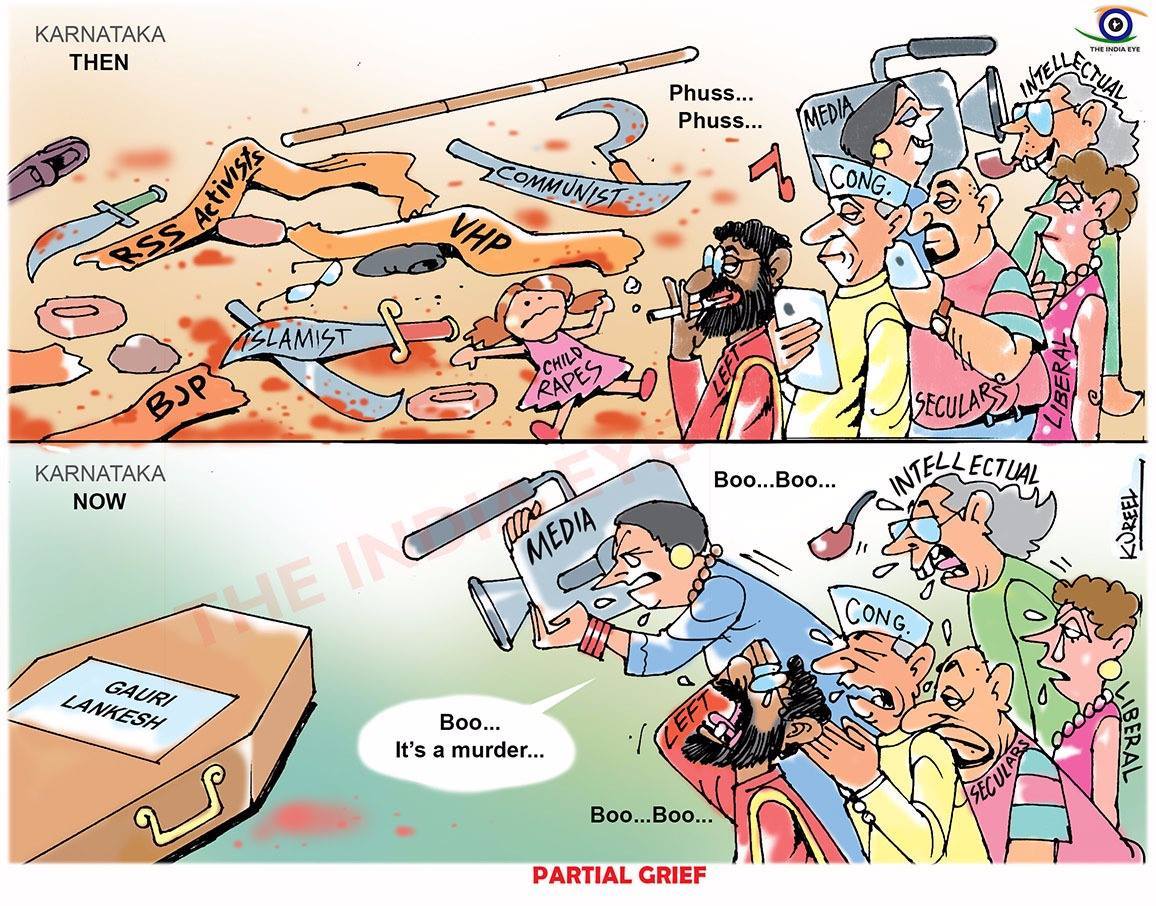 This cartoon by Manoj Kureel is simply bright, fair and honest. Here the cartoonist did not take sides, but just exposed the hypocrisy of the Liberals. At the outset, this cartoon is not judgemental but depicts the double standards of the self-styled Liberals. Scores of alarming killings of RSS workers, BJP activists by Islamists and Leftists goons went unheeded by these pseudo leftist groups, and media liberals but they woke up only when a left lenient nincompoop is killed in their own backyard. 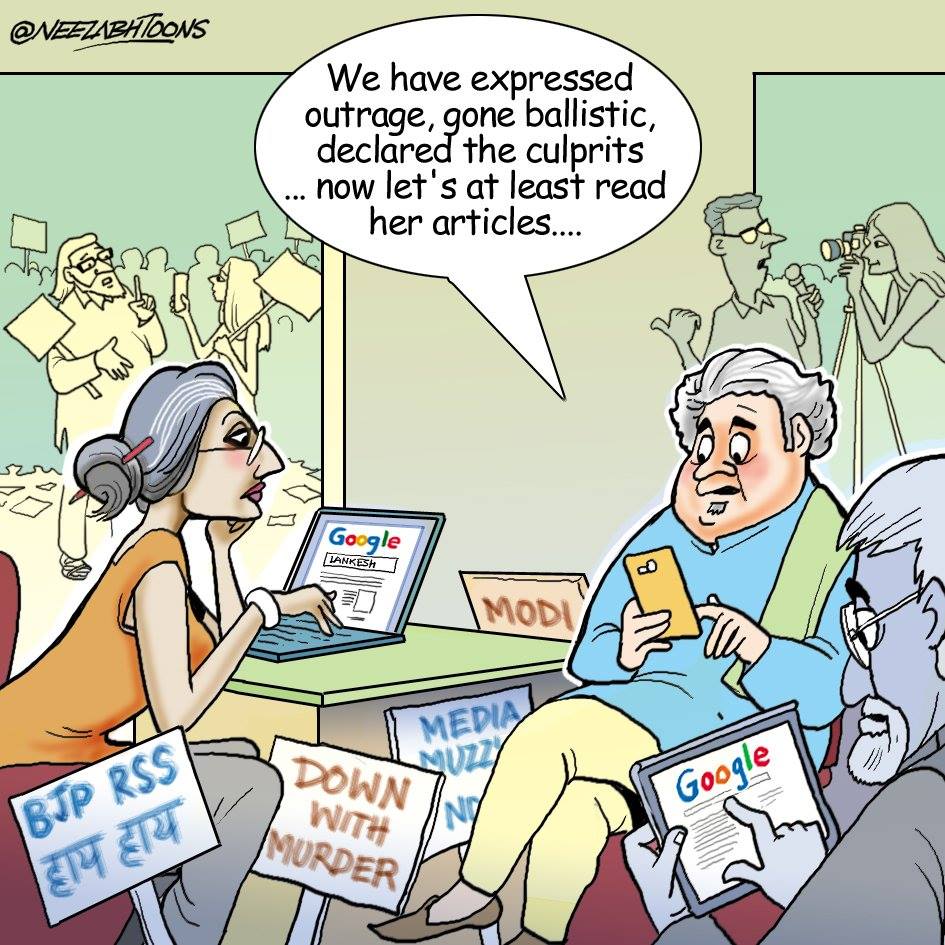 This one by Neelabh Banerjee is too good and too candid. Striking one too. In one cartoon, he has exposed the hypocrisy, double standards, bias, and atrocious behaviour of the Leftist liberals. It is self-explanatory. One guy is searching for Gauri Lankesh to know who she is, another is searching for her articles to know her ideology, and the other giving feed back in the office how they tore the Right, gone judgmental, identified the culprits and all only after returning from the protests. No home work was done before hitting the streets to protest, but only after returning to their office they started wondering who she was? 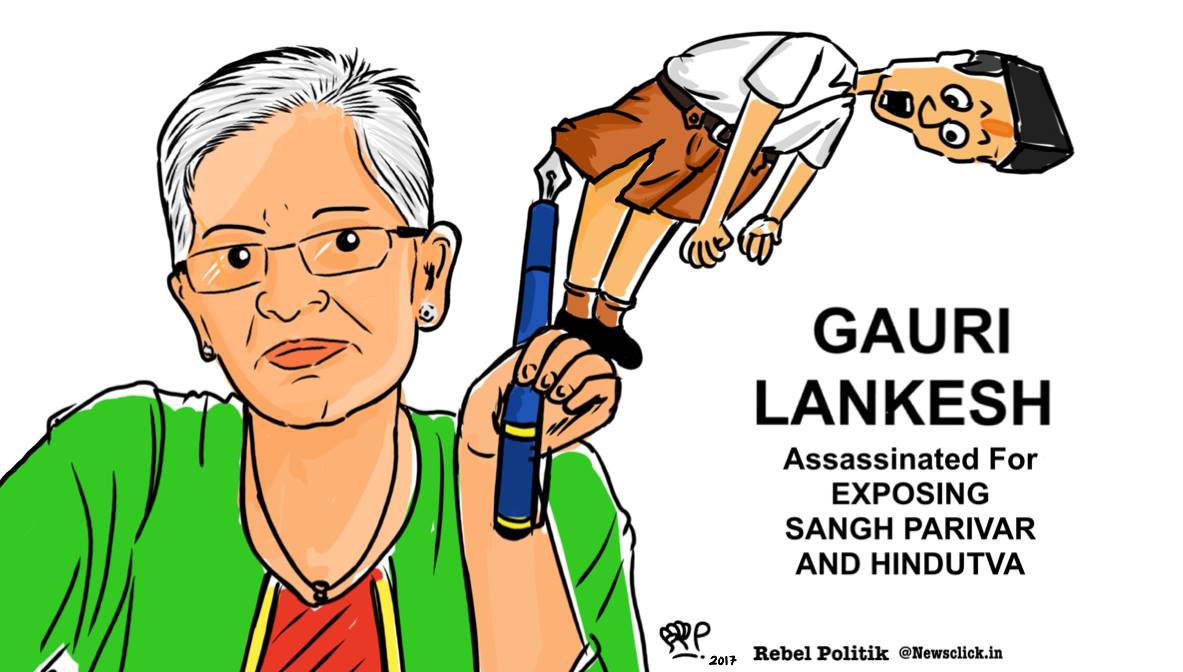 This one seems to be straight from the desk of a Naxalite outpost in Karnataka. See the declaration below. An atrociously brazen charge on Sangh Parivar and defaming it with out any evidence.

Pseudo liberals are highly manipulative. They have to be manipulative and melodramatic too, as their entire system is agenda driven irrespective of the reality and truth. Because they are committed to safe guard the religious minorities in India come what may. Their agenda is to paint a picture of Hindus as demons, non-Hindus as Angels. In the process, they need to discard rational thinking, unbiased expressions, and the truth. Simply this is the Truth.