BJP-BSP alliance in Uttar Pradesh 2017- Will the elephant and the lotus tango? 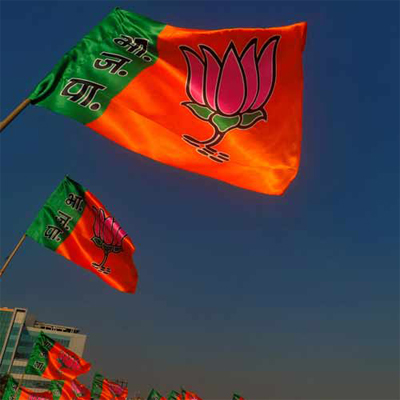 Can the BJP flag flutter high in 2017 in Uttar Pradesh

After a string of successes following the Ekla Chalo Re policy, Bihar has definitely proven that BJP cannot alone vanquish the opposition, especially if it is united. BJP’s Ekla Chalo Re policy might have worked wonders in 2014- BJP emerged as the single largest party in Maharashtra, even after breaking ties with the Shiv Sena. It won brute majority in Haryana, even after antagonizing Bishnoi’s Haryana Janhit Congress. And the icing on the cake was BJP’s stellar performance in J&K when it swept Jammu, resulting in the first PDP-BJP government in the state. In Jharkhand, BJP came on the top, but with the support of the AJSU. All in all, 2014 was an eventful year for the BJP. But, 2015 has been far less kind to the party. The Modi wave seems to be ebbing, which is natural, now that BJP is the party in power, people will expect it to deliver on its promises and not go by merely by its leader’s speeches. The debacle in Delhi was followed by the catastrophic loss that the party suffered in Bihar. While political analysts and Pundits will debate what led to the BJP/NDA’s drubbing in Bihar, vote share numbers explain the story clearly and succinctly. Even though the BJP had won a majority of Lok Sabha seats in Bihar (22/40 for the BJP and 32/40 for the NDA), its vote share was only 29.4%. The vote share for NDA was around 38%. Clearly, the only way BJP could win Bihar was if the opposition remained divided and the Modi wave continued. Sadly, the opposition JDU, RJD and the Congress joined hands. Effectively, this was now a battle between 38% vote share and 62% vote share. BJP’s defeat was foretold even before the elections were announced.

BJP’s loss in Bihar has the opposition spurred. They have now tasted blood. The simplest way to defeat the BJP is for everyone else to join hands against it. Even during the 2014 Lok Sabha sweep, the BJP’s vote share was a paltry 31%, as against 38% for the NDA. Clearly if the 62% vote share belonging to other political parties were to consolidate, the BJP can never ever come to power. Added to this is the BJP’s perceived slighting of its allies, its disinclination to win more partners and its brusque treatment of the opposition has effectively brought all anti-BJP elements together. BJP will now need to carefully tailor its strategy in light of these developments. The next big electoral battle will be fought in 2017 in Uttar Pradesh. BJP must come out all guns blazing to deliver a stellar performance in Uttar Pradesh. The main political parties in Uttar Pradesh are- Samajwadi Party, Bahujan Samaj Party, Bhartiya Janata Party and the Indian National Congress, Seat and Vote shares of the last two assembly elections were as follows-

Not surprisingly, Some Samajwadi party leaders have raised the subject of SP-BSP Grand Alliance to do a Lalu-Nitish on the BJP. A glance at the vote shares of the two parties shows that this alliance will be invincible. In 2007, the BSP-SP combine held some 55% of the votes and nearly 75% of the seats. In 2012, the two again held some 55% of the votes and some 75% of the seats. Even during the 2014 LS elections, the vote share of SP-BSP was a formidable 42%, just a shade less than that of the BJP. An SP-BSP-INC alliance could easily obliterate the BJP and script its obituary in the 2019 LS elections. However, this is easier said than done. The last time the SP and the BSP joined hands was in 1993, when under the slogan of “Mile Mulayam Kanshiram, hawa mein ud gaye Jai Shri Ram”, the SP-BSP alliance had taken shape. However the alliance ended in a couple of years, giving rise to the deep antagonism between Mulayam Singh Yadav and Mayawati owing to an incident dating back to June, 1995 when the BSP chief was held hostage by SP musclemen in a guest house. This was just a day after the BSP severed its alliance with SP. The SP-BSP alliance was a non-starter from the beginning as the two parties have a divergent social support base, clash in terms of agrarian relations and have a history of animosity between them. This is probably why, Maywati shot down any suggestion for an SP-BSP alliance, emphatically declaring that she would go it alone in 2017.

Will the elephant survive 2017 UP elections?

BSP is widely credited for the disappearance of the Congress and the enfeeblement of the BJP in Uttar Pradesh politics in the 90s and the early 2000s. Both the BJP and Congress saw their vote banks slipping away after allying with the BSP. The BSP boasts of a strong, dedicated vote bank of Dalits. In 2007, Mayawati was able to create a Brahmin-Dalit alliance under the slogan “Brahmin shankh bajaega, hathi badhta jaega” . This was a far cry from the earlier BSP slogans of “Tilak, taraju aur talwar, unko maro juthe chaar” that Kanshiram had used to consolidate the Dalit votes, and reaped rich electoral dividends. BJP and BSP have led alliance governments in UP in the past. Suffice it to say that they were not the most stable administrations. The first BSP-BJP administration fell apart after Mayawati refused to handover the rotational CMship to BJP. The second one in 1997 was plagued by the split that the BJP engineered in the BSP. Ever since then, BSP has followed an Ekla Chalo Re policy of its own and has been able to increase its vote share and its clout. The challenge for Mayawati is that BSP’s vote share has been shrinking since 2007. From 30% in 2007 to 25% in 2012 to 20% in 2014 LS elections, this drop of vote share has been giving Mayawati nightmares. The rise of BJP under Modi has meant that BSP will struggle to re-create a rainbow coalition of upper and lower castes in 2017.

The electorate in Uttar Pradesh was tired of Mayawati’s corruption, her opulent lifestyle and her ostentatious administration. Her core Dalit vote bank was annoyed with her for having moderated her anti-Upper caste stand. All this led to the decimation of the BSP and the resurgence of SP in 2012 elections. Three years later, the mood is very different. People remember Mayawati’s rule for the curbs she had placed on goondaism and how she had established the rule of law. Communal violence had all but disappeared. People seem to have already grown disenchanted with SP misrule. Akhilesh Yadav has even been rebuked publicly by Mulayam for his inefficient administration. Mayawati therefore has a good chance in the 2017 polls. The only factor which might block her path towards victory is the performance of the BJP. The BSP might be worried about the outcome of a four-cornered fight between SP, BSP, BJP and Congress (a similar fight in 2014 LS elections saw BSP reduced to a zero). The BJP might be worried about a Mahagathbandhan that will doom its prospects from the start. It might not be a bad idea for the BJP and BSP to enter a pre poll alliance (with the BJP-PDP alliance serving as the guiding light). There is no doubt that the alliance will sweep UP polls. The union of Upper Castes and Dalits will be a potent force to be reckoned with. Dalits are believed to be some 21% of Uttar Pradesh population, Brahmins alone are some 15%, Thakurs make up some 8%. This combine will be pitted against the Yadavs-9% and 18% Muslim population. BSP can pursue its agenda of curbing goondaism and social justice while the BJP can keep a check on Mayawati’s corruption and ostentation. The dispensation might also work to the advantage of the BJP, which, like Bihar has no visible leadership face in Uttar Pradesh. While there is no doubt that this is easier said than done, some obvious sticking points will be the antagonism between each party’s vote banks, the image of Mayawati as a feudal leader, the expectation of BJP cadre to fight it alone, the previous failed BJP-BSP alliances, the threat of BSP winning more seats than BJP and eroding its vote bank etc., but the alliance might just be a Win-Win for the BJP, the BSP and UP’s citizens. It might also help the BJP in gaining strength in the Rajya Sabha and also in 2019 LS elections, where the results of 2014 might be difficult to repeat.