by Shivam Jaiswal
in Geopolitics
0

The Latin American countries are grappling with a cascade of challenges to the detriment of their budding economies. But owing to their historical disagreements with the United States, Chile and Mercosur (a South American grouping consisting of Argentina, Brazil, Paraguay, and Uruguay) are all the more looking towards the East and not the North. Consequently, China has taken over as the top trading partner in the region. However, India too is showing blossoming prospects of trade with the Latin American nations in the times to come, despite all odds.

LA out of Indian sight

Traditionally, the foreign policy of India was restricted only to the Asia-pacific and the strategic partners. But in recent times, the oldest-civilization of the world seems to have undergone a holistic overhaul in approach to enhance its footprints to obscure and more remote economies of the world. Evidently, in a turn of fate, New Delhi has after a hiatus of several years, started to pursue a more ‘aggressive reach-out’ policy.

India is finally on the right track with the reversal of policy to sign more trade agreements and engage more with left out nations. Thus, owing to the positive outlook, India has for the first time in history, achieved annual exports of more than US$ 400 billion in 2021–22. 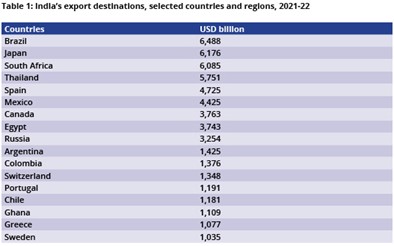 However, it is more promising to note that the Indian exports to Brazil stood at US $6.48 billion, outperforming FTA partners like Japan (US $6.1 billion) and Thailand (US $5.7 billion). In addition, the exports to Mexico stood at US $4.4 billion more than exports to Canada (US $3.7 billion) or Russia (US $3.2 billion). Conversely, making the Latin American nations one of the most prominent export destinations for Indian goods. Despite the region being conspicuously out of sight from the corridors of power in New Delhi.

Also read: From Chile to Brazil, China is losing Latin America. One country at a time

Great prospects of trade in LA

Interestingly, the Latin American economies provide great prospects for providing wings to the lagging ‘South-South Cooperation’ of India. Evidently, not only the exports to Brazil witnessed an upsurge of 53% from 2020-21, making it the most preferred destination for Indian exports. Further, Mexico that is placed second in the list of Latin American nations also imported 4.42 billion dollars worth goods from India with an increment of 43%.

Consequently, the exports to the three major trade blocs in the Latin American region accounted for 8.28 billion to Mercosur, in addition to 7.88 billion to Pacific Alliance and another 1.95 billion to CAFTA (Central America & Dominican Republic).

The current state of affairs indicates that India has a fairly positive image in the Latin American economies, and these nations too look towards India with a ray of optimism. However, on the flip side, the exports of India are still only 5% of the total imports to the region, making it imperative on the part of the India government to explore the uncultivated and available possibilities in the region. Further, the Indian foreign policy needs to inculcate more LA-centric policies.

Also read: Latin America has officially opened its doors for India and Brazil is the first step

Fallacies of previous governments in dealing with LA

The irony of the matter is that India only enjoys ‘Preferential Trade Agreements (PTAs) with Chile and Mercosur, a South American grouping consisting of Argentina, Brazil, Paraguay, and Uruguay’, which means that there is limited scope of bilateral engagements with slightly lower import duties rather than duty-free access to these markets. Yet, the private sector of India has not only succeeded in making inroads but also thrived in Latin America. Thus, the situation draws the attention of the government to enter into FTAs or Comprehensive Economic Partnership Agreements (CEPAs) with the governments of these economies.

Regrettably, as a matter of fact, the region has been out of the ‘geo-economics calculations’ of the Indian government for a long time. However, it is equally important that the Modi government has now started to shift its focus to the region.

Be it the previous visit of Dr. S. Jaishankar, or the recent visit of MoS Meenakshi Lekhi to the region, the foreign ministry of India seems to have taken note of exploring the possibilities available in the region. Moreover, the region has not only great economic prospects but also great geopolitical significance for India as well.

India is present in Latin America, but China outshines India in the region with a mammoth US$400 billion trade with the South American nations. In contrast, India has only a meager trade which ranges from $30 to $50 billion annually.

Further, the Chinese have made hefty investments of approximately US$159 billion in the region that solidifies the hold of China in the region. Thus, if India has to challenge the imperialistic Chinese and keep the unfaithful US under check, the Indian government has no other option than to explore the uncharted possibilities in the Latin American region.

India has great prospects of garnering effective and long lasting trade relations with Argentina, which has recently thanked India for the unfailing support not only during the Soccer World Cup, but also looks towards India with great deal of optimism when it comes to boosting defense, pharma, and other significant sectoral trade ties.

Argentina, like other Latin American nations, has started to shift its focus away from China, due to trust deficit, thus, it provides India with great leverage to chip-in and help Argentina overcome the economic crisis and lay seeds of long lasting strategic partnership.

On similar lines, Mexico is also having serious issues with the United States, consequently India can fill the void and strengthen its bilateral trade with Mexico. These opportunities can thus help India blossom trade ties with LA economies in the times to come. It would further give wings to the Indian export industry and would furnish lucrative opportunities for Indian corporations to skyrocket the South-South Cooperation policy of India.