India is among the countries with the lowest health care insurance penetration. The private players have failed spectacularly in convincing the common people about the benefits of healthcare insurance. The rising medical inflation and low-income are some of the structural issues behind this but the industry’s dishonesty, problems in making claims and various riders (known as terms & conditions) to every insurance scheme have ensured that people do not see much benefit in taking health insurance.

While India has one of the highest penetrations of life insurance, the health insurance sector remains a laggard

“I had to beg and cry my eyes out to the insurance company to pay me what was due. Every time a different person picked up the phone call and I was forced to explain the situation every single time, all in vain,” says 57-year-old Vidhisha Sharma who underwent a hysterectomy.

A working paper titled Fair Play in Indian Health Insurance shows that health insurance claims in India are not paid as much as they should be. The data also showed that India has the highest complaints rate when compared with other countries like Canada, Australia and the UK. 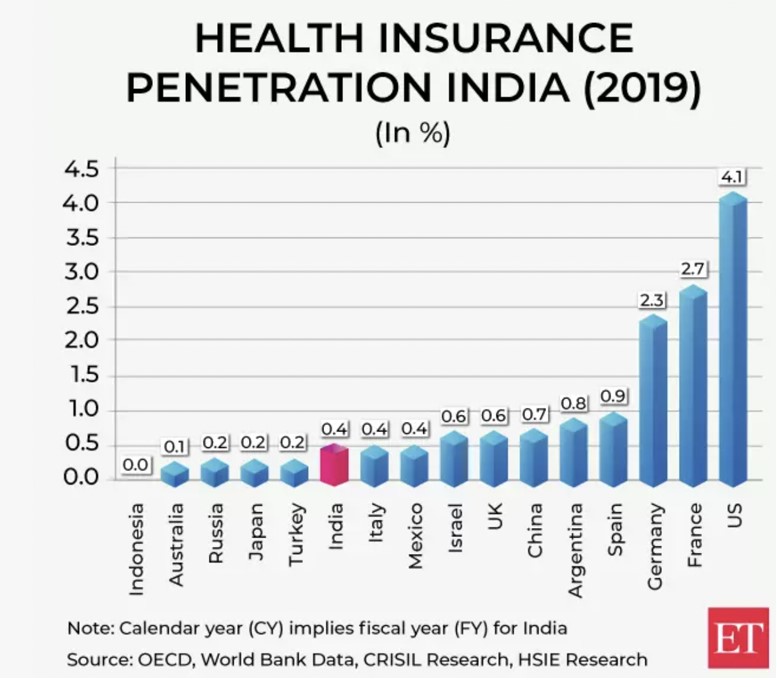 Consumers face so many issues in making a health insurance claim that most of them do not even try, especially for small expenditure in thousands of rupees. However, when the expenses go up in lakhs and the consumer tries to claim the bills, the insurance company comes up with one excuse or other to not pay the money.

The company will tell the consumer that the claims are misrepresentation and fraudulent in order to not pay the money. Consumers have very little confidence that they will get the money if they have the insurance. That is the reason behind hesitancy in taking the plunge of depositing the premium which goes in thousands of rupees per month.

“Nowadays the most common grievances we come across are claims rejected on the grounds of ‘misrepresentation and fraudulent claims’. A lot of companies which vaguely quote terms and conditions based on which they just reject claims,” says a claimant.

Another reason behind the low healthcare insurance penetration is the fact that medical inflation is around 14%, making premiums very expensive. Also, the government expenditure on healthcare is very low in India at around 1.2% of GDP.

The Modi government, since coming to power, has come up with schemes like Ayushman Bharat Yojna and National Digital Healthcare Mission (NDHM) in order to reduce healthcare chargers and increase public expenditure, but these are in initial stages.

The Modi government must also be credited with the reform in medical education. This will lead to an explosion of medical graduates like we witnessed in the engineering sector in the last two decades. Once the number of medical practitioners increases, the competition will automatically bring down the cost.

Also, the rising use of digital technology for consultation and purchase medicine, entry of big players like Tata and Ambani in retailing of drugs and online consultation apps is expected to bring down the cost of healthcare substantially.

The private sector needs to step up and walk hand in hand with the government to ensure that the medical services are available to everyone in the country just like low-cost digital services are universally available.

Ayushman Bharat scheme covers 10 crore poorest families of the country, or almost 50 crore people. It is therefore, the largest public healthcare scheme in the world. Currently it covers almost 40 percent population of the country. But the government aims to expand it to bring three fourth of Indian population under the scheme.

“The scheme is expected to expand to cover about 70 per cent of the population over time as both centre and states add several more vulnerable sections of the society to this cover,” said a study conducted by National Health Authority, the agency responsible for implementing PM-JAY.

PM-JAY offers treatments at 20 percent lower rates than the Central Government Health Scheme (CGHS) and Rashtriya Swasthaya Bima Yojana (RSBY) under what is touted as the famed Modicare.

Public healthcare is in a dire state in the country, as the Congress Party which ruled the country for decades could not provide universal healthcare despite its repeated promises to do so in every election manifesto. Healthcare in the country has primarily been in private hands being very expensive, therefore most of the poor people are denied affordable care.

According to the draft of the National Health Policy, “Over 63 million people are faced with poverty every year due to healthcare costs alone. It is because there is no financial protection for the vast majority of healthcare needs.” Ayushman Bharat will curb the out-of-pocket healthcare expenditure and help people to come out of vicious cycle poverty and disease.

The poor and needy were earlier required to sell their assets in order to get quality healthcare or landed up borrowing money from Sahukars who levied heavy interests. The share of non-regular expenditure on healthcare in proportion to total household monthly per capita expenditure stood at 6.9 per cent in rural areas and 5.5 per cent in urban areas.

The scheme launched by Modi government is the largest health coverage in the world. It will provide 5 lakh rupees health insurance cover to 50 crore people, which is nearly 40 percent of the population of the country. Besides the insurance cover, the government will create 1,50,000 wellness centres across the country under the Ayushman Bharat scheme. The families to get benefits of the scheme will be identified from the Socio-Economic and Caste Census (SECC), 2011 data.