by Tejasvi Malhotra
in Economy, Geopolitics
0

Unlike their 70 years of ruling, the incumbent government is willing to take the courageous calls to fulfil the domestic needs of the people. After banning the export of sugar and wheat, as reported by TFI, the Indian government is all set to ban the export of broken rice.

From “free” to “prohibited” export policy of broken rice

Due to a shortfall of supply for local needs as a result of a significantly “abnormal” increase in exports, the Union Ministry banned the export of broken rice while warning of an increase in its price. This came after the government imposed a 20% export duty on all non-basmati rice, with the exception of parboiled rice.

Sudhanshu Pandey, the Food Secretary said, “This is not a normal increase of exports. This is absolutely abnormal.” He made this statement while observing a 42 times hike to  21.31 lakh metric tonnes (LMT) during April-August 2022 as compared to 0.51 LMT during the corresponding period of 2019.

Meanwhile, he also shared a country-wise data that shows China as the top buyer of Indian broken rice by 15.85 LMT in 2021-22. The communist country was followed by Senegal, Vietnam, Djibouti and Indonesia. 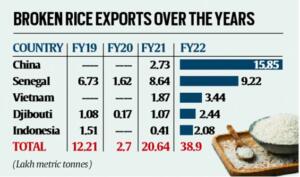 Aside from that, the Food Secretary is concerned about the increase in price from roughly Rs 15-16 per kg on January 1 this year to Rs 22 per kg on September 8. “As a result, broken rice is also not available either for poultry feed or for ethanol for which they were using broken rice or damaged food grains.”

On the other hand, three categories of broken rice have been given some relaxations, where consignments will be allowed between September 9 and 15.

Read more: After capping sugar and wheat, India is all set to halt rice exports as well

An exponential growth in rice export

Meanwhile, observing the statistics marking an exponential increase in exports, Sudhanshu Pandey said, “If you see the broken rice export figure for the full financial year, it shows an increase of more than 300 percent from 12.21 lakh metric tonnes in 2018-19 to 38.90 LMT in 2021-22. This is not a normal increase by any stretch of imagination. If your exports are growing by 4 or 5 or 6 percent, then this increase is abnormal.”

It is imperative to note here that the Indian rice is under a spectacular demand, resulting in becoming the world’s second largest rice producer after China. It is evident from the value of rice exported from India. In FY 2015, it marked US$3.48 billion of basmati value and US$2.37 billion of non- basmati. While in FY 2021, it received an immense hike to US$4.02 billion for basmati rice and US$4.8 billion for non- basmati rice.

Read more: After wheat, India stops the mindless export of sugar to the world

For some time now, India has felt the need to regulate its export in light to unavailability in the domestic market. Especially in the aftermath of Russia- Ukraine war, the situations have become more dampen.

As reported by TFI in May, India decided in banning the export of wheat. The government stated that it is committed to ensuring food security for its population and other key partners. However, the exception to the ban was to either in cases where irrevocable Letters of credit have been issued or in case the government decides that a country desperately needs Indian wheat.

In the same month, the Indian government also planned to restrict sugar exports for the first time in six years. It was decided to prevent a surge in prices. Following Russia’s invasion of Ukraine, the prices of food have skyrocketed and governments across the world have resorted to taking measures to protect domestic prices of certain commodities.

It is not as if it’s permanent in nature. As soon as it is ensured that everything is fine in the international market and domestic market, we will be back providing our crops to thalis of the world.

Bloomberg suggests that India has grown militarily weaker due to Make In India, we quietly demolish this propaganda piece