After being called out by Islamists, Rana Ayyub ‘corrects her mistake’

Love her or hate her – does not matter what your ideology is but you must have heard of Rana Ayyub. Ayyub is not only a liberal but is also accused of financial fraud and swindling. Ayyub dupes innocent people without thinking twice and will do so with a moral superiority complex placed firmly in her head.

Self-proclaimed journalist Rana Ayyub had put out a tweet to pray for Satanic Verses author Salman Rushdie’s recovery. For those unversed, he was stabbed multiple times on Friday evening in New York. The suspect has been identified as Hadi Matar, who has been charged with attempt to murder. It is believed that Rushdie has been attacked for his allegedly blasphemous book ‘The Satanic Verses’, which is a satire on the life of Prophet Muhammad.

In her tweet, Rana Ayyub had written, “Praying that Salman Rushdie recovers back to good health. Waiting for updates.

Rana called out by Islamists

Soon after the tweet caught the attention of the netizens, her Muslim supporters began coming down heavily on Rana Ayyub. The Muslim community on Twitter started condemning her. Many Islamists schooled Ayyub for wishing well upon someone who had ‘blasphemed’ about Prophet Muhammad.

Others slammed Ayyub for trying to appease the West. Ayyub, for those unversed, has become a darling of Western elite liberals as she has become a prominent anti-Modi voice who plays the minority card well.

One Twitter user also spoke about how he initially followed Rana Ayyub for voicing Muslim issues but seeing her pictures on Instagram made him realise that she too, has a career to build. 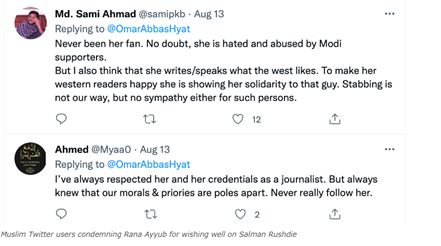 Witnessing the outrage by her co-religionists, Rana Ayyub deleted her tweet. Well, what could she have done to prevent the outrage? She cannot dump her co-religionists to stand by what is correct, right? Doesn’t it take courage to not get influenced and scared by few miscreants and speak for what it right? Ayyub, unfortunately, doesn’t have the courage.

However, ever since she deleted the tweet, her Muslim comrades have begun showering praises on her again. She is being cheered with the messages that she has ‘corrected herself’.

Read more: Rana Ayyub’s old words come to bite her as she cries foul over ‘Hum Do, HumareBaarah’

Ayyub must be praised for her loyalty towards the community. Rana Ayyub not only deleted the tweet but to please the community, also put up another tweet. In her new tweet, she attempted to mock the non-Islamists for condemning attack on Rushdie reminding them that Rushdie was a Modi hater.

She tweeted, “All the holier than thou must remember how they hauled Salman Rushdie over the coals when he stood in solidarity against rising religious intolerance in Modi’s India. He was derided as a member of the ‘award wapsi gang’. Extremism needs to be nipped in the bud around the world.”

All the holier than thou must remember how they hauled Salman Rushdie over the coals when he stood in solidarity against rising religious intolerance in Modi's India. He was derided as a member of the 'award wapsi gang'. Extremism needs to be nipped in the bud around the world.

A naïve Ayyub probably doesn’t know that even Modi haters deserve to live their life without any fear. She doesn’t know that not everyone believes in attacking those with a different ideology. If that would have been the case, Ayyub wouldn’t have been allowed to put up the anti-Modi and anti-India tweets on the micro-blogging site.