Ashneer Grover, founder and Managing Director of BharatPe, has resigned from the company. “Today I am being vilified and treated in the most disgraceful manner,” Grover said. Grover wrote a long resignation letter, criticizing the investors who are “removed from reality” and could not sense the problems of the ground. Views of the board members, on business and problems on the ground, have been “coloured by the windows of the Ivory Tower in which you all reside” he said in the resignation letter.

Grover has an illustrious career and an impeccable academic record before he successfully tried his hand at entrepreneurship. Born to a Punjabi Hindu family that migrated to India during the partition, Grover was a bright student and got admitted to the prestigious IIT-Delhi for the Bachelor of Technology course. After B Tech from IIT Delhi, he completed MBA from IIM-Ahmedabad.

Grover got campus placement from IIM-Ahmedabad and took the role of Vice President for Kotak Finance Banking. After almost seven years at Kotak, Grover joined American Express for two years. He left a secure career at an American multinational to join Grofers (now Blinkit) as CFO in 2015. As per his LinkedIn profile, he also joined PC Jewellers as head of new business but left the firm within one year. 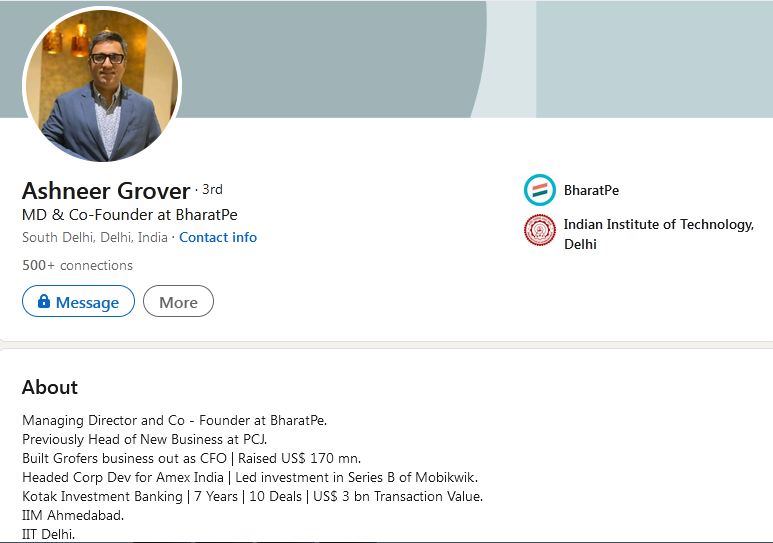 In 2018, Grover decided to start his own financial technology firm BharatPe, and the exponential rise in digital transactions in the last few years due to Unified Payments Interface (UPI) and Corona turned the company into a unicorn in 2021 when it raised $370 million in its Series E round led by Tiger Global Management at a valuation of $2.85 billion. Dragoneer Investor Group, Steadfast Capital, Sequoia Capital, Insight Partners, Coatue Management, Amplo and Ribbit Capital were the other investors in the company.

The company is doing very well financially as the revenues jumped sixfold to 700 crore rupees in FY 21. However, the resignation of Grover can start the downfall of the company because he single-handedly turned BharatPe into a trusted payments technology and loan provider within four years. The investors, who understand very little about the business will be in a controlling position. If bankers could have run the business then the world would not need entrepreneurs, and Ashneer Grover is undoubtedly among the finest brains in the startup ecosystem of the country.

Grover criticized the investors for forgetting what real business looks like. “The fundamental fact is that all of you as investors are so far removed from reality that you’ve forgotten what real businesses look like and have no appreciation for what it took to run this enterprise day in and day out. Your outlook towards BharatPe has been limited to the small window on your Zoom Meetings application, far removed from the sweat of the brow that goes into making BharatPe the business leader that it is. None of you, including the ones based in India, have ever been to our office even once, since the pandemic turned our lives upside down and sought to suffocate the economy. Not even once,” he wrote in the resignation letter.

The company which Ashneer Grover founded and built from scratch has forced him to exit. The story of Ashneer Grover is similar to that of Steve Jobs who was forced out of his company by investors who were “removed from reality”. And BharatPe will face the same fate that was of Apple during to non-Steve Jobs years. The investors with very little business acumen want to run the company according to their whims and fancies, and this will lead to the fall of the company.

During the Shark-Tank episodes, it was visible that Ashneer Grover does not sugarcoat his opinion. He is rather straightforward and takes down budding entrepreneurs who he thinks do not have it in them to cut. He is made to pay for putting honest views.

Finally! India to get its own Data Protection Law

Vision IAS shamelessly justifies its stance after its Hinduphobia was exposed