Lessons from Paytm and Zomato: Never invest in companies that don’t make profits

The share price of startups listed in the last year has tanked in the last few weeks. Companies like Nykaa, Zomato, Paytm, which witnessed a mad rush during the IPOs, are getting investors – neither retail nor institutional. Especially the loss-making Startups which issued shares at premium prices through IPOs have witnessed bloodbaths at Dalal Street. 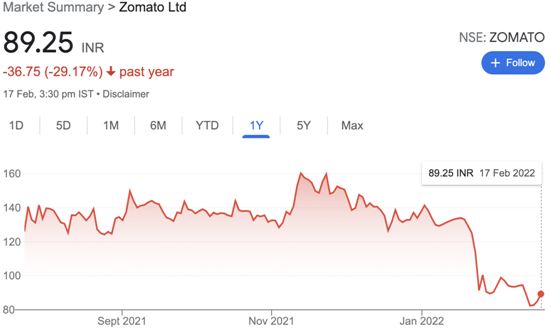 Paytm’s valuation is down by more than 45% from the listing prices. The path to the profitability of Vijay Shekhar Sharma’s company remains unclear, thus making investors wary. Paytm competes in a highly crowded UPI market led by MNCs with endless access to capital, and the other products of the company are not succeeding.

In its 11th year of operation, the company is still a loss-making company. In FY21, when the use of digital wallets and mobile payments surged, the company posted a decline in revenues. Despite a 60 per cent cut in marketing and promotional expenses, the losses continued, and the road to profitability is unclear.

Similarly, Zomato is trading at a price around 30% lower than the issue price. As reported by TFI, Zomato rode the hype train with inflated valuations and managed to bag a lucrative IPO listing. However, even today, observing the food aggregator’s numbers, one would argue it is just a big bubble waiting to burst and go even lower than today’s prices.

There is no denying the fact that despite being loss-making companies with no hopes of breaking even in the coming two three years, Zomato and Paytm rode the hype train with inflated valuations. At the time of the Zomato IPO, a Twitter user and investor named Anurag Singh posted a detailed and nuanced thread dissecting the reality of the bubble of the Zomato IPO which even ignited the curiosity of ‘Know nothing’ investors – a term coined by Warren Buffet.

The user pointed out that the current valuation of Zomato is Rs 66,000 crore or $ 8.8 BN USD. However, a year ago, when the pandemic had not struck the world, the food major’s valuation was $ 3.5 billion and that too after acquiring Uber Eats and its India services. It is imperative to note that Uber Eats has a 9.1 per cent stake in Zomato currently.

However, what appears rather quizzical is the fact that in a pandemic year when the average delivery order value fell from Rs 400 odd to Rs 238, the company managed to scale its valuation manifolds.

India has built a great startup culture in the last few years and new businesses are bringing efficiency, employment, wealth creation, and disruption. However, this system of going to IPO to return the original investor’s money amid the hype and rising number of retail investors, it is advisable to the people to not put their hard-earned money on such risky bets.

When and how did brands start mattering more to the world than quality?