by Tanya Trivedi
in Opinions
0

The advertisement industry has been victimizing the Hindu community to hurt its religious beliefs through various means. Now, it is using Diwali to portray their woke and secular attitude by running vicious campaigns. However, Hindus have swung into action to give it back to the liberal elites and brands and are ensuring that their wokeism bites the dust.

In a recent development, an online store brand for furniture and home decor, Pepperfry, urged people to “forget crackers” during Diwali. Moreover, they were seen sermonising Hindus and tweeted, “Make your home sparkle this Diwali with amazing food, games and beautiful furniture!” 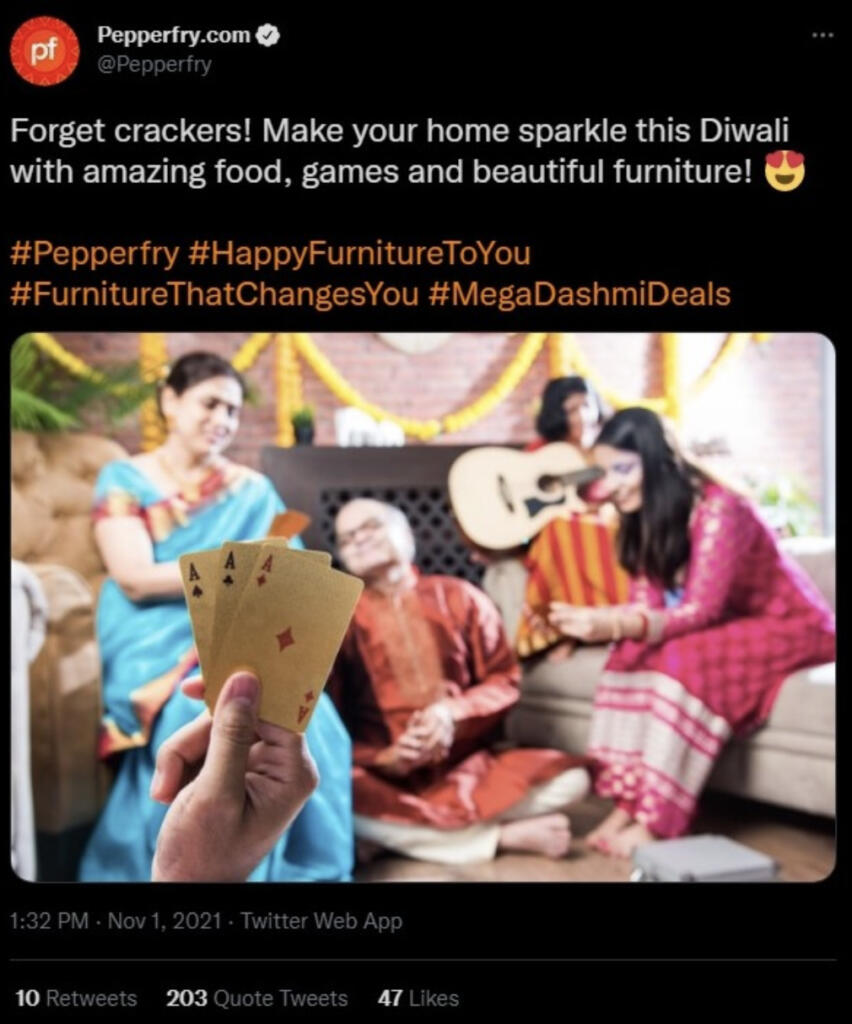 Prior to Pepperfry, Fabindia was caught up in the controversies for its controversial video promoting their new festive collection for Diwali, titled ‘Jashn-e-Riwaaz’, a euphemism for Diwali, or if we put bluntly, a weak attempt to Islamize a traditional Hindu festival. However, after the major backlash by the Hindu community, Fab India deleted the tweet.

Meanwhile, Elle India came out in support of Fabindia and posted a cartoon filled with anti-Hindu bigotry on its Instagram page. The bigotry-driven post condemned Hindus for protecting their religious and cultural heritage from wokeism and forced Islamisation.

The caption read as “it’s the recurring season where Indian fashion labels are schooled on how to creatively incorporate religion while designing their campaigns. Last year, @tanishqjewellery received a non-violent lesson on how to showcase jewellery without meddling with the ancient Hindu-Muslim narrative. Recently, @fabindiaofficial released and pulled down a Diwali campaign titled Jashn-e-Riwaz. Little did they know that the term means long-live Muslims in Urdu and is a secret ode to the Mughals.”

It was only a few weeks back when Virat Kohli grabbed the headlines after he posted a message on Twitter in which he tried to teach “personal tips” on how to celebrate “meaningful” Diwali with loved ones. In the video posted on his Twitter handle prepared in association with Pinterest, Kohli can be heard saying, “It’s been a tough year for all of us all around the world but especially in India with wave 2 hitting hard in 2021. As we get ready for Diwali this festive season, I’ll be sharing some of my tips for you to celebrate with loved ones and family. Stay tuned on Pinterest and pass the light.”

In another CEAT tyres advertisement, Social Justice Warrior and a hobby actor, Aamir Khan was seen giving pep talks to Hindus for the umpteenth time on how to celebrate a Hindu festival. In the ad, Aamir Khan is shown as the supporter of the Indian Cricket team who remarks, “Anar, sutli bomb, chakarghini – today if our team hits sixes, we will also burst crackers. But where? Inside the society. Roads are not for bursting crackers. It’s for traffic.”

Read more: ‘Roads are for traffic, not for burning firecrackers,’ says Aamir Khan on Diwali. Why he needs to shut up

Hindus gave it back to liberal elites

Well, the Hindus, now, have made it quite visible from their actions that no anti-Hindu propaganda will be tolerated and these agendas to demean Hindu culture needs to be stopped now. It is pertinent to note that it was the efforts of Hindus and their huge backlash that led to the withdrawal of anti-Hindu ads by FabIndia and Virat Kohli.

After the netizens gave FabIndia and Virat Kohli a piece of their mind for the Diwali campaign they were forced to take down anti-Hindu ads.

In addition to that, Elle was also countered by the Hindus with concrete facts revealing the fact that Elle stole a cartoon without the creator’s permission. Later after being severely criticised for misrepresentation and copyrights, the fashion magazine had to take down the post.

The companies, nowadays, do not care about Hindus’ festivals, traditions, and heritage. What they only care about are 1.1 billion consumers. Well, the brands and the liberal elites need to improve their campaigning strategies and should be ready to face the repercussions for their negative campaigns as Hindus, these days, are way more dedicated to preserving their own culture. They have decided to take the charge, giving some fierce feedback to the hypocrisy of the liberal elites.

You want us in your green energy agenda, get us in NSG,’ India’s nuclear message to the West