by TFIPOST News Desk
in Economy
1

Tejas Networks, a homegrown high-tech company, is on the path to becoming India’s own Huawei. The company which deals in optical networks, 4G and 5G telecom equipment including switches and routers, has emerged as a major high-technology player in the last two decades. Founded in 2000, the company has built many IPs in various areas of Telecom networking and has emerged as a major exporter to other developing countries in Southeast Asia and Africa.

In the last week of July, Tata Group acquired a majority stake in Tejas Networks in order to make entry into the Telecom equipment market. Tata Consultancy Services (TCS) already has a very strong presence in system integration (integration of different parts of Telecom equipment infrastructure) but on the product side, it was weak given the lack of hardware capabilities.

Tata Group acquired 43.35% of Tejas through preferential issues of equity and warrants for Rs 1,850 crore. Tata Group will acquire more shares of the company and become the majority share owner in the coming months, said the company.

“The deal has a lot of synergies for Tata Group,” said Ashwinder Sethi, principal at management consultancy Analysys Mason. “On the one hand, it is looking to develop its own 5G solution and take it to the global markets. It already has the software and SI (software integration) capabilities through TCS (Tata Consultancy Services) and Tejas helps to bring in the hardware capabilities and also leverage the incentives through the PLI (production-linked incentive) scheme.”

5G, the next generation of the Telecom network, will have more software-driven components. Thus, in the upcoming Telecom infrastructure, the combined force of TCS and Tejas Networks will be a formidable one. Indian Telecom Service Providers (TSPs) like Airtel and Tata Telecommunications have already started giving major contracts for the Telecom infrastructure to the Tata Group.

A few days ago, Tejas Networks bagged the deal for Optical Networks expansion deal from Airtel. Before that a strategic partnership for implementing 5G network solutions for India. “The tie-up is part of Airtel’s 5G roadmap for India as it transforms its networks to allow its customers to reap the full possibilities of the hyper-connected world where Industry 4.0 to cloud gaming and virtual/augmented reality become an everyday experience,” said Airtel after the announcement of strategic partnership. 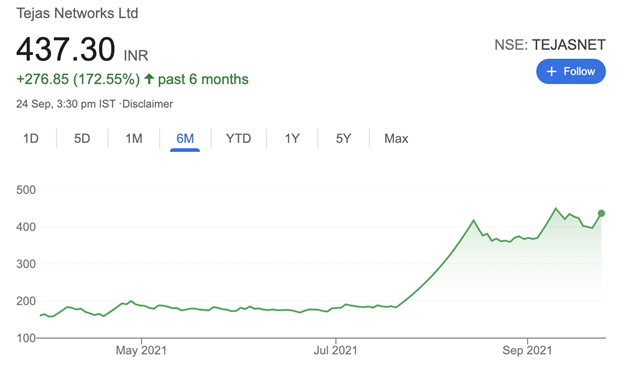 Tejas Networks is also expected to benefit from the PLI scheme to promote Telecom equipment manufacturing in India.

The Modi government is not only promoting the domestic manufacturing of telecommunication equipment but is also encouraging the Indian Information Technology behemoths to work towards the virtualisation of telecom infrastructure. And this will help India to export many segments of the Telecom products of the 5G infrastructure.

In the next few years, India is expected to become a net exporter of Telecom products – especially of open infrastructure equipment being promoted in 5G – and have its own national champions like Huawei and ZTE.