by Mahima Kalra
in Opinions
2

As the curtain draws on the Tokyo Olympics 2020, India – a country of 1.3 billion is still stuck on 2 silver and 3 bronze medals. After Golfer Aditi Singh narrowly missed out on a podium finish, the only hope of another medal is from Neeraj Chopra who will be taking the field later in the day. However, it is indeed difficult to digest the reality that a country as vast and vivid as ours, we have constantly failed to break our gold medal jinx for over 13 years. Surely, it cannot be all pinned down to the government and the lack of facilities for other sports.

Sports in India is still not a conventional career option. Playing sports means deviating from a path of career security as the nexus of teachers and parents ensure that the kid is set on the road laid by them. Sports ‘was’ and ‘remains’ an extra co-curricular activity.

A country’s Olympic dreams can only be fulfilled if grassroots facilities are available, that is a non-negotiable requirement, and the government, despite ramping up the infra has miles to go. However, allowing the kids to practice on those facilities day in and out and not stopping them from taking the leap of faith to venture into the professional arena is the duty of the parents. One, where we are often found wanting.

Read More: Every 4 years, the world conspires to make a laughing stock out of India

There are archaic folklores in every locality about an uncle or a friend doing an unthinkable manoeuvre in the University/College or School games in a particular sport. However, those talented individuals, who only needed to be polished to become an Olympic medal prospect, end up becoming an engineer, bureaucrat, doctor or any of the myriad ‘respectable’ professionals. Such is the dichotomy of growing up in India.

We as the third-person take ultimate pride if anyone of us wins an Olympic medal but for the next four years, we forget what happens behind the scenes in forging those athletes. And instead, we focus the entire semblance of our attention on Cricket. Although the chances of a person becoming an Olympian must be far greater than one becoming a player for the Indian cricket team, our country still runs behind the colonial sport.

The popularity of cricket partly boils down to the private model of administration it has set in place where the BCCI pulls the strings and has managed to grow the game to such gargantuan levels that other sporting events, barely have space to breathe.

Read More: Cricket is destroying other sports in India, Really?

It is not that Indians cannot excel at sports, as any cricket fan will tell you. It is just that an average Indian cannot be bothered to focus on the quadrennial event and probably rates Nobel Prizes and Booker Prize literary nominations higher in importance. Thus, India tends to run its own race, which is different from the entire world.

A larger population pool directly translates into more people to participate in the events, greater competitions that enhance quality, and a larger talent pool to select for more events. But despite having the second largest population in the world, India still ranks in the lower half in most of the sporting competitions.

India scored only 0.05 medals per million people in the 2018 Asian Games. Only 12 countries (including our South Asian neighbours like Pakistan, Bangladesh, Nepal, Bhutan, Sri Lanka, Maldives) fared worse than India of the total 46 participants. Winning double-digit Olympic medals should be the aim but before that, we need to up our game in regional events such as the Asian Games. If we manage to oust giants like China in these games with routine frequency, we will certainly be a potent force in the Olympics. 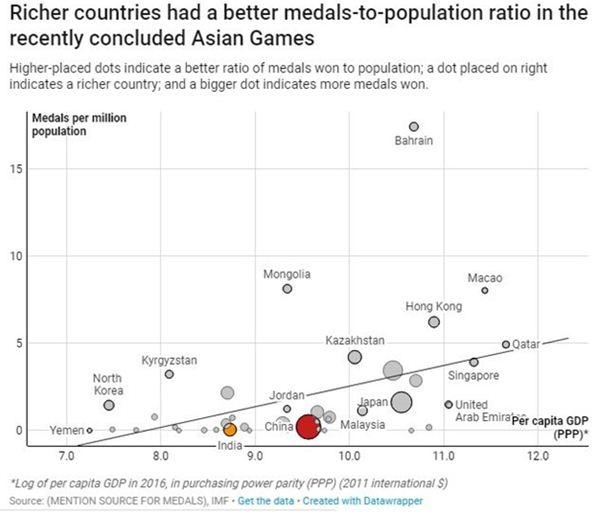 Speaking of China, the country under Xi Jinping has used the Olympics stage as a platform to prove that authoritarian regimes can also produce medallists. And without an iota of doubt, China has fared the best amongst the top nations, even eclipsing the mighty Americans.

India need not take a lot of lessons from China, for it has created a brutal factory line model of churning medal prospects but we can certainly pick a trait or two to improve the medal tally. Sports has become an integral part of Chinese society where parents, once as conservative as Indians are now pushing their kids to the edge.

As India’s per capita income improves, the sporting environment will improve, but once again, the onus will be on the families to take the initiative and push their kids. If the orthodox Chinese parents could change their ways, there is no doubt that with enough fillip, the Indians could pivot to the sporting arena.

Read More: China has performed exceedingly well in Tokyo Olympics, but they are the biggest villains in China right now

As Bob Dylan once sang, the times they are-a changing — we sent the biggest delegation in our Olympic history to Tokyo and if not, it felt this time that us underdogs nearly sniffed up that elusive medal. The reason could primarily be more cogent involvement of authorities and the government funding route that has vastly improved.

Through the Annual Calendar for Training and Competition (ACTC) and Target Olympic Podium Scheme, or the TOPS, the two flagship government sports schemes, aimed at nurturing and polishing the Olympic dreams of the country, the government has ensured that Hockey players are financially looked after.

TOPS was initiated by the Modi government in 2014. After the debacle of Rio, the government has spent Rs 1,200 crore on athletes according to the Sports Authority of India (SAI).

The mantra is simple if India wants to achieve excellence at Olympics. We need to create a sporting environment where even poor families believe that their sons and daughters playing the game can uplift them from the clutches of poverty. Similarly, the government needs to increase its spending even more and create infrastructure at the microscopic levels. Just having few Sporting excellence centres in a few chosen states will not cut the deal. In a nutshell, we need a major overhaul in our attitude towards sports.