The Hindu was creating a fake narrative about an Indo-China flare-up in Galwan, it was exposed by Indian Army

The Hindu, one of the leading publications of the country, championed by the liberals and pro-China lovers unlike has once again peddled fake news. A report titled “Minor face-off with Chinese troops in Galwan Valley” was published by the national daily on May 23, quoting anonymous government sources and claiming that a face-off between the Indian and Chinese troops took place this month in the no-patrolling zone at Eastern Ladakh’s Galwan Valley. 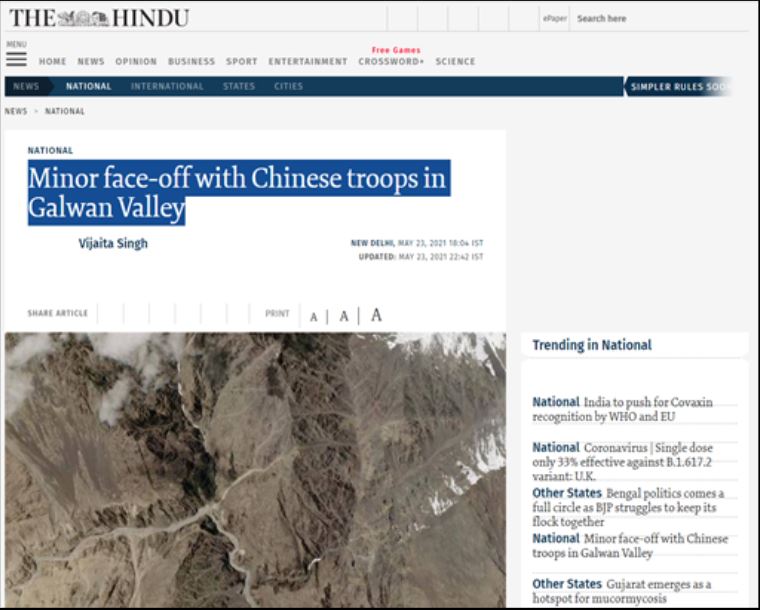 However, the Indian Army quickly jumped in before the liberals could use the fake news story to create an environment of paranoia and psychosis.

“It is clarified that NO such minor face-off has taken place between Indian and Chinese troops at Galwan Valley in Eastern Ladakh in the first week of May 2021 as reported. The article seems to be inspired by sources who may be trying to derail the ongoing process for early resolution of issues in Eastern Ladakh.” the Army said in a statement.

An article titled "Minor face-off with Chinese troops in Galwan Valley" published in The Hindu on 23 May 2021 has been taken note of. (1/4) pic.twitter.com/kBP5K3fvJW

It also added that media professionals were requested to clarify actual versions/positions on incidents involving the Indian Army from authorised sources in the Indian Army and not base reports on un-corroborated inputs from third parties.

“After the no-patrolling zones were created last year, the two sides occasionally conduct reconnaissance to see if the other side has crossed the line. The patrols are sent at different times. On the particular day, the Indian and Chinese patrols reached the area at the same time, a minor face-off happened but they returned quickly,” The Hindu quoted the official as saying in its report.

The Hindu and its history of peddling lies

This is not the first time that the Hindu has peddled fake news when it has come to India-China clash on the LOC. Reported by TFI, in October last year, the news publication misleadingly claimed that PLA troops had occupied the finger 2 and finger 3 regions on the north bank of Pangong Tso lake whilst quoting a former BJP MP Thupstan Chhewang.

As soon as the controversial report of The Hindu came out, the army and the government institutions denounced the news report and termed it as a piece of fake news and a figment of imagination by the esteemed newspaper The Government’s official fact-checking arm PIB tweeted a screenshot of the report and informed that it is fake news and that the Indian Army has refuted the statement.

.@the_hindu citing a claim, has published that Chinese troops have further transgressed into Indian territory and occupied positions in Finger 2 and 3 of the north bank of #PangongTso Lake.#PIBFactCheck: It is a #Fake news. @adgpi has refuted this statement. pic.twitter.com/PvNjUQRCt4

Since a lot of people were asking, when checked last, #India was still holding its positions in the upper areas of north #PangongTso https://t.co/xlxpgUzCk4 pic.twitter.com/G5Ax6drVHf

The Hindu in September 2020 had done similarly done another shoddy piece of journalism when in a report titled, “China controls 1,000 sq. km of area in Ladakh”, the newspaper claimed that “in Depsang Plains, from patrolling point 10-13, the scale of Chinese control of India’s perception of the LAC stood at about 900 sq. km. About 20 sq. km in Galwan Valley and 12 sq. km in Hot Springs area is said to be under Chinese occupation, the official said. In Pangong Tso, the area under Chinese control is 65 sq. km, whereas in Chushul it is 20 sq. km.”

Read More: Why The Hindu newspaper should consider renaming itself to “The Han Chinese”

What is noteworthy is the fact that The Hindu provided no visual proof of its tall, unsubstantiated and hilarious claims. And to this date, the liberals of the country, who rather than believing the Government reports, continue to present this particular report to shame the government, knowing well and truly that The Hindu report has no legs to walk on.

1n A “journalist” known for brazen mendacity claimed India had been pushed back to finger 2. This time series since April shows, far from it, the ITBP camp at finger 3 expanded & we’ve occupied the heights at finger 4. I hope the editors @the_hindu do some serious introspection https://t.co/LZAnYrf6pi pic.twitter.com/0WBlScdDkI

Employed on the payrolls of Chinese masters, the national daily has a habit of routinely churning out such news reports. However, as TFI had prophesized last time — it is not the last instance that the Hindu is publishing an untrue story without following the basic tenets of journalism viz. integrity and truth. Expect more such vendetta driven pieces in the future as well.

From 2DG to UV disinfectant: How govt-run institutes like DRDO are partnering with private players to ensure quick delivery