Despite the ravaging second Coronawave across the country, the stock market indexes are moving northwards with every passing day. And this has intrigued and demoralized the leftist economists, who, otherwise, would have used indexes to argue that the Indian economy is heading towards a bleaker future. Many columnists, including the people like Andy Mukerjee, Kaushik Basu who are very influential in the left-liberal ecosystem, have argued that the stock market and the macroeconomy of the country have no sync.

These people are saddened by the good performance of the stock markets and continuous equity inflow from domestic as well as foreign investors. What these excessively opinionated and little analytical people fail to understand is that most of the big investors make investments keeping the long term growth story of a country in mind. And, investors around the world are convinced that the long term story of India’s growth is going to be positive, in spite of short term setbacks like Coronavirus. “Economic growth will be tempered by the second wave in 2021, but growth will be strong this year and the long-term outlook is quite positive,” said Tom Masi and Nuno Fernandes, co-portfolio managers at GW&K Investment Management. “Short-term investors will be compelled to step aside, but long-term oriented investors understand the opportunity.”

The political stability in the country and a reformist government coupled with demographic dividend are the right mixtures for the economic growth of any country and India has all these ingredients at this time. 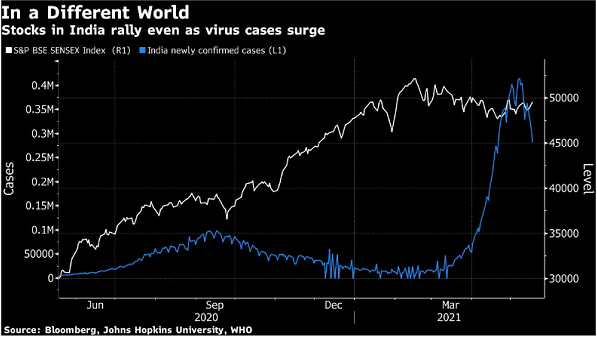 The policy analysts, economists and corporate houses around the globe have given positive reviews about the economic policies of the Modi government. Some of the most important economic reforms which were waiting in the policy corridors since the last few decades like- farm laws, labour laws, GST, Insolvency law, rationalisation of corporate and income tax, were implemented by the Modi government in the last few years.

The GST was waiting for implementation in the policy corridors for almost three decades, as the previous governments could not bring all the stakeholders together to implement the uniform indirect taxation. But the Modi government has been able to build consensus for the implementation of GST in one of the most complex markets around the world. GST has helped increase the number of indirect as well as direct taxpayers. Top economists have predicted that GST will improve the GDP growth of the country by 1-2 per cent.

Similarly, the IBC is solving the bad loans crisis of the Indian economy, which has slowed down the credit for the past decade. Given the structural reforms in the Indian economy, the long term prospects look better for India when compared to the rest of the world which is dealing with acute slowdown and hopelessness amid the pandemic.

The market in India is flooded with liquidity and once the danger of Coronavirus ends, there will be a huge surge in investment as well as consumer spending. Many sectors like Information technology, financial services, and agriculture are already performing better than the pre-pandemic years, thanks to economic reforms and fundamental changes in the macroeconomy brought due to Coronavirus. The other sectors too will pick up once the threat of the virus is over and the economy will grow like never before. The leftist economists are blissfully ignoring these factors and are coming up with absurd theories (like the one by Andy Mukerjee) to explain the stock market indexes.

The Hindu was creating a fake narrative about an Indo-China flare-up in Galwan, it was exposed by Indian Army